Some new set photos from The Batman have surfaced and they are certainly going to open up an interesting discussion about what we might see in the film. Director Matt Reeves has been filming for several weeks now in the U.K., with Robert Pattinson set as out new Caped Crusader. Some pictures from the set have been making their way online and this most recent batch may hint at the arrival, or pending arrival, of a classic villain.

The photos, posted by the Film Updates Twitter, showcase a bunch of people running around Gotham City with their faces painted in clown makeup. They look like they could have been ripped right out of The Purge, which is quite interesting. It does make one think of the climax of Joker a bit. To that point, even though the makeup is significantly different, a bunch of guys putting on clown makeup in a Batman movie can only point to one thing, right? Are these photos teasing The Joker?

Some photos from the set of Matt Reeves' #TheBatman ?. pic.twitter.com/QkY6xMIkcz

We already know quite a few famous villains from the pages of DC Comics will appear in The Batman, but nobody has been cast to play Joker. Be that as it may, Reeves could be playing the long game, planting seeds that will blossom into the Clown Prince of Crime down the road. Or maybe this has nothing to do with Joker at all. Either way, they’re interesting to look at.

“The cast is so awesome. It seems different from other Batman movies to me, just with the cast,” Sarsgaard said during the Television Critics Association press tour.” There’s something about it that has an edge, it’s young. To me, just my perception of it, it reminds me of when I was in college, and I went to go see The Pixies play, and looking around and feeling the vibe at a Pixies concert. That’s what it felt like to me, a song like ‘I Bleed.’ That it has the energy and that sort of thing, and isn’t so specifically targeted to a very young audience, or a very old audience, but has that power of chaos in it.”

So what do you think? Do these photos signal the arrival of The Joker? Do they mean something else entirely? Join in on the conversation over on Facebook or Twitter! 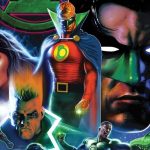 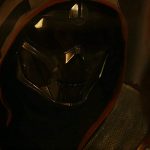