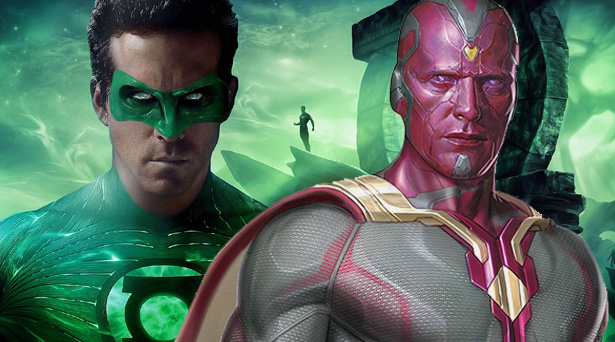 If Marvel is the king of the comic book movie, DC is the prince in waiting. There is absolutely no doubt that no other comic book companies can rival them on the big screen – much like the situation with the comic books themselves.

Unfortunately – unlike in the world of comic books – the movies are very unlikely to ever crossover. Hell, Marvel have enough trouble getting the rights to their own characters (what with the likes of Fox, Sony and Universal owning or having owned the rights to certain Marvel properties over the years).

With that in mind, the idea of ever seeing official live action fights between DC and Marvel characters is slim to zero, so it’s fun to imagine it happening.

In this article, we’ll create ten fantasy bouts between DC and Marvel movie characters (and predict the winner of each bout – which you may or may not agree with) and ask you to suggest some of your own. Here are ten DC Vs Marvel movie character battles we’d love to see (note that the author will consider Vertigo and Wildstorm properties to be a part of DC). 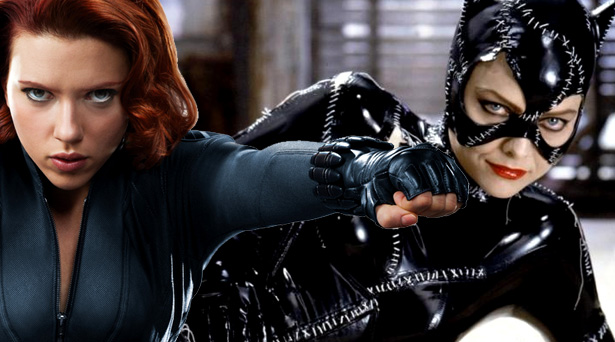 Catwoman’s acrobatics and minor superhuman attributes would ensure the agile and skilled Black Widow was given an extremely tough fight.

The battle would be a tantalising mesh of black leather and would be a sight to behold, but we can’t help thinking that Black Widow’s standard weaponry (guns and taser-type energy weapons) would tilt the bout in her favour come the end – even considering the apparent nine lives possessed by Catwoman. 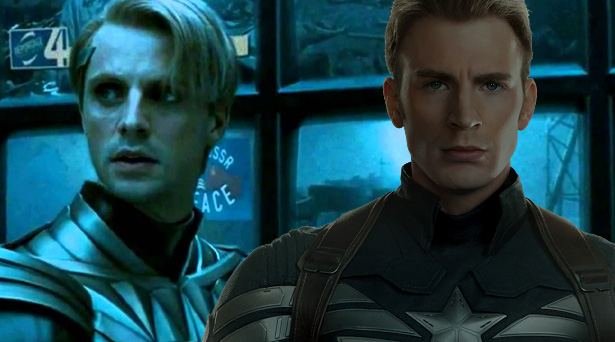 Captain America may be a super soldier, but it’s not as though he has superpowers as such. Granted, his strength and durability are absolutely incredible by real world standards, but when it comes to comic book characters, he shouldn’t be going up against people with genuine superpowers in a fair fight.

Step forward Ozymandias. While Matthew Goode’s character didn’t have actual superpowers, he demonstrated speed enough to dodge a bullet and, as such, would be one hell of an opponent for Chris Evans’ Captain America.

As good as Captain America is – and as much as his shield would help him to tank some of Ozymandias’ attacks – that superior speed (which helped him kick Nite Owl and Rorshach’s butts at the same time, remember) should help the villain win out in the end. 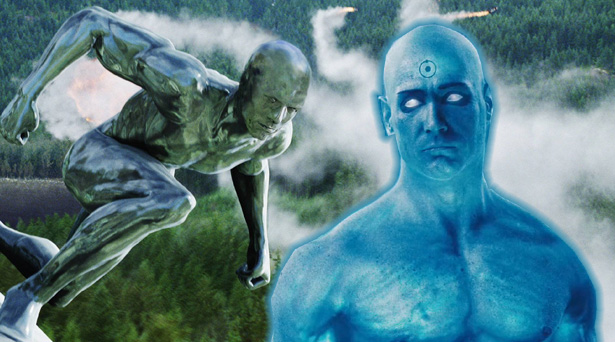 Two of the biggest powerhouses in the history of DC and Marvel movies, Doctor Manhattan and the Silver Surfer both possessed extremely versatile abilities.

The Silver Surfer – played by Doug Jones but voiced by Laurence Fishburne – was a Herald of Galactus who came to Earth to prepare it for his master to devour. He possessed flight, superhuman strength and durability, the ability to absorb kinetic attacks and the ability to alter matter, amongst other powers and was more than a match for the Fantastic Four on his own. Doctor Manhattan, however, essentially became a god – Billy Crudup’s character was able to teleport, alter matter, create forcefields and perceive time, space and matter on an almost omniscient level.

As interesting as a fight between these two characters would be – and it would look cool as hell to boot – Doctor Manhattan would win out in the end. 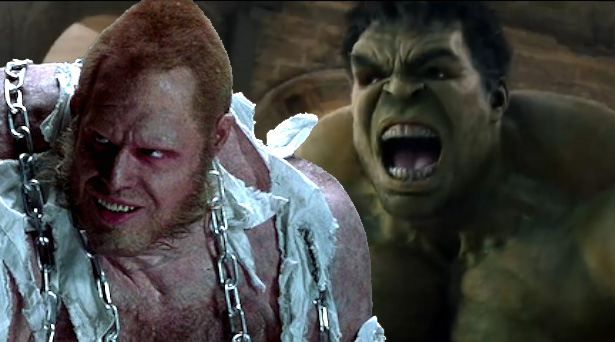 Very few DC movie characters look the part when it comes to being a physical match for the Hulk, but Mr. Hyde of The League of Extraordinary Gentlemen fame (which is a Wildstorm property – an imprint of DC, in case you were wondering) certainly does.

Unfortunately for Mr. Hyde, however, he is simply nowhere near as strong as Hulk and the Marvel Cinematic Universe character and Avengers member played by Mark Ruffalo would handily defeat Jason Flemyng’s character in short order. Both men have superstrength and durability, but the levels at which they possess those abilities are very different.

That being said, the initial visual of the two muscle-bound brutes facing each other would be a spectacle unto itself and make it worth having the fight happen regardless – and it would be quite satisfying seeing the angry Hyde pummelled easily into submission anyway. 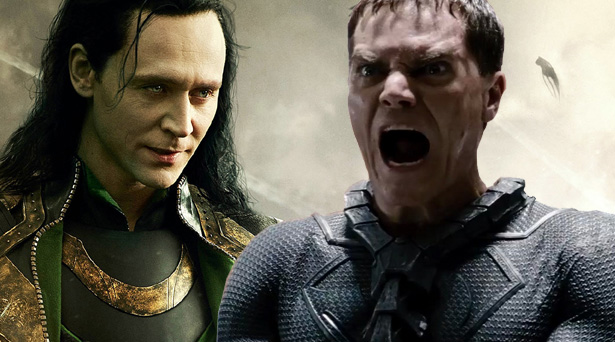 Being two equally villainous characters who came to Earth and viewed humanity as mere insects, you might think Loki and General Zod would be the best of pals – but that’s actually pretty unlikely, given their personalities.

A fight between the two wannabe-gods would be a close affair, with Loki utilising magic illusions to make it last longer than it otherwise would. Loki is, of course, superhuman in terms of his physicality himself, but the flight capabilities, ranged attacks, super-senses and superior physical might of the Kryptonian war general would overcome Thor’s adoptive brother in the end.

Two predominantly green characters with extremely versatile powersets go head-to-head now, as Ryan Reynolds’ Green Lantern and Paul Bettany’s Vision duke it out in what would be a battle of epic proportions.

Green Lantern AKA Hal Jordan was granted the powers of a Green Lantern Corps Power Ring when the alien Corps member Abin Sur perished. He was granted flight, a personal forcefield and the ability to make powerful energy constructs using his will alone. Vision is an android made of a vibranium body, brought to life using the A.I. J.A.R.V.I.S., the Mind Stone and a blast from Thor’s hammer Mjolnir. He can fly, possesses superhuman attributes, can alter his own density and fire energy blasts.

It would be one of the closest fights on this list, but we imagine Vision’s indestructible body and his ability to turn intangible will give him the win ultimately. 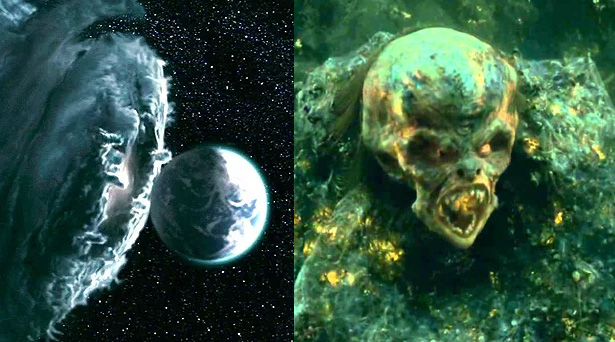 Really, nobody gives a damn about either of these characters, as they were both horrendous depictions of said characters who appeared in terrible movies.

Both Green Lantern’s Parallax and Fantastic Four: Rise of the Silver Surfer’s Galactus were essentially just giant clouds – far cries from the bright yellow fear entity and the giant humanoid in the purple helmet seen in the DC and Marvel comic books respectively.

Frankly, it would just be satisfying to see them kill each other, perhaps with each one attempting to devour the other and having them both collapse into themselves in doing so. We can dream anyway. 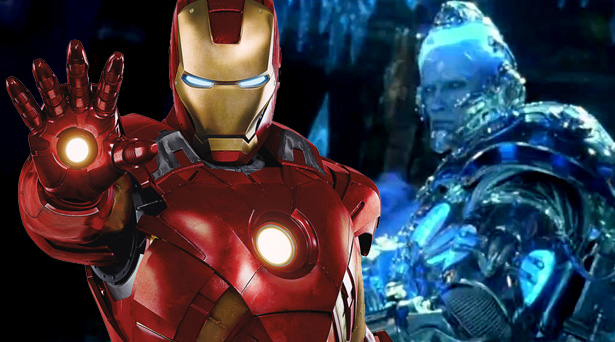 Looking for a decent armoured villain in a DC movie for Marvel’s Iron Man to go up against resulted in slim pickings – and it was never going to be Shaquille O’Neal’s Steel, let’s be honest – so we’ve gone for Arnold Schwarzenegger’s Mr. Freeze.

While it’s something of a mismatch in terms of their power levels (Iron Man should be winning this one easily), the banter between Arnie and Robert Downey, Jr.’s characters would be pretty epic – and that’s reason enough to pit them against each other.

Mr. Freeze’s armour is fairly flimsy and his only real worthwhile offensive power is his freeze gun, whereas Iron Man can fly, is incredibly durable and strong and possesses a variety of offensive weaponry, including missiles, lasers and repulsor rays. After some epic insults were thrown around, Iron Man would win in extremely short order, however. 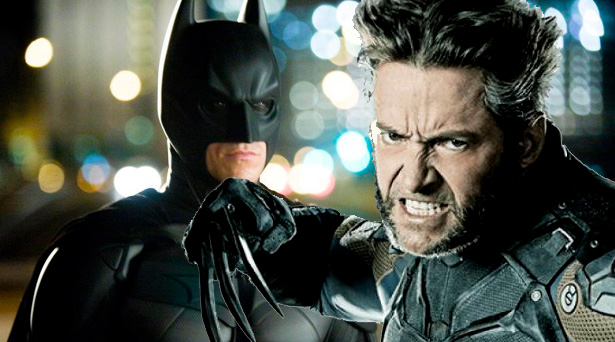 Two troubled, dark heroes with very different life philosophies and fighting styles, Christian Bale’s Batman of DC fame and Hugh Jackman’s Wolverine of Marvel fame coming together for a battle would be one hell of a spectacle.

Batman AKA Bruce Wayne is trained in various fighting styles and has the usual array of Bat-gadgets to turn to in combat, while Wolverine AKA Logan is a feral, ferocious beast of a man with a regenerative healing factor and adamantium bones and claws.

While Batman might be able to outmanoeuvre and out-think Wolverine for much of the fight, the fact is there is very little he could do to permanently put him down and, as a result, the mutant and X-Men member would surely overcome the Dark Knight eventually and violently take him down with his indestructible claws. 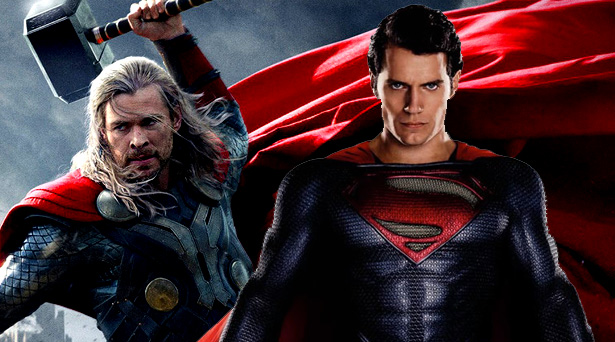 This is it – the one everyone would love to see. It’s the one that, if DC and Marvel could ever strike some kind of mega-deal for a crossover movie (which is incredibly unlikely), would be the final battle – Henry Cavill’s Superman versus Chris Hemsworth’s Thor.

The two heroes are effectively gods amongst men in their respective movie universes and their powersets are remarkably similar, which would make for an epic fight. Both can fly, both have superstrength and durability, but both are yet to demonstrate the level of superspeed they show in the comic books – which makes it a lot closer than it otherwise would be (Superman is considerably faster than Thor in the comics). They both have ranged attacks too – Superman with his heat vision and Thor with his lightning.

As a more seasoned warrior – and with the MacGuffin that is Mjolnir – you have to think that Thor would be the man to come out on top in this battle. However, it would be bloody, brutal and long.

What do you think? Would you like to have seen these fights happen in live action? Do you agree with our views of the outcomes of said fights? Which other DC and Marvel movie characters would you like to see go at it with each other? Have your say below. 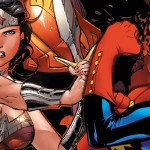 Wonder Woman Vs Captain Marvel: Who Wins?
Next Post 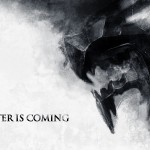 Will Jon Snow be in Game of Thrones Season 6?