Ah, Identity Crisis, the great divider. A comic so beloved by some and hated by others that it's polarizing as hell. I tend to fall on the middling side of "dislike". I don't absolutely hate the series. It has some good moments, but overall, I think it’s bad on a couple levels.

I wouldn't go as far as ComicsAlliance writer Chris Sims, who's referred to the series as the worst comic book of all time, but I do think it's flawed and worthy of some serious discussion. And so, in the style of my Superman: Grounded and Avengers #200 breakdowns, we're gonna go through the miniseries in depth and analyze the book on a much more serious level. Again, if you like Identity Crisis, this is not a condemnation of you as a person, just the work.

OH, and also, like Avengers #200, this series uses rape as a plot device, so if that's a trigger for you, consider yourself duly notified. 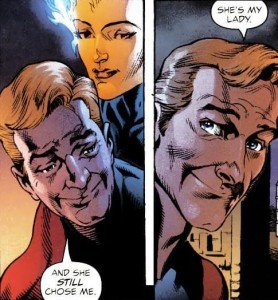 Identity Crisis opens on The Elongated Man (Ralph) and Firehawk sitting on a roof, figuring out a mystery. You see, Ralph's wife, Sue, has sent him off to solve a fake mystery so she can plan his surprise birthday party. It's cute.

Now I know it probably seems petty to point out this tiny little moment as bad, but it’s important to understand the overall problem with Identity Crisis. It's cynical. Really cynical.

The nose twitching, which was a staple of the character's light-heartedness, is apparently a put on. And Ralph takes an opportunity to be mean to his longtime friend behind his back. It's not funny, it's just needless and it misunderstands the characters. And we're just getting started. 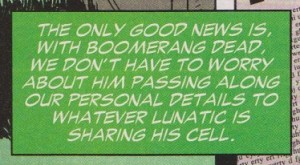 Identity Crisis has a billion narrators.

That's more than a new narrator every two pages. And it really does a lot of damage to the story. It lacks perspective, with no real main character or protagonist. Or antagonist, even. There's a villain, sure, whose presence isn't felt throughout the majority of the story. The overabundance of narration is clearly meant to make the story feel big, but in reality, it only makes the thing feel disjointed.

When characters like Black Lightning and Bolt get full pages of narration each, when they serve NO PURPOSE IN THE STORY, it just pulls the focus away from what's actually supposed to be important. And I have no idea what's actually supposed to be important, because it seems like everything is. Most of the scenes in Identity Crisis feel like deleted scenes from a better comic book. 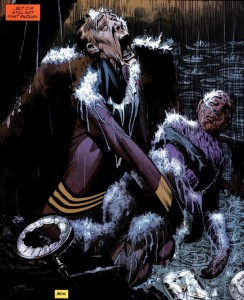 8. The opposite of a Mary Sue

First, I'm gonna say that I find the term Mary-Sue to be really stupid and idiotic. But Sue Dibny in this story is as far from that BS stereotype as physically possible.

SHE HAS NO CHARACTER.

Sue Dibny was a character, but in Identity Crisis, she's given half a scene before she's murdered. As a result, her murder has no impact. It is just an event, not a death. There's nothing about it that makes me feel anything. I barely know this woman at this point in the story, why do I care whether she lives or dies? I mean, I do, because I've read decades of comics in which she appears, but why would any new reader care?

Sue is thrown away in this story like a blank slate. She's there to die and that's it. And we'll talk about that way, way later, but for now, let's just say its not a GREAT way to write a character. 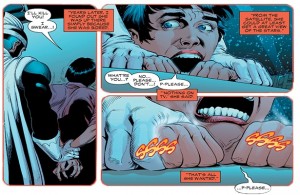 7. Yeah, I’m not gonna come up with a cute pun as a title for this entry

So things are gonna get uncomfortable for a minute here, and I am going to make significantly fewer jokes about the content of the story.

After Sue's funeral, Ralph gathers a squad of "˜80s Justice Leaguers to go after Doctor Light. Flash (Wally West) and Green Lantern (Kyle Rayner) are caught eavesdropping and Ralph explains to them a tragic story of the League's past.

It turns out, back in the 80's Doctor Light broke into the JLA satellite when only Sue Dibny was there. He attacked Sue and sexually assaulted her before the league returned to save her.

This scene is"¦ needlessly shocking and dark. It's unnecessary and ugly, especially in the context of the story. Personally, I'm against just about all depictions of sexual assault in comics, as it’s really really hard to not come off as exploitative. Alias dealt with the theme well, but here it seems gratuitous and badly handled. 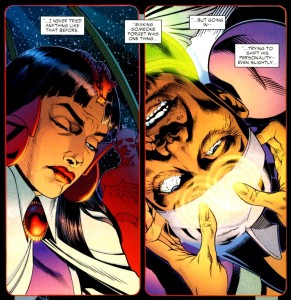 6. “What’s the last thing you remember?”

In this scene, the Leaguers catch Doctor Light and mindwipe him, also forcibly changing his personality. This is an unforgivable action that taints those early stories irrevocably for me.

The League’s altering of Light's personality, and essentially mentally handicapping him by accident, is kinda horrifying. It's like one of those "what if the Justice League were morally bankrupt jerkfaces" imaginary stories. And if it sounds like that, it's only because it TOTALLY IS FROM ONE OF THOSE IMAGINARY STORIES.

The Justice Lords two-parter of the Justice League cartoon used villain lobotomization as the moral no man's land to show the evil nature of the team. Oh, and there's also the fact that the whole "what if the Justice League started altering the minds of villains" thing is blatantly stolen from Squadron Supreme. And in both of those stories, mind alteration was seen as a morally reprehensible action, from which there was no coming back.

But not Identity Crisis, no. That one don't care about no mind-wiping. 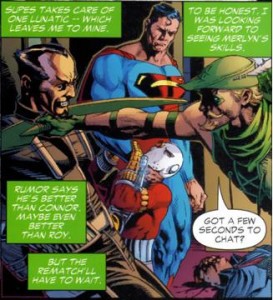 I've mentioned that Identity Crisis is really cynical, and really gratuitous, but it's also incredibly petty.

It takes shots at and trashes huge parts of the DC Universe with throwaway lines and moments. Take, for example, its numerous shots at the Suicide Squad. The League seems to view the Suicide Squad as villainous and evil, using its members as a suspect list for Dibny's murder. Suicide Squad was not just one of the most innovative titles at DC for years, but was also a vehicle that turned its characters into DC icons. Suicide Squad MADE Deadshot and gave Captain Boomerang more character. But instead of using that, Identity Crisis just turns them into one-dimensional caricatures, before shuffling Boomerang out the door for good.

A book like Secret Six, a true successor to Suicide Squad, took the idea of bad guys being real characters and ran with it. But Identity Crisis takes a very simplistic and cynical look at villains. And then it continues to jab at the Squad for the rest of the series. Because that isn't petty, at all.

Before I go on to another criticism, I want to call out something I really like. The creepy notes sent to the families of superheroes are really well done. Lois's note is particularly great.

But on to the negatives.

Here, we get a scene that couldn't be a better representation of Identity Crisis if it tried. In a pointless, mostly meaningless fight, Firestorm, alias Ronnie Raymond, and sometimes Martin Stein, but not in this case, is stabbed and explodes.

Firestorm is the quintessential "˜80s Justice Leaguer, so to see him literally cast aside like the spirit of the stories he represents is disheartening at best.

Identity Crisis is about forcibly murdering the joy of bronze age Justice League stories and replacing them with pseudo-serious "realistic" drama, and murdering Firestorm is the best way to go about doing that.

The only good thing to come out of Firestorm's death was the introduction of Jason Rusch, but that wasn't even in Identity Crisis. 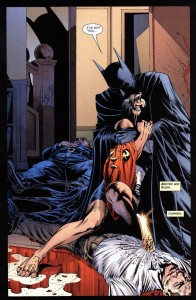 3. Meet the new Robin, same as the old Robin

I've called Tim Drake the best Robin before, and I still stand by that call, but one of the best things about him was that he was different from his predecessors.

Tim became Robin at a later age, and did so only after figuring out Batman's secret Identity himself. At, like, 9 years old. That's hardcore.

Another difference was that Tim actually still had a parent in the picture. While his mother had been killed, Tim's father was still very much a part of his life. This gave him a very different dynamic with Batman, and made him a much more interesting character. Tim was a great teen hero in his own right (there's a reason he was the first Robin to get his own series). But Identity Crisis decides to strip his individuality by killing Jack Drake and making Tim Drake the same as every other Robin ever.

We've seen orphaned Robin as Batman's son before. We hadn't seen a Robin who had his own life until Tim, but Identity Crisis decided to make it all the same as Jason and Dick before him. Dick and Jason both got to be their own people, so I don't see why Tim had to be Dick Junior for all intents and purposes. But whatever, who cares except me. 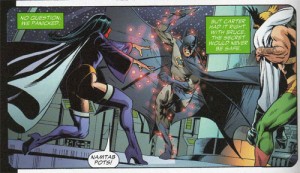 "Ok" I hear you saying " I get that the story isn't great, but aren't you overplaying the terribleness of the whole mid wiping thing?"

The mind-wiping thing is reprehensible on every single level, but it gets worse. Because then we get the story of how batman caught them mind-wiping someone once and (rightfully) freaked the heck out. So what did the League do?

This moment is the lowest point in the story for me every single time. It makes the League morally reprehensible. It's a decision that actively ruins and damages the characters involved on a fundamental level. Barry Allen helped wipe Batman's mind so that he could mindwipe other supervillains. I hate typing out that sentence SO MUCH. So thanks, Identity Crisis, for making it true. 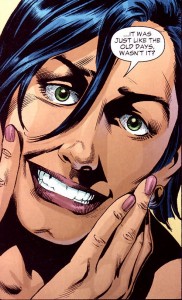 The story ends by revealing that The Atom's ex-wife, Jean Loring, was Sue's killer and (indirectly) Jack Drake's killer, as well. She only intended to scare the two, with the hope of frightening her ex-husband into getting back together with her. Loring is locked up forever in Arkham, and The Atom is all sad and stuff.

For those who don't know, the concept of Fridgeing comes from a piece by comics writer Gail Simone in reference to the process of killing or otherwise disposing of female side characters for no other purpose than giving a male character "development". The process is troubling, because it's seen as wasting a character in a hacky method when a better writer could find a less wasteful way to develop a character.

The name comes from an early issue of Kyle Rayner's tenure as Green Lantern, in which his girlfriend is chopped up and left in his refrigerator by D-list villain Major Force.

Sue Dibny is INARGUABLY fridged in this book. Like, her death is a plot device for every character, EXCEPT her. It's distressing. And such a waste of such a great character, too. In fact, I'd argue that Jean Loring and Jack Drake (even though Jean isn't killed and Jack's a guy) are both fridged in Identity Crisis as well. Both characters are removed from the playing field to give other characters motivation they don't actually need.

Oh, Identity Crisis, I don't like you very much and writing about you has only made me madder, but you aren't Avengers #200, so I guess you get a pass on most fronts. Next, I'll  write about something that makes me happy.

Deadpool 2: Characters We Would Love to See
Next Post 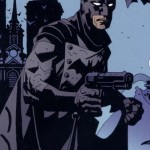