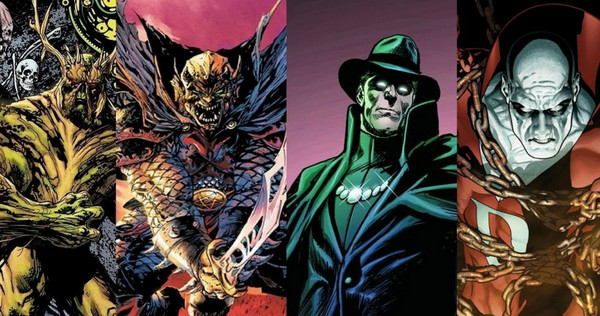 Rumor has it Justice League Dark, alternately titled Dark Universe or spelled with a colon, will be released no sooner than 2018. Quite a lot to wait, but enough to stir up speculations and to cling on tidbits. The production is supposed to bring together the intriguing characters of Zatanna, Deadman, Spectre, Swamp Thing and John Constantine.

What about the plot? What about its connection to Justice League, the world of the likes of Batman and Superman? Fans are still at a loss: nobody airs out any details about Guillermo Del Toro's Justice League: Dark. Well, of course, except the reassurance the script is completed.

Who's who in Guillermo Del Toro's Justice League Dark?

One bit of specific info was revealed. Del Toro, fascinated from an early age with the likes of Etrigan and Swamp Thing, makes John Constantine the chief character. Without losing their standalone quality, all the other characters are drown in the intricate plot.

The plot is not typically linear, such as it is a story based on the completion of a mission. On the contrary, it's quite meandering, with a focus on revealing key details about each of gloomy A-listers of Justice League Dark. In a way, each one has their own mission, e.g. to solve mysteries from their past. Eventually, to come to peace with themselves, if this notions makes any sense at all in the Dark Universe. And it does, actually.

After submission to Warner Bros., the studio's feedback is still on hold. Fans hold their breath and hope for a favorable reaction that will eventually send the script to production. Nothing can be anticipated. The only remaining certainty is even if the studio approves of the script, years will pass until Guillermo Del Toro's Justice League Dark will make it to the big screens.

But everyone can find the strength to overlook Del Toro's constant deferment. He has already rewarded us with plenty of masterpieces pertaining to a variety of genres.