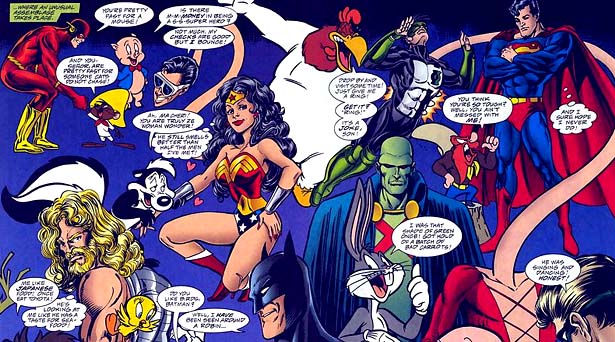 What are crossovers? Well, a crossover can happen in any form of fiction and occurs when two different franchises meet in unlikely scenarios – often due to collaborations between different companies.

Movie examples of crossovers include things like Alien Vs Predator, Freddy Vs Jason and King Kong Vs Godzilla – but the form of media in which most crossovers occur is undoubtedly comic books.

Things like DC and Marvel crossing over are fairly commons. Spider-Man and Superman have met, for example, as have Batman and Wolverine, and countless stories involving characters in the two companies have been published. However, there are countless examples of less likely meet-ups.

This article will list ten of the most unlikely and bizarre crossovers in comic book history! 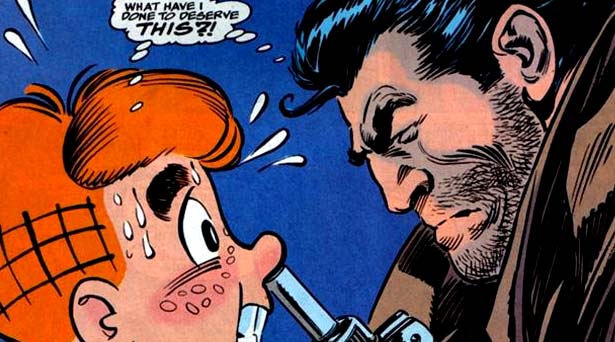 The lovable, red-headed, all-American Archie Andrews – star of the Archie Comics – is an unlikely character to ever cross paths with Marvel’s murderous anti-hero vigilante the Punisher, but that’s exactly what happened in a 1994 one-shot comic book crossover.

The plot was that the Punisher was tasked with apprehending – but not killing – a drug dealer named Red, who happened to look exactly like Archie. After initially attempting to apprehend Archie, he soon realised his mistake and ended up teaming with the teenager when his girlfriend, Veronica, was kidnapped by the actual Red.

The comic featured cameos from the likes of Sabrina the Teenage Witch and made references to the likes of Doctor Strange – and in that sense it was fun – but it was mostly ridiculous nonsense!

The unlikely pairing of Superman and Bugs Bunny come from completely different worlds, so having them meet each other seems incredibly silly – but it did actually happen in a four-issue comics miniseries released in 2000 by DC Comics.

The meeting occurs thanks to the reality-warping craziness of DC’s Mr. Mxyzptlk and Looney Tunes’ Yoyo the Dodo. After they meet each other in a random dimension, Mxy learns that the Looney Tunes world has no superheroes and decides to let them meet some by sending them the the DC universe.

The comic has appearances from a number of characters from each franchise – the likes of Green Lantern, Marvin the Martian, Foghorn Leghorn and Plastic Man, for example – but it is Superman and Bugs who star. It’s fun, but extremely nonsensical. 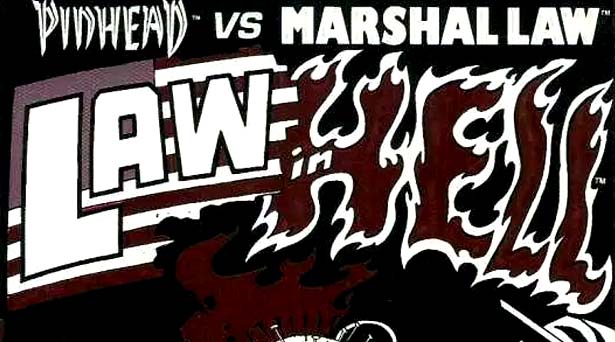 Hellraiser and Marshal Law couldn’t really be any different as far as franchises go, but the two main characters of each franchise crossed over in a 1993 comic published by Epic Comics.

Marshal Law is an extremely violent satire on the superhero genre, while Hellraiser is a horror comic based on the film series of the same name, and the violence and gore is the only thing they have in common – there’s not usually a supernatural element to the former – but it was a decent enough read with plenty of violence and gore. 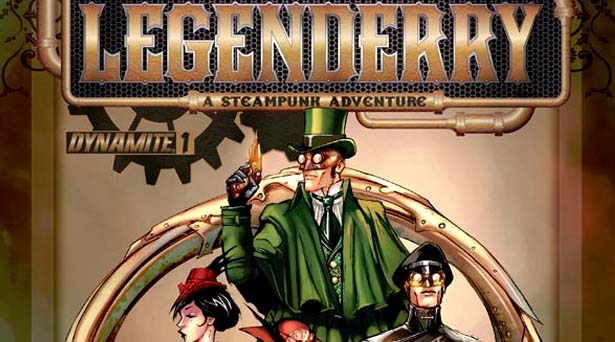 In January 2014, a seven-issue mini-series was published by Dynamite Comics which introduced a steampunk world in which a load of legendary figures resided.

Steampunk versions of the likes of the Phantom, Vampirella, Captain Victory, The Six Million Dollar Man, The Green Hornet and Kato, Flash Gordon, Silver Star and Red Sonja were just some of the characters who lived in the world, which resulted in a really interesting adventure.

It all takes place in a big generic city where each of the characters has a role – Vampirella runs a nightclub there, for example – and it’s a lot of fun. It’s clearly designed for the reader to have fun, without walking away expecting to see the characters together again – making it an extremely worthwhile literary adventure. 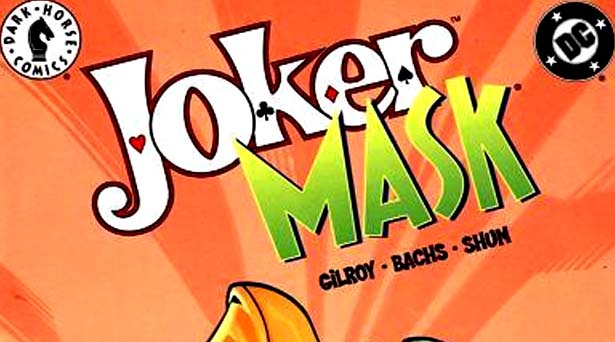 Two of the craziest characters in all of fiction are the Joker and the Mask – that’s undeniable – so could they possibly get any crazier? And is there really any need for them to? Well how about combining them?!

That happened in the year 2000 in a collaboration between DC Comics and Dark Horse, when the Batman villain got his hands on the Mask when it turned up in a Gotham City museum.

He donned it and went on a crime spree – acting even crazier than normal – but was defeated when Batman tricked him into taking it off, citing the fact that it was making him unfunny and reliant on overused and tired schtick. The Mask ended the story being buried with the corpse of its classic wearer – one Stanley Ipkiss. 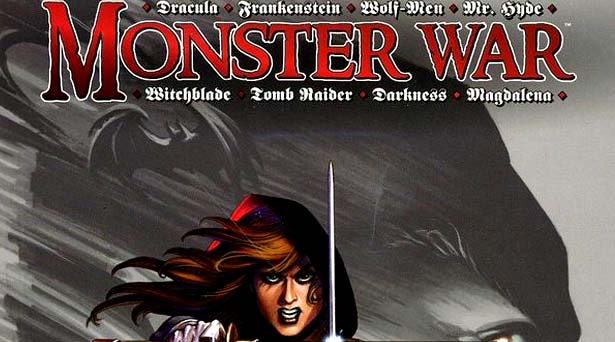 A collaboration between Top Cow and Dynamite Entertainment, 2005’s Monster War was a four-art series that saw four of Top Cow’s flagship female heroes going up against a team of classic monsters.

The story teams Magdalena, Witchblade, the Darkness and Lara Croft: Tomb Raider together against the dark forces of Dracula, Frankenstein’s Monster, the Wolf Men and Mr. Hyde.

In spite of the usually reliable classic monsters present, monster fans will be disappointed with this one, as they are extremely disappointing. Surprisingly – even more surprising than the fact this weird crossover exists in the first place – this story just seems like an excuse to showcase the scantily clad female heroes and it suffers significantly in terms of its plot as a result. 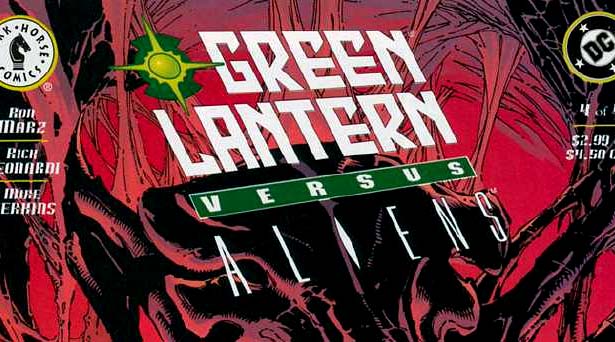 The Xenomorphs, who are most notably simply known as the Aliens have crossed over with a number of different characters from fiction – most notably the Predators, of course – and they include DC’s Green Lantern Corps.

It was in a year 2000 collaboration between DC and Dark Horse, in which the Corps stumble across the Xenomorphs in space. Not believing they were evil, but simply seeing them as space sharks – perfect killing machines who kill to survive – they opted to send them to the uninhabited sentient planet Mogo, rather than destroying them, but it turned out to be an error of judgement.

A fight between the two titular groups ensued, but it seems weird because the gulf in power is so vast – the Aliens really shouldn’t be any kind of threat to the Green Lanterns – but that’s crossovers for you! 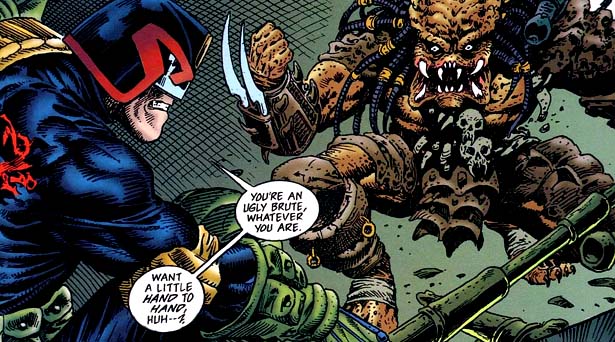 The Predators – also known as Yautja or Hish-Qu-Ten – have crossed over with a number of different fiction characters, most notably the Aliens AKA Xenomorphs. Others include the likes of Batman, Superman, Tarzan and the Terminator, but none have been more unexpected than Judge Dredd.

It’s a pretty awesome conflict between the two titular characters in particular and, interestingly, introduces a Judge (Judge Schaefer) who is said to be the niece of Major Alan “Dutch” Schaefer – the character played by Arnold Schwarzenegger in the first Predator movie – who teams up with Dredd to stop the hunt. 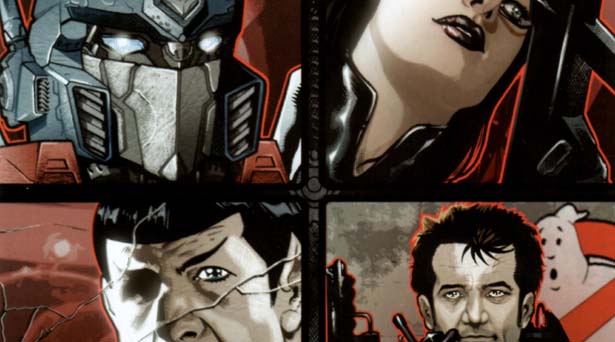 Infestation is an ongoing comic book series published by IDW Publishing that connects a large bunch of the company’s licensed properties together in one weird and not-so-wonderful world.

First published in 2011, the initial series saw the same violent zombie strain taking a tight and horrific hold of the likes of the G.I. Joe, Star Trek, Transformers and Ghostbusters universes, but there have been others.

Later editions of the series saw the introduction of the characters from the likes of the Dungeons & Dragons: Eberron and Teenage Mutant Ninja Turtles universes. It’s a very unique concept and, given that it’s still going nearly five years after its initial publication, it’s obvious that it’s going down pretty well with fans too. 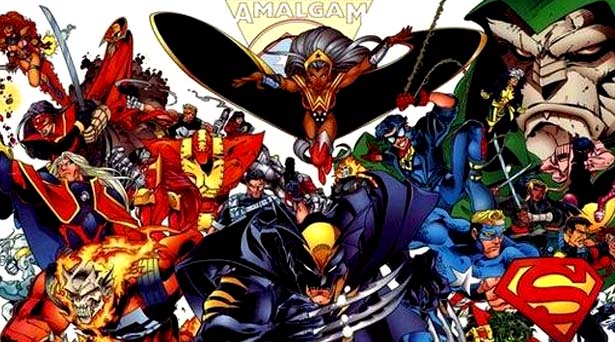 Crossovers between Marvel Comics and DC Comics aren’t exactly a rare thing. Most of the two company’s main characters have met each other at some point, so nobody should be surprised that they exist, but this was different.

Amalgam Comics was a publishing imprint shared by the two company’s and ran for twenty-four issues starting in 1996. Half of them were published by each company, but all the stories took place in the same universe.

That universe was a bizarre mix of the two companies’ main continuities. The Spectre and the Living Tribunal merged the universes and the characters within it, so the likes of Professor X, Doctor Strange and Doctor Fate became Doctor StrangeFate, Superboy and Spider-Man became Spider-Boy, Doctor Doom and Doomsday became Doctor Doomsday, Batman and Wolverine became Dark Claw, and Thanos and Darkseid became Thanoseid. It was a lot of fun, but rather pointless!

What do you think? Are these crossovers weird? Can you think of any even weirder examples from comic book history? Have your say below!