The History of the Infinity Stones 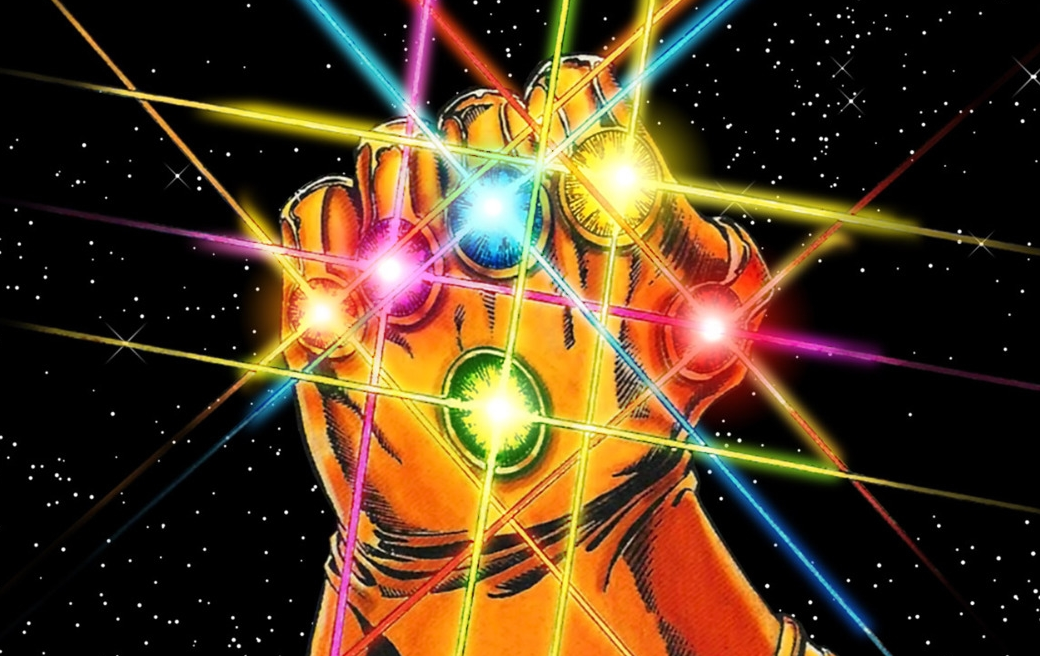 I can’t figure out why, but everyone seems to be interested in the Infinity Gems right about now.

All kidding aside, the rock candies that hold ultimate power were critically important to the Marvel Universe decades before the movies started messing around with them. They have a long, complicated history that wound its way through some weird places. The friggin' Justice League are going to show up at some point in this history, that's how weird it gets. 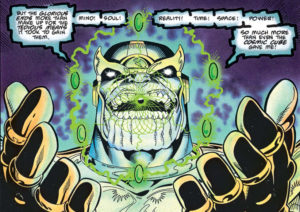 Chapter One: The Soul Gems

It all starts with a dude named Adam Warlock, who was originally known as Him. And embedded in his forehead was a little thing called the Soul Gem.

But it wasn't the only Soul Gem. No, there were  five others. And Thanos decided he wanted to gather them all and destroy the stars. It took time for Thanos' motivation to develop…Anyway, the Avengers, Adam Warlock, and Captain Marvel (the Mar-Vell one, not the superior Carol Danvers one) punched him a whole lot until he stopped.

And the Avengers dusted off their hands and thought, "Man, those Soul Gems will never, ever be a problem ever again. Time to go back to our mansion with our butler." And what do you know, they were right! The Soul Gems would never appear agai"”okay, that's obviously a joke.

Marvel cosmic items straight-up never stop coming back. I think the Ultimate Nullifier has more on-panel appearances than some of the X-Men. 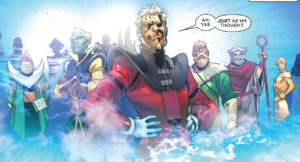 Chapter Two: The Elders of the Universe

Eventually, the Elders of the Universe gathered the Gems.

Their original purpose in doing so was to murder Galactus, but a lotta people prevented that from happening. After that, each Elder was allowed to keep one Gem.

The Soul Gem went to The In-Betweener, who balanced order and chaos and owned the worst name in comics. The Power Gem was given to The Champion, who just used it as a super unfair advantage as he fought everybody in sight. The Gardener – who’s only memorable for his boring-ness – got the Time Gem. As in the movie, The Collector took Reality. Space was bestowed upon The Runner, who's just cosmically fast and who once held a marathon for the fastest people in the Marvel Universe. The Flash, who ran so hard in Crisis that he switched universes, won.

Finally, the Mind Gem was given to The Grandmaster, as played by Jeff Goldblum. I mean, Goldblum’s done other things, but we're all gonna remember him as The Grandmaster forever, and we all know it. 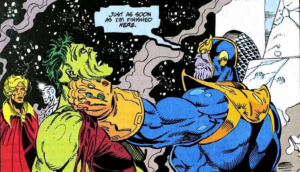 Okay, this is where all of you probably came in.

At this point, the Soul Gems had been officially re-dubbed Infinity Gems, and Thanos wanted those suckers for his sweet glove. That’s right, we’re just now getting to the Infinity Gauntlet. In the series titled (checks notes) Infinity Gauntlet, Thanos grabbed all the Gems off-panel before Issue One even began. Then he hung out with the Devil (or one of them, anyway), and wiped out half of all life in the universe with a mere snap of his fingers.

Yeah, that's Issue One, Scene One. Thanos did the finger-snap thing because he’s in love with Death. No, really, the Grim Reaper is a lady in the Marvel Universe, and Thanos wants to bone her. Pun definitely intended. So the heroes of the Marvel Universe went after Thanos, who pretty much wiped the floor with them, until eventually Thanos said, "Hey, Death, do you love me now?" At this point, Death is like, "I don't like you; please stop talking to me."

That's right, Thanos, women don't owe you a relationship just because you’re nice to them.

At that point, the biggest Nice Guy in the cosmos pretty much gave up, and the Gauntlet was transferred to"¦ 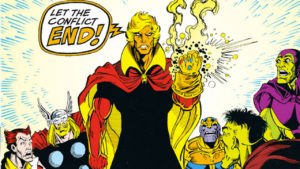 That's right, this guy again. He sure does pop up a lot.

He got the bedazzled glove of cosmic power, although the Living Tribunal really didn't want him to have it. Eventually, Warlock agreed to split up the Gems among some friends (we'll get to that in the next entry). After that, Magus – an evil Adam Warlock from an alternate future, because comic books – assembled the Gauntlet.

Magus used the Gauntlet to create evil duplicates of several of earth's heroes, with the intent of having them invade the planet. If you've read Maximum Carnage, that weird, evil Spider-Man with four arms came from this story. The event was known as the Infinity War. At the end, Warlock revealed that the Reality Gem on the Gauntlet was fake, and he’d been trapped inside the Soul Gem.

And then some weird s**t happened. 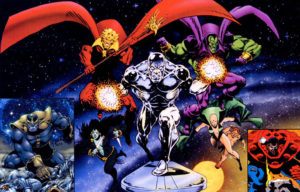 In the previous entry, I mentioned that Warlock divided the Gems among some pals. Those pals were collectively known as The Infinity Watch.

The Power Gem was given to Drax the Destroyer, and you can only imagine how strong he became after got that. The Space Gem went to Pip the Troll, who was a troll and also Adam Warlock’s friend. Look, just roll with it.

Naturally, Adam Warlock kept the Soul Gem. Reality was given to Thanos, who – Wait, Thanos?! Really? Jesus, Warlock, you were one bad judge of character.

Gamora wound up with Time, which went to time-traveling freedom fighter Maxam once Gamora called it quits. Finally, the Mind Gem went to Moondragon, but with some severe restrictions.

Moondragon would later become an actual dragon and fight monsters with her girlfriend, because comic books are metal as hell. But that happened much later. 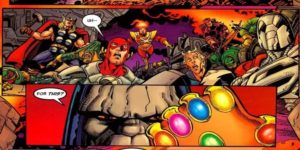 Yeah, so remember when I said that the Justice League would be in this? At one point, The Grandmaster (Jeff Goldblum, as you remember) and Krona (big blue DC villain) settled on a bet: They would pit the greatest heroes from their respective worlds against each other in a contest.

So they sent the Avengers and the Justice League on a little scavenger hunt. Each team was given a list of the most powerful items in both realities and was tasked with collecting as many of them as they could. From the DC Universe, they had to find the Wheel, Jar, and Bell (which were possessed by demons); the Medusa Mask (which manipulated emotions); the Orb of Ra (which turned you into an element monster); the Spear of Destiny (used to stab Jesus, so it's magic); the Eternity Book (also magic); the Power Battery (the Green Lantern lantern); and…that's about it.

The Marvel Universe list included the Ultimate Nullifier, the Wand of Watoomb, the Evil Eye, the Cask of Ancient Winters, and – you guessed it – the Infinity Gems. Darkseid wound up with the Gauntlet, and threatened all of reality"¦that is, until it turned out that the Gauntlet didn't actually work in the DC universe. Then he took it off and threw it at the Justice League. The two teams eventually fought, but then they teamed up and saved all of reality. And the gems went away for a while. 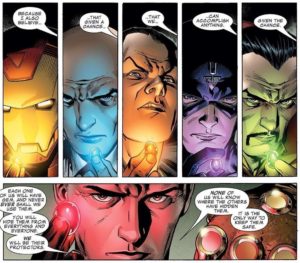 Anyway, the Gems bounced around the universe for a long time. Specifically, the Power Gem wound up back with The Champion, and then with Titania, and then She-Hulk beat up Titania and took it. She gave it to Mr. Fantastic for safekeeping. He then assembled his secret friends the Illuminati, and they gathered the Gems one more time.

Iron Man got the Reality Gem; Professor Xavier of the X-Men got the Mind Gem (which just seems unfair); and Namor the Sub-Mariner got the Time Gem (because they had to give him something; why is he even there?). Black Bolt, king of the Inhumans, got the Space Gem, and Doctor Strange was given the Soul Gem (because, I dunno, magic or whatever).

They secretly hoarded the gems for some time, even though virtually everyone I just mentioned died at some point. One of them was even revealed to be a secret Skrull.

I love writing long comic book histories like this, because I get to write INSANE sentences like that last one, and then totally move on. Speaking of which"¦ 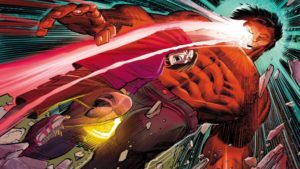 I figure I should actually explain who The Hood was, rather than just launch into the story.

The Hood was a dude named Parker Robbins. He debuted in an adults-only Marvel MAX series that was basically a dark parody of classic Marvel Origin stories. I mean, the dude's name was Parker for a reason.

Parker was a scumbag who lucked his way into taking possession of two magic items: a pair of shoes that let him walk on air, and a hooded cloak that turned him invisible when he held his breath. But being ruthless, Parker turned this into an opportunity to assume the role of the new Kingpin of crime. He also tried to become Sorcerer Supreme. Got pretty close, too.

But shortly after the Avengers reformed, and some time after Parker himself lost a sweet gig as counsel to Norman Osborn, The Hood had a new idea. He decided to go put together the Infinity Gauntlet and conquer the earth. But he only got three of them before the Avengers stopped him. 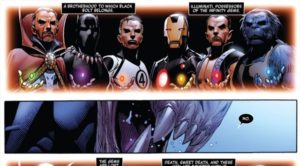 After that, the Gems went right back to the Illuminati.

But this time, the group’s makeup was different. The Power Gem went to Namor, because again, he needed something. Mr. Fantastic claimed the Reality Gem, presumably so he could monkey around with the fabric of the universe. Professor Xavier got the Mind Gem again (when he died, it went to The Beast). Iron Man grabbed that Space Gem. Dr. Strange was again given the Soul Gem.

And finally, Captain America took Black Bolt’s place as the keeper of the Time Gem, because they felt like being cute. Around the same time, the Incursions started, and the team, plus Black Panther, stepped in to stop them. As a squad, they put the Gauntlet back together, and Captain America wielded it.

They stopped a single Incursion, but all the gems – except for Time – shattered in the aftermath. Oops.

Well, guess we've seen the last of those…What do you mean, we have to tie into a movie? 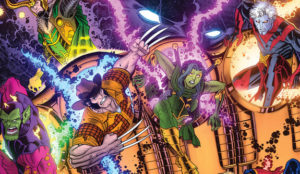 And welcome to the present day, when the event known as Infinity Countdown was still in process! Essentially, the Infinity Gems, which are now called the Infinity Stones, started to come back into existence in new forms.

And in new colors to match those movies everyone likes so much. The Collector and The Grandmaster teamed up with the Guardians of the Galaxy to find and capture all the Infinity Stones. But Magus was back, and he wanted it. Hank Pym – who had become half-Ultron – wanted it, too. Look, if I explained every one of these things we'd be here all year.

Maybe I'll do a History of Hank Pym next time. Although I'll probably do Cable first. Anyway! Infinity Countdown is still in progress, so I can't exactly say a ton about it. But Wolverine has an Infinity Stone, so that's neat.

And that's the history of the Soul/Infinity Gems/Stones! You now know exactly enough to have to forget all of it and just remember the movies. It's much simpler that way. 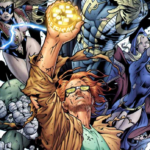 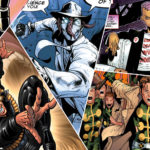