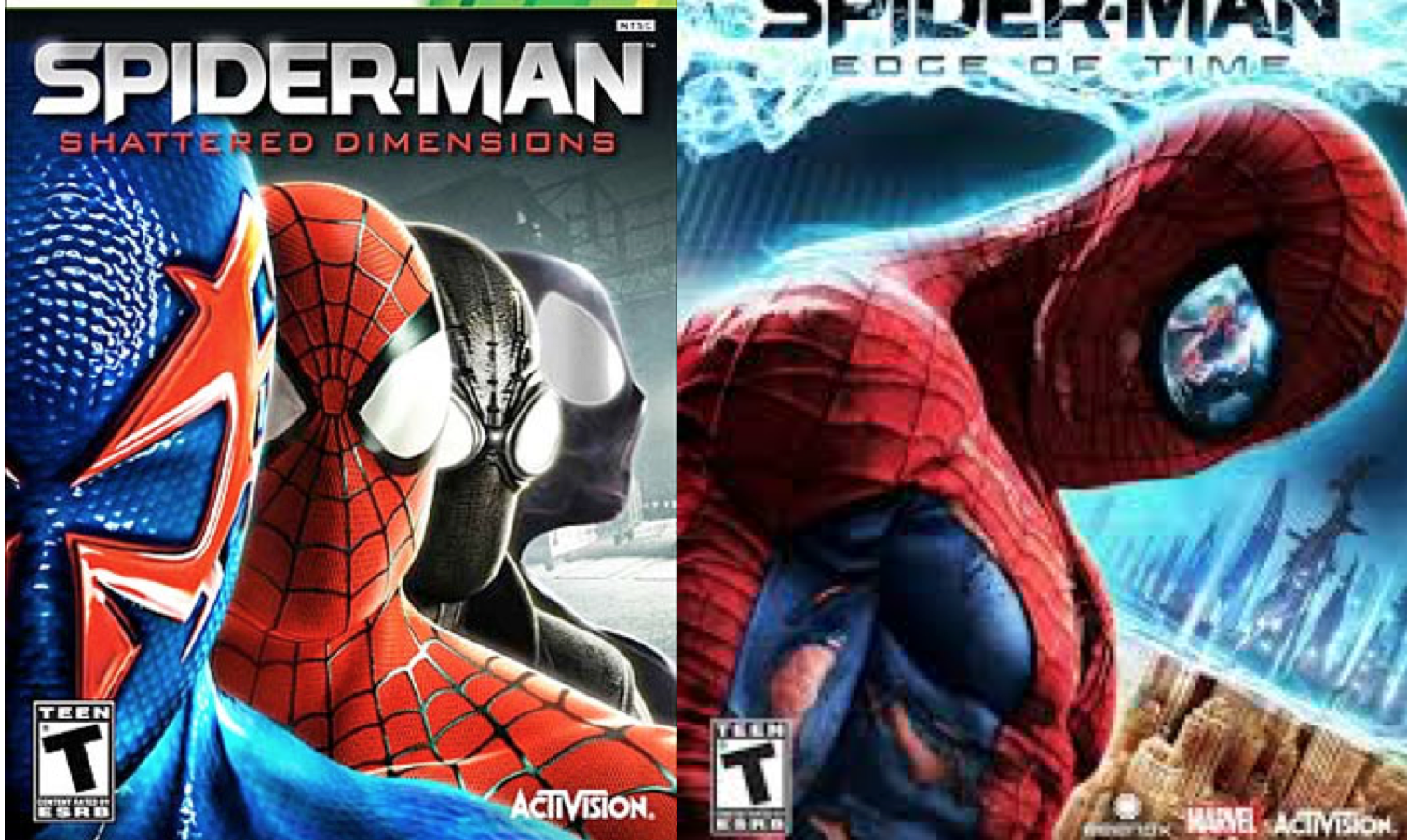 Hello folks and welcome back to my little look at the recent history of great Spider-Man games. YOU CAN READ PART ONE HERE, where I established the premise and looked at the first two games I wanted to cover. Ultimate Spider-Man is an all time classic and Spider-Man: Web of Shadows was a stumbling follow up with a misguided premise.

Today, we're checking out the first two games produced by Beenox, which are actually two of a pair! One is a sequel to the other. A stripped back, disappointing, studio damaging sequel. We'll get to that. These games are built off of the extended universe of alternate Spider-Man stories. Both games feature our classic web slinger as well as the far off future Spidey of 2099, Miguel O'Hara. Shattered Dimensions mixes in two additional Spiders-Man, the grim dark Spider-Man Noir, and our old friend Ultimate Spider-Man. Other than that though, they're pretty different. Not just in terms of quality, but in terms of characters, and even structure. 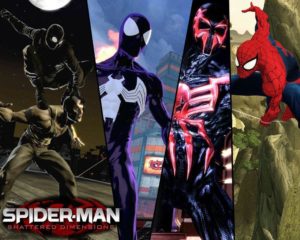 In Shattered Dimensions, Spider-Man manages to stop Mysterio from stealing an all powerful tablet, but the fight results in it shattering across four alternate earths.

So Madame Web draws four Spider-Men together to recover the pieces from twelve supervillains who've each stolen a piece, granting them new powers. The Spider-Men recover the majority of the tablet and then team up to do battle against Mysterio in a dimension spanning fight to the finish.

As a plot, it's mostly an excuse to loosely connect a smattering of different fights in a variety of locations.  Each Spider-Man has a loose plot arc as well kinda. Spider-Man Noir is tracking a criminal enterprise that leads back to Norman Osborn, Spider-Man 2099 is delving into the evil being done by Alchemax, Ultimate Spidey is trying to figure out the new Venom symbiote bonded to him, and Amazing Spider-Man is"¦ uh"¦ I guess just trying to catch Mysterio. Look, again it's an excuse to do story stuff. We should all be aware of this already. 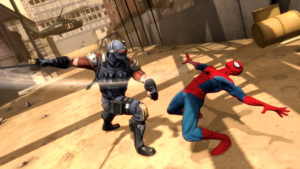 So this game is structured very differently from most other Spider-Man games. There's no hub world and swinging around the city isn't really a factor. Web swinging is actually pretty uncommon as an activity other than in certain levels. And that's going to turn off a lot of people. But, uh, I think it's kind of still really fun.

The lack of a hub world is maybe the best decision this game made. Because it means each level can take place in a completely different location. From the oil rig reality show of the Ultimate Deadpool level, to the grim carnival of Goblin Noir, to the neon cityscape of 2099 and the old west ghost town where classic Sandman makes his home. Each Spidey also has some unique gameplay gimmicks.

Amazing Spider-Man uses more web combat and swings around a lot, 2099 slows time and falls through the miles high skyways that line Nueva York, Ultimate Spidey gets his Venom Rage, and Noir"¦ rips of Arkham Asylum. Okay I know literally everyone has pointed out that similarity, but later Spider-Man games would take much better inspiration from the Batman series.

Also, I wanted to say that the use of thumbsticks for boxing segments was really fun and I wish it had stuck around. 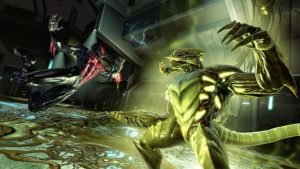 The structure of this one allows for maybe the best and most thorough collection of Spider-Man villains to date.

In order, we got: Kraven, Hammerhead, Hobgoblin, Electro, Sandman, Vulture, Scorpion, Deadpool, Juggernaut, Green Goblin, Doctor Octopus, Carnage, and Mysterio. Admittedly, three quarters of those aren't the versions you are most familiar with, either because they're comics-accurate alternate universe depictions or because they were created for the game but they're all true to the spirit of the original characters. Also, you read correctly, they did use Deadpool as a villain here.

His Ultimate incarnation, but still. Each villain is even more fun, however, because the game's style allows for the entire stage to be built around the central character. It really feels like a classic single issue of comics for each level. The Spider-Men are pretty dead on too.

For the voice cast, the developers recruited various classic Spider-Man voice actors from across multiple animated depictions of the character and the result is something special. 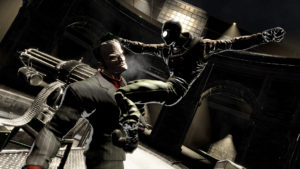 There aren't many things to place here. I'll be honest, I think this game is pretty wonderful. But there are some flaws.

The Spider-Man Noir stages are probably the weakest. Despite having some very good atmosphere, they inevitably suffer from being compared to the much deeper and more fun Arkham series. The only one of his three levels that stands out is the Goblin one, and that's due to the fun carnival environment.

As well, while the 2099 levels are fun, they blend together the most and have the weakest bosses with the least characterization. They look really cool but have no real personality. It's a shame too, when there were better Spider-Man 2099 villains they could have utilized.

Also, it is a pretty short game. The levels aren't too long and they also sometimes suffer from being repetitive. The enemy types are all just reskins of each other which does lead to the gameplay leading up to the boss battles getting occasionally boring. 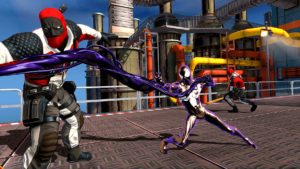 Um, I think this is my favorite Spider-Man game. Well okay, not really (probably). It's not the best. But it's the most consistently good.

And its good because it ditched the conventional wisdom of what made a good Spider-Man game. Swinging around the city rules but it means the whole game has to take place"¦ in the city.

Abandoning that allowed for varied and different locales built around the actual villains. And way more villains too! This thing has almost double the amount of Spidey villains of most games. It's really fun. I do wish the various Spider-Men had interacted more but this is the game I'll pop in and replay the most.

I could play it right now. And the ability to level select makes it even better. No powering through the parts you don't like, just right to the dopamine. It's fun, unique and a great time. Now on to the disappointment. 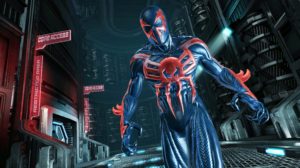 5. Spider-Man Edge of Time: The Story

Some time after the events of Shattered Dimensions, the head of Alchemax in 2099 decides to use time travel to pre-establish his corporation in the present day, which is where our regular Spider-Man is living and there is already a problem.

The last game pretty clearly established Spider-Man 2099 as another dimension, not the canonical future of the normal Marvel Universe. And this game seems hellbent on undoing that. And so our two Spider-Men must communicate across time to defeat Alchemax Scientist Walker Sloan, Anti-Venom, and Doctor Octopus.

And that's it. We'll get to that. The plot is super convoluted and boring. In stark contrast with the first game, which was elegantly simplistic and fun to play through.

This one is just a long slog with nothing to build off of.

4. Spider-Man Edge of Time: The Gameplay

I mean, it's all the stuff that was there in Shattered Dimensions but here it doesn't work.

Shattered Dimensions sacrificed the hub world web swinging to have a variety of vastly different locations but here the whole thing takes place in two time periods of the same office building. So it doesn't work here. Also the "gimmick" is straight up nonexistent.

The game was marketed with a singular idea: you could do things in one time period to affect the other. But in practice that doesn't really happen. There are a handful of puzzles that necessitate doing something small in the past. But they're all mandatory. It's not like the subtle things you do make changes. Like, imagine if, say, beating up more guards in the past led to reinforced guard patrols in the future? Or maybe using certain stealth-based routes to infiltrate areas a lot could lead to those routes being blocked up in the future?

There are a lot of things that could have been done with this gimmick that weren't, is what I'm saying. 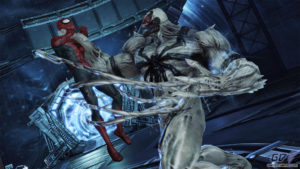 3. Spider-Man Edge of Time: The Characters

Remember how there were just a plethora of villains and characters all over Shattered Dimensions? Yeah, that is not the case here.

There are like three to five villains in the whole game. And they are all either bad or overused. There is far too much Doc Ock in my Spider-Man games. And holy crap has anyone EVER cared about Anti-Venom? Even once? I've read the entire Anti-Venom miniseries and I can barely muster up a shrug for the character.

Oh and the final boss is just the two of them mish-mashed together into a slurry. It's called Atrocity. And it is a borefest of a final boss.

This game is boring overall as a rule. If you want to know how something about this game is, the answer is boring. And the character list is absolutely no exception. Jesus Christ, Anti-Venom. What, was Big Wheel too interesting? 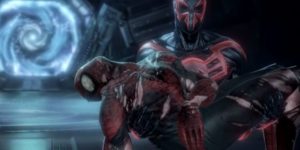 2. Spider-Man Edge of Time: The Flaws

I didn't get around to this game until years after it came out because it was so clearly a disappointment. The only reason this isn't way more known and reviled is because it came out on the same day as X-Men: Destiny. It just keeps all the flaws of Shattered Dimensions but omits all of that game's strengths.

The result is supremely forgettable. I played through every second of this game and I'm struggling to remember really anything about it. And I'm sad about that because another game like Shattered Dimensions would've been a breath of fresh air.

It feels like Beenox had one huge budget to spend across both of their games and they spent 98% of it on Shattered Dimensions and then remembered they had a whole other game to make.

I don't really know what else to say about this game. It's a black hole of interesting.

I'm specifically dreading trying to find images for this half of the article. Like, what is above this entry right now? is it even a picture of the game? Because at a certain point I'll just have to start slapping up pictures of pugs dressed as Spider-Man because I will run out of screenshots of the game that exist on the internet.

What I think we've learned is that building a Spider-Man game around a gimmick other than "be Spider-Man" results in a bad game. Shattered Dimensions is the exception, but only kind of because that game's gimmick was "be multiple Spider-Mans".

And that's it for this time, next time is our penultimate chapter where we will discuss the two games based on the Amazing Spider-Man movies. Two movies you can see me review on this very site in an article I posted today. SYNERGY. 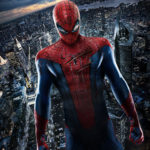 Every Comic Book Movie Ever, Reviewed: Part 2
Next Post 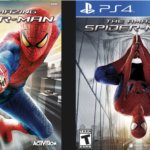