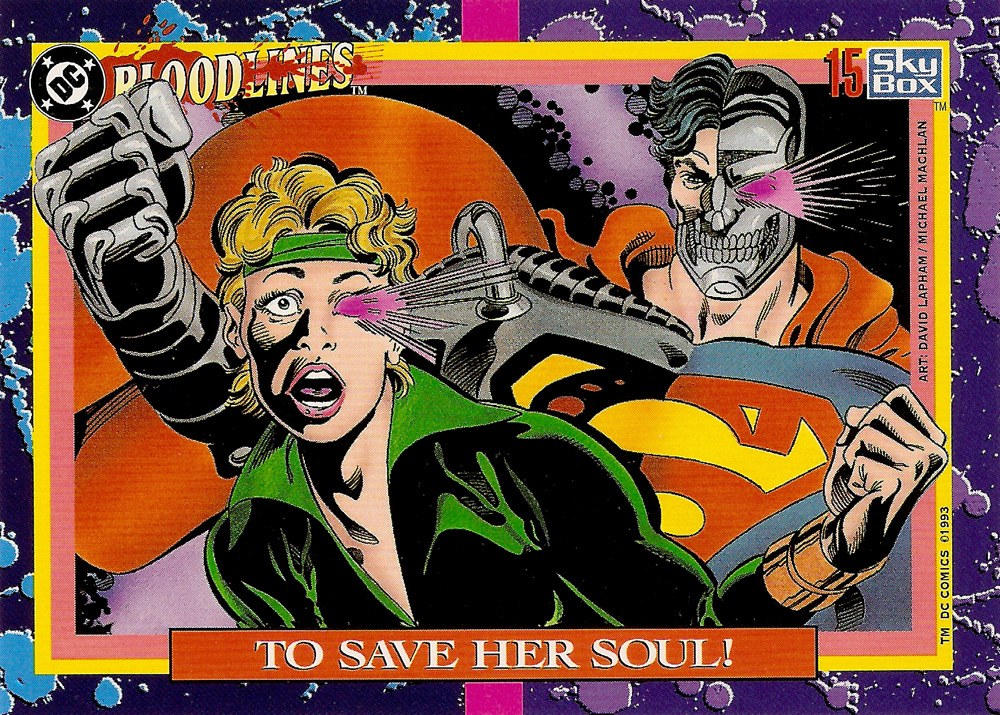 Oh, the mid to late nineteen nineties, such a horrible time period for character creation. And nothing is a better example of this than DC Comics' 1993 story line, Bloodlines. The event, which ran through the annuals of every DC comic, followed the invasion of earth by alien parasites. In each annual, a parasite accidentally activated a metahuman, generating a brand new superhero or supervillain. Out of 24 new characters, only three even marginally memorable ones were created: One good (Hitman, star of one of DC's most underrated and best series), one fine (Anima, who did some Teen Titans stuff, until Prometheus murdered her) and one terrible (the number one entry on this list). So let's take a look at some of the most forgettable characters in comic book history. Welcome to Bloodlines. 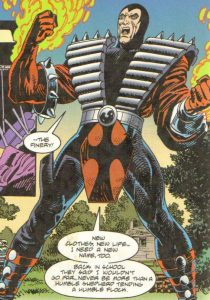 I'll be fully honest here. I don’t understand how this character didn't catch on.

His outfit isn't THAT much worse than those of other Batman villains of the time, his gimmick is memorable, and his name is phenomenal. Like, I would rather have seen more Cardinal Sin stories. Friggin’ Amygdala got to stick around; why couldn't he?

Perry Dennison was a Gotham City priest, until one of the Bloodlines Parasites attacked him and changed him forever. Perry gained the ability to cause decay and death with his hands. He found that these powers granted him a unique capability to do evil, and decided to give that a shot. Finding that he loved evil quite a bit, Perry took the name Cardinal Sin and decided to go murder his Bishop, Bishop Maxwell. That's my kinda dude. "Hmm, these powers would be good for a supervillain, so I guess that's what I gotta be now."

Maybe it was God's plan. 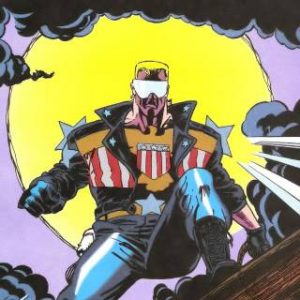 America! Hell ye – okay, maybe right now isn't the time or place for that sort of sentiment. But hey, Joe Public has a super patriotic design for no good reason and, since he came about during the Clinton Administration, I'm totally okay with that.

Joe had a steady job as a Gotham City gym teacher, which should have led him down a path as supervillain Captain Dodgeball. But before he had time to build himself a gun powered by crunches or whatever, his world was shaken to its core by the death of a beloved student. The student died from a bad batch of Ecstasy, and this drove Joe to go avenge him.

He tried to take care of business, but since he was, y'know, a gym teacher, he found himself unable to deal with drug lord "Happy Jack" until Batman stepped in.

On his way out, he was attacked and spine sucked by space parasite Gemir. He gained the power to draw strength from those around him, meaning that he was literally incapable of solving problems by himself. 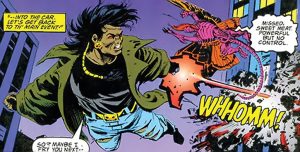 Welp, here we go, let's talk about yet another character with a troubling name and concept. Josh Xan was an edgy teenager (I am so sick of typing out that sentence, and it’s only gonna get worse), whose entire characterization was that he was a jerk.

The victim of targeted harassment due to his half-Vietnamese heritage, Josh was attacked by a bloodlines parasite who gave him the super power of channeling his negative emotions into dark force energy. He used this power to help Hawkman, because Hawkman needs all the help he can get.

Josh settled on the nickname Mongrel, which seems misplaced. Like, I get the whole "take a horrible nickname you were given as a kid and reclaim it as your superhero name" thing. Daredevil did that. But "Daredevil" is a cool name. "Mongrel" is not.

He took his name and powers into the field for a long time as a member of the Blood Pack, until Superboy Prime vaporized him with heat vision.

Jack Mobley was the poster boy for jerks who didn't get that they were jerks.

He was a computer programmer who lost his job because he couldn't work well with others. Because of this, his career stalled, and his wife left him and took his daughter. And then he got cancer.  While dealing with this serious bout of bad luck, he was ambushed by two bloodlines parasites, Lissik and Venev. The two of them sucked out Jack's spinal fluid like they were Archie Andrews and Betty Cooper drinking milkshakes.

Jack awoke with a horrific appearance, looking like a monstrosity. He also found that anyone he touched would turn into a hideous monster. This made him into the perfect combination of John Carpenter and King Midas. He sought out his ex-wife and murdered her new husband in order to win her back. This seems like a bad plan.

When it predictably failed, he just turned his ex into a monster and shrugged it off. Like you do. 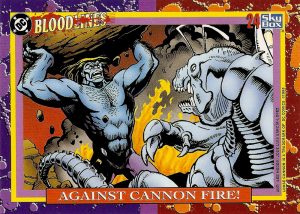 He don't play by your big city rules! He's a loose cannon! A maverick! A roughneck son of a gun! He's not afraid to get down and dirty in the mud with the big dogs! Okay, that's enough clichÃ©s for now.

Edward "Eddie" Walker was a metropolis Special Crimes Unit detective, but he was nicknamed "Loose Cannon" by the world's least creative police department, due to his reckless behavior and general jerkishness. Unfortunately, said behavior got him involved in a horrible car accident that crippled him.

The great Maggie Sawyer gave him a new post in the terrifying community of Suicide Slums, which I sure hope is a colloquial name and not an official one. He was attacked and had his spine drunk by space parasite Lissik, who was responsible for like a third of this list being activated. Lissik has really bad taste in"¦uh"¦who he tastes?

Powers-wise, Loose Cannon is the Hulk, but he changes colors based on his emotional state. Like a weaponized mood ring. 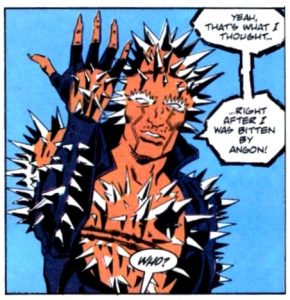 Imagine if Wolverine was an angsty dude with a worse sense of visual design. Now you have Edge.

Edge was a dude named Tom O'Brien. He worked in Metropolis as an upstanding pillar of the community, when a space alien parasite named Angon tried to drink his spinal fluid. His latent super powers became active, and he grew horrible, sharp metal blades that poked out from his body. So, when he woke up in a pile of bodies, he logically assumed he had murdered all of them.

He immediately became a target of the Metropolis Special Crimes Unit, until Steel helped him clear his name (turns out that the bodies he woke up amidst were actually other victims of Angon, who hadn't survived). Edge had a sprinkling of other appearances, but disappeared shortly afterwards. Now I will go about making fun of his name.

Edge sounds like a parody of a nineties comics character. Like, if a thirteen-year-old was allowed to name a superhero, this is what we would've gotten. 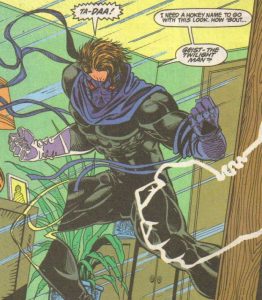 Congratulations, Reader! No matter what your name is, you don't have the dumbest name ever generated! Because it belongs to Geist, aka Dwayne Geyer.

Most of the time, he's just sorta translucent. He's like the human equivalent of those glasses that turn into sunglasses in sunlight, and regular glasses inside, but they don’t really work, because they never aren't sunglasses, and you just wind up walking around all day with vaguely tinted glasses like a creep.

That analogy is the high point of my writing career. Honestly. 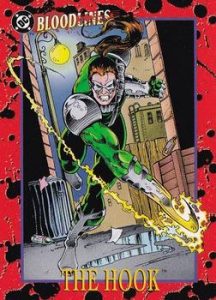 Ever since Green Lantern/Green Arrow, Oliver Queen has always been seen as an inherently political character. So is it any surprise that it was his Bloodlines crossover that gave us Hook?

Kieron Masterson was a blind Vietnam War veteran who lost an arm in the conflict. Presumably, he went blind after getting out of the army, although if that wasn't the case it would explain how he lost the arm. Kieron wound up living on the streets in Seattle, where he was attacked by an alien parasite.

This gave him the power to see people's "auras", a power you'll recognize from that weird girl you went on one date with in college, during which she exclusively talked about kale and crystals.

This power stands in sharp contrast to his weaknesses, which are (as listed by the DC Database) Blindness, Post Traumatic Stress Disorder, and Missing Limb. Those, uh, those seem like steep obstacles to overcome to be a superhero. 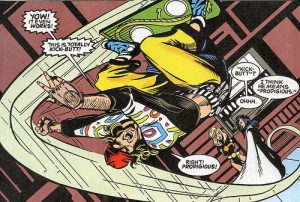 Jamm was a normal skater dude, going about his loser-y ways on earth in the 20th century, until he was attacked by Angon, a parasite who also activated Edge. So it seems he has a taste for dudes who shop at Spencer's Gifts, despite not being thirteen.

So Jamm gained superpowers. The power of"¦MIND CONTROL!!!!! He then bumbled into Legion of Superheroes member Timber Wolf, and accidentally got warped into the far future of the 30th century. There, he used his powers to force the Legion to give him a tour of the future. He also used his powers to make women interested in him, which would be sexual assault verging on rape if he went any further with it. Great.

So the creepy little s**t manipulated the Legion of Superheroes until he almost got everyone killed, at which point he released them from his control. They fixed the situation, called him out on being a creep, and abandoned him back in his own time, with the threat that they would come back if he ever did anything like that again. Good. Weirdo. 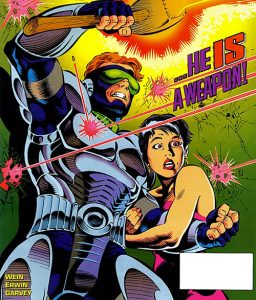 Ladies and gentlemen, the most nineties character ever created. There is not a more perfect idea for a character than this ridiculous pile of insanity.

Andrew Van Horn was the son of a military industrial manufacturer who wanted to encourage his dad to take on a more environmental stance. Unfortunately, he was attacked by an alien parasite that drained his spine and activated his latent super powers. His power is that he can turn any item into a gun by touching it. Or a grenade. So yes, he can shoot you with a back massager. Or a lamp. Or a stick.  This is hilarious. Thank God he can control it, or he'd never be able to go to the bathroom again.

The dude fought Deathstroke and lived, so that's something. He also survived a battle with Prometheus, although that one ended with Prometheus slicing his hands off. Soooooooooooo"¦probs not gonna be a hero anymore.

His gear spent centuries bouncing around, until the 853rd century, where it found its way into the hands of some random dude. He became Gunfire 1,000,000. Until he ran into a time-displaced Tommy Monaghan, aka Hitman, aka the only good Bloodlines character. Tommy beat him so bad, the new Gunfire accidentally managed to use his powers on himself, turning his own ass into a hand grenade. He then promptly exploded and died. A fitting end to a really stupid idea for a character.

And there you go, ten really weird and bad characters that no one ever remembered again. Look, honestly, just go read Hitman. It's a lot better than any of these. By SO MUCH. In conclusion, Hitman is great, the rest of these guys also exist.