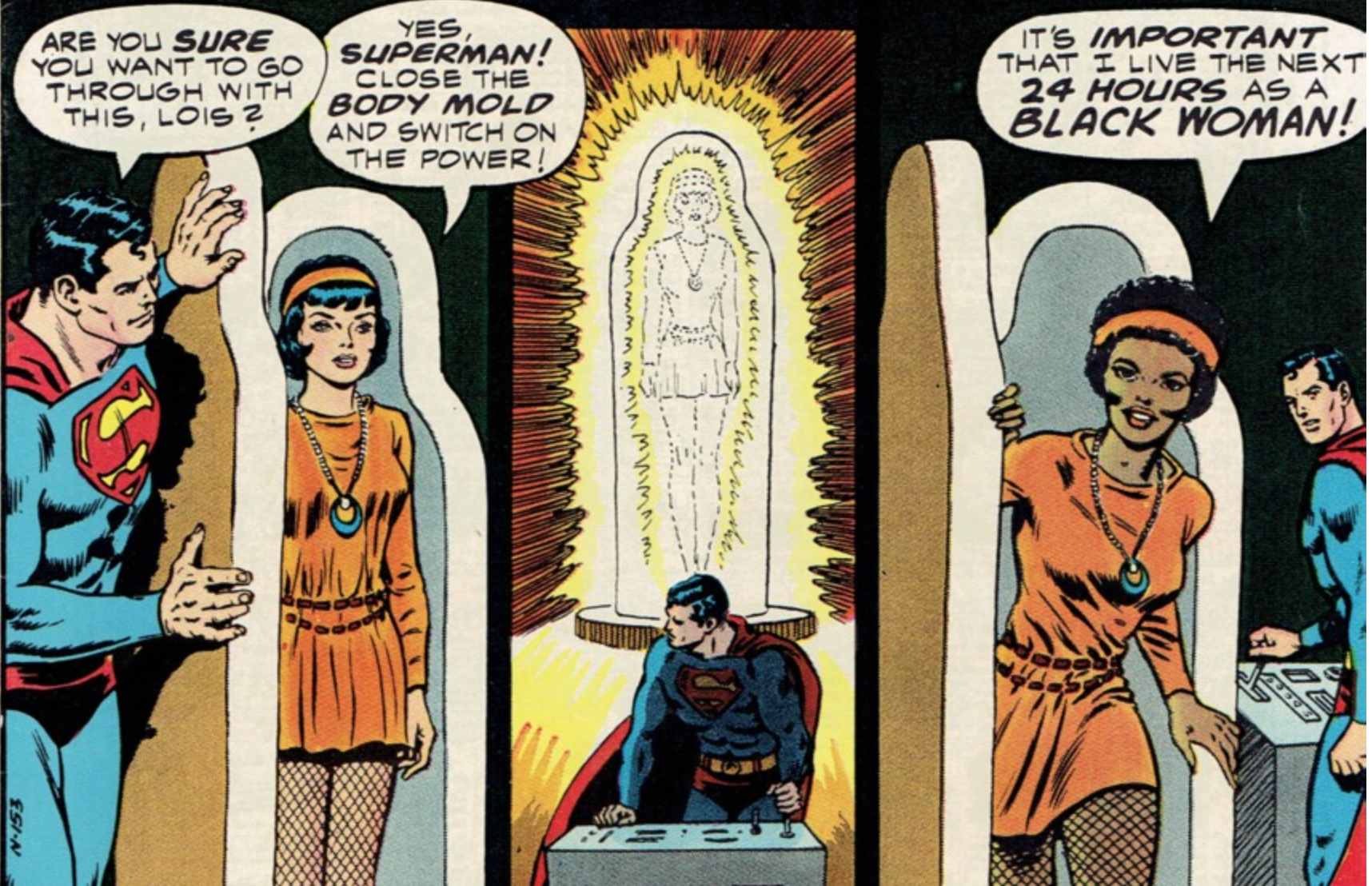 One thing about the comics blogger internet is that we all have the same beloved punchlines. But a lot of those punchlines are obscure BS comic books that most people haven't read. So I wanted to go about giving you some context for this stuff.

SOME STUFF RIGHT UP FRONT: This story is famous for being a good-intentioned but horribly executed story about the problems black Americans faced in the seventies. As a white guy who grew up much later than that, there are problems with this story that I couldn't adequately express. For an analysis of the flaws in its racial commentary, I'd encourage you to look to commentary from black writers. But making fun of a racially insensitive comic book? That, I’m qualified for. 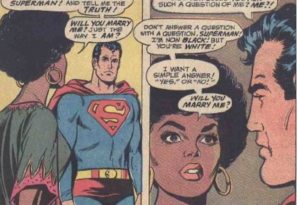 1. Well, That Sure is a First Page

This thing opens like a gunshot to the face.

Black Lois Lane accosts Superman to ask if he'll still marry her now that she's black. No context, no information about what in the hell is going on, just this super serious splash page asking if Superman is a racist.

I'll say this: It’s pretty ballsy. It's funny because it mirrors many comics of the time. Hit ’em with a crazy in medias res splash page to tease the upcoming story. The only problem here is that the story is bats**t insane and pretty racist, so getting smacked in the face with it on page one is hilariously shocking.

We’ll get back to this scene when it happens in the story because it’s even funnier there, but it’s already pretty insane. This story is only fourteen pages! I don't know how it has the time to be that deeply insane.

But here we go. Let's get started. 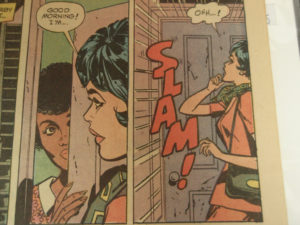 2. Oh, Jesus, this Whole Thing is Going to Be About that “Reverse Racism” BS, Isn’t It?

Lois has been assigned to cover one of Metropolis' poorer neighborhoods, which is known as…oh, jesus…Little Africa. Um, traditionally, similar neighborhoods are named after COUNTRIES. Africa, in case our public school system failed you, is not a country. We are in Panel One, and there’s already a problem. Lois also mentions that she's going to win a Pulitzer for covering this story.

Oh, boy, using black people as fodder for your awards-bait journalism. How wonderful, Lois. And why does she think she's going to win a Pulitzer? What is her story? Extree! Extree! Black People are victimized by systems of abuse ingrained in our culture since slavery. Read all about it! That is not news. That was not news in the seventies. We all already knew that.

So Lois leaves, and Clark figures that he might need to keep an eye on her as Superman. This fear is spurred on only by the information that Lois is going to a place where there are black people.

The answer to that first page's question Is Superman racist? is Yes. Yes he is. 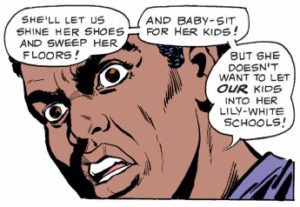 When Lois gets to"¦*sigh*"¦Little Africa, she finds that everyone she approaches ignores her. Every black person just silently walks away. They don’t want to talk to Lois. One of those people is literally a baby, but no one ever explains why Lois tries to interview a four-month-old.

Even a blind woman bails upon hearing Lois' voice. Although Lois assumes this is because she has a white sounding voice, rather than because she was annoying the hell out of this random lady. Next, we meet Dave Stevens, a black activist who makes some of the only valid points about race in the entire comic book., as he presents a lecture to a group of teens.

Dave lectures a group of teens about the evils of pseudo-progressivism, which refers to people who are fine with black rights in theory, but fight against them in practice. It’s the I'm against segregation, but I don't want them in MY school attitude that you still see today. It's weird to see a point like this being made. It may be simplistic, but it’s fairly on point in this comic that otherwise completely misunderstands the issues it’s discussing.

That’s why I usually put this one more in the camp of It's totally awful, but its heart wants to be in the right place than anything else.

4. Superman is Weirdly Down with All This

However, that doesn't protect the story from its eye-rolling portrayal of the issues.

By its own hand, the story’s about how black people treat Lois unfairly because she's white. If you're going to do a story on racism, your message probably shouldn't be Man, black people sure are needlessly mean to white people. Just sayin'.

But now we get to the real plot. Superman shows up because"¦I dunno, you tell me. But he shows up, and Lois says she needs his help with her story. She intends to make herself look like a black woman by using a big Kryptonian machine called the Plastimold. The effect will wear off after 24 hours, however.

What's weirdest to me is that Superman asks very few questions. Lois is like, "I wanna be black today." And Superman just goes, "Okay, then, Lois. Have fun, babe! Just let me know in advance if you want to be Asian on Friday or whatever, because the machine needs some recalibrating for that." 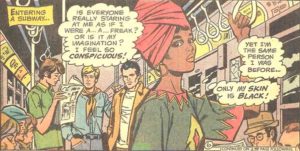 And in a flash, Lois is back in Little Africa, ready to try again.

First, the friendly white cab driver she met earlier refuses to pick her up now that she's black. From this, Lois learns that racism exists. She learns this lesson again when she takes the subway, and people"¦look at her a little weirdly?

This is all by her narration, by the way. In the actual art, nearly everybody seems to be not really paying attention to her at all, save one guy. Lois responds to these events with an extremely odd choice of words. "Is that what happens every time these human beings ride in a subway?" she asks. Referring to the entire African-American population as these human beings seems suuuuuper weird to me. There's just something off about the phrasing.

But then, there's something off about most of this comic book. 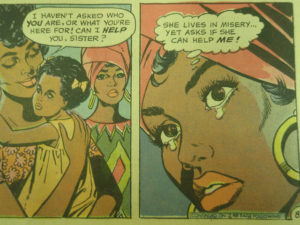 This next two-page stretch seems like it would be good, but it isn't. We'll discuss that in a moment.

Lois comes to the frankly dangerous living quarters of a black woman and her baby. There are fires and rats, and plaster falling from the ceilings, the works. Lois is horrified. So the basic premise that black people were/are disproportionately forced into terrible slumlord housing via racist real estate practices is pretty spot-on.

But due to the fact that this NEVER COMES UP AGAIN, it doesn't work. Superman doesn't help out, Lois doesn't do anything about it, and all of these people just continue to live their lives in horrible conditions.

This is a Metropolis problem, and the story never addresses it again. Superman may spend many hours a week beating up Brainiac and Terra Man, but he takes precisely zero time to go help out the suffering residents of Little Africa. What a jerk. 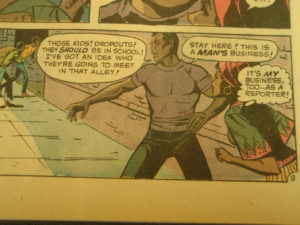 7. Oh, Right, We Need to Have Villains at Some Point

Nine pages into this fourteen-page story, the comic finally realizes that it needs an actual plot.

So Lois runs into Dave Stevens again. Dave sort of hits on her a little, but he’s distracted when he spots some teens head into an alley with stolen goods. He chases them, and Lois follows. In the alley, he sees the teens as they meet up with two of the most ridiculous-looking gangsters I've ever seen. MF-ers look like they stepped out of Bonnie and Clyde. We don't learn who they are, what their plans are, or anything else. They're just bad guys.

They open fire on Dave and Lois, and they shoot Dave in the chest. Far too late, Superman flies in and beats up the gangsters. He then flies Lois and Dave off to the ER, where the doctors explain that Dave needs a blood transfusion.

Thankfully, he and Lois have the same blood type! How nice. So she gives him some blood, and he watches, humbled by the kindness. 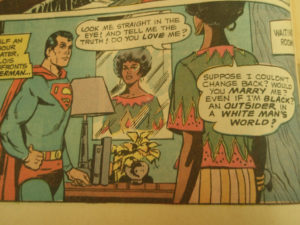 While we wait for Dave to recover, Lois has to give our story an opening page. So, she gets right up in Superman's face, and asks him if he'd still love her – if he'd still marry her – if she were black.

To his credit, Superman pretty much just says, "Hey, remember how I'm a f***ing alien? Who is literally not human? Because he is from Krypton? Why would I give a s**t what color your skin is? Plus, I'm Superman, so I'm pretty committed to not being a racist a-hole."

Lois then just moves the goalposts to "Well, why won't you marry me, then?" Superman starts to deflect, but he doesn't have to for long, because her skin starts to fade back to white. The transformation has worn off. And she completely forgets about the marriage thing. 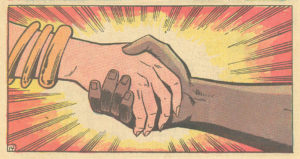 Right around that point, Lois is informed that Dave is awake again, so she goes in to see him.

But will he hate her now, Lois worries? Because, you know, he hates all white people. Lois walks in, and he reacts with surprise, and then happiness. He takes her hand in friendship.

Again, in theory, I guess this is a positive thing, but in practice, it’s super offensive. By playing up the situation this way, it becomes a story about whether or not black people can overcome their hate for white people. As literally anyone who ever studied racial issues in the United States can tell you, THAT IS NOT THE PROBLEM.

Reverse racism is so far from being a thing it almost loops back around. And what makes it even more frustrating is that this comic clearly knows that white America’s racist policies have put black America in a horrible place. The characters talk about that. It just then expects that black people should get past all that because #NotAllWhitePeople. 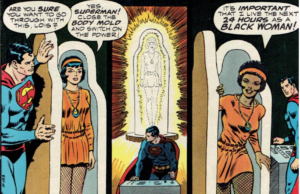 Lois doesn't help solve or even call attention to the issues raised in the story! She just decides that it’s all good because this one black person doesn't hate her any more.

This is just a troublesome comic book, and it makes you madder and madder the more you think about it. This came out in 1976. They should've known better. Hell, you can argue that comic books are still bad at dealing with race as subject matter. You can very easily argue that. But this thing is legendary for being so out of touch and bad that it became famous. Even if you could set aside the racism, it's still not good.

The story structure is really bad, Lois' arc is done within the first few pages, and important characters don't show up until late in the story. It's incredibly bad. Deeply bad. So bad that it became a punchline. And now you've been let in on the punchline! You didn't even have to track down a copy. 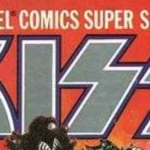 10 Weirdest Issues of the Marvel Comics Super Special
Next Post 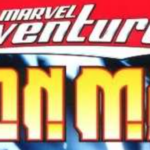