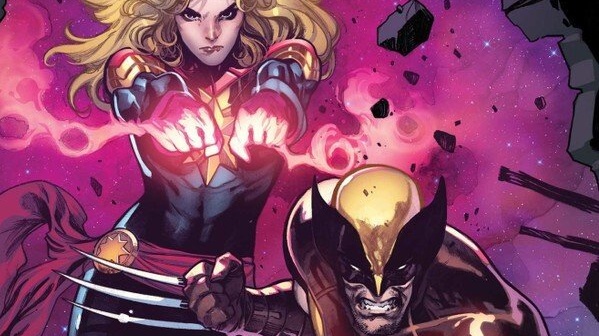 Carol Danvers is getting ready for a team-up with none other than Wolverine. As revealed by Bleeding Cool, Captain Marvel #17 is teasing quite the duo as both heroes are featured on the cover and will be uniting against a common threat in the upcoming book.

Captain Marvel #17 is set to arrive in April and Marvel recently revealed a preview of the book, including the cover. It sees the titular hero standing alongside a very angry-looking Wolverine. The two have just busted through a wall and look ready to duke it out. With whom, we’re not sure, but one has to imagine whoever is on the other side of that wall is in for a nasty surprise. Have a look.

“DEAD MAN’S HAND! It’s poker night at Casa Danvers, and with Wolverine, Monica Rambeau, Spider-Woman, Hazmat, Jessica Jones and Ms. Marvel all in the game, Carol might just lose her shirt. But who – or what – is THE NEXUS and why is it ruining this much needed R&R!?!”

This sounds like a pretty unique and fun way to get Carol Danvers and Wolverine together. Not for a typical team-up. Rather, they’re initially trying to enjoy a simple, quiet poker night and things get interrupted. It’s easy to imagine the fan-favorite mutant enjoying a night of cards with fellow heroes. The big question is, what is The Nexus? Is this going to be a one-off or will we see this threat play on in the Marvel universe beyond this issue? We’ll have to wait and see how that unfolds.

As exciting and seemingly impossible as this crossover seems, this is something that could actually happen in the live-action world now. Last year, Disney completed its deal to purchase most of Fox’s media assets in a landmark $71.3 billion deal. Fox owned the rights to the X-Men and Fantastic Four previously, which is why those characters couldn’t appear in the Marvel Cinematic Universe. However, now that Disney owns Marvel and Fox, everything is under the MCU roof, and everything is on the table.

Marvel head Kevin Feige already revealed they have plans to reboot the X-Men and Fantastic Four within the MCU. Meanwhile, Brie Larson made her debut as Captain Marvel last year in both her first solo movie and Avengers: Endgame. Both movies were massive financial successes. So we know Larson’s Carol Danvers will be back and, undoubtedly, we will see a new Wolverine at one time or another. Now, what are the odds of those two crossing paths on the big screen? It’s tough to say, but it’s not at all impossible now.

So what do you think? Are you excited about the prospect of Captain Marvel and Wolverine working together? Will you be picking up this issue when it arrives? Join in on the conversation over on Facebook or Twitter! 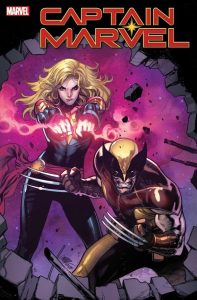