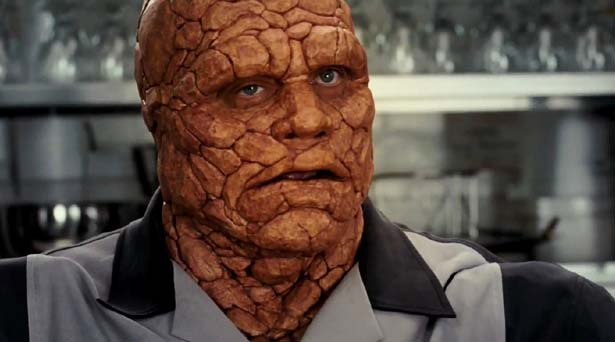 Comic book movies seem to be getting better and better. Everything about them is improving; the plots, the action, the special effects, the acting and indeed the dialogue.

However, there’s no doubt that there have been some absolute stinkers and that there are still some bad aspects of some comic book movies even today.

One thing about them that can often be terrible is the aforementioned dialogue. It can be hammy, too light-hearted, too dark or just out of place in the context of a particular story – and some characters are simply dealt a bad hand with the dialogue the’re given and/or the way in which the actors are asked to deliver it (not everyone gets the great lines of Robert Downey, Jr.’s Tony Stark or Tom Hiddleston’s Loki, for example).

In this article, we’ll run through ten characters from comic book movies whose dialogue was so awful that it was practically unbearable (complete with examples that are put into context where necessary). 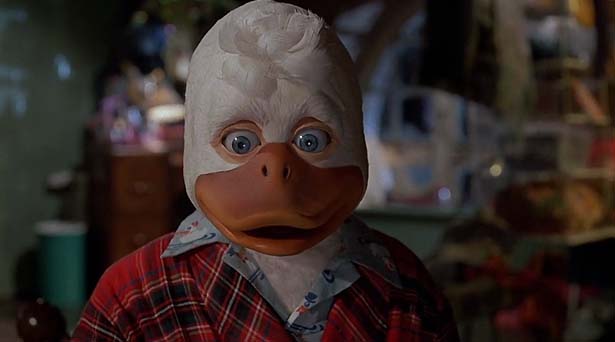 Howard the Duck’s first appearance in a movie wasn’t in the post-credits scene of 2014’s Guardians of the Galaxy like you might think. He had actually starred in his own movie back in 1986 – and it was absolutely terrible.

The character was inadvertently being flung to Earth and unable to return to his native planet of Duckworld. The plot was mostly about him trying to find a way home.

One of the main reasons for it being so bad, however, was Howard’s dialogue. It was awful – seriously cheesy. Here are some of his worst lines:

Howard the Duck: “No one laughs at a master of Quack-Fu!”

Phil Blumburtt: “Did you find the toolbox?”
Howard the Duck: “Yeah, I know why you want a toolbox – you got a screw loose.” 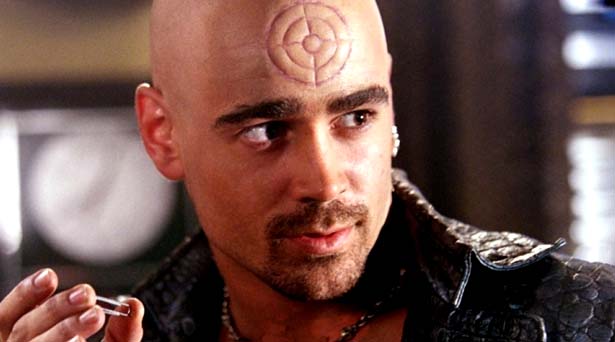 2003’s Daredevil was such a terrible movie that it almost ruined Ben Affleck’s career. Its reputation has only got worse since – especially now that a brilliant Netflix depiction of the character has shown how it should be done.

Affleck’s performance was seen as so bad that fans still hadn’t forgiven a decade later when he was controversially cast as Batman.

And yet he wasn’t even the worst thing about the movie. Colin Farrell’s Bullseye was horrendous – an appalling depiction of the classic comic book villain – and a big part of that was his terrible dialogue. Here are some of the worst examples of it:

Kingpin: “Is there anything else?”
Bullseye: “Yeah, I want a f***ing costume.”

Bullseye: “Fisk was right about you. He said you wouldn’t go easy.”
Daredevil: “Fisk? Fisk is the Kingpin?”
Bullseye: “Yeah. That whole red rose thing? He loves that shite. It’s not my style. He hired me to kill Natchios, and to gut your pretty girlfriend too. But me, I’m going for the hat-trick. I told him I’d do you for free!” 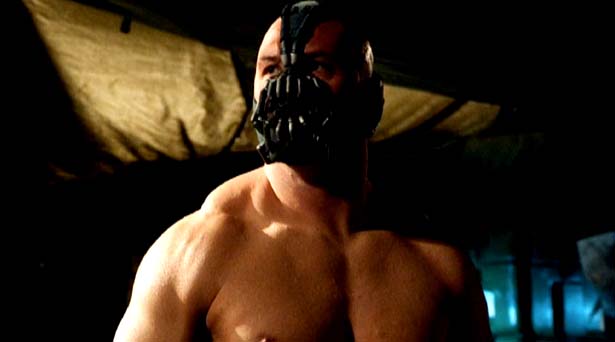 The Dark Knight Trilogy is an iconic staple of modern cinema and all three movies were good, but 2008’s The Dark Knight Rises was undoubtedly the least good of the three.

One of the reasons was for that was the villain of the piece – Tom Hardy’s Bane. He wasn’t bad, as such, he just wasn’t great like, for example, Heath Ledger’s Joker, and that partly came down to his dialogue.

It was often over the top, but it was made worse by the weird voice Tom Hardy used for the role. On paper, it looks acceptable and threatening, but hearing it in a voice that sounded like a poor Sean Connery impersonation weakened its impact and made it sound a bit silly. Here are some examples of it:

Bane: “Calm down, Doctor! Now’s not the time for fear. That comes later.”

Bane: “You don’t fear death… You welcome it. Your punishment must be more severe.”
Bruce Wayne: “Torture?”
Bane: “Yes. But not of your body… Of your soul!”

Bane: “Peace has cost you your strength! Victory has defeated you!” 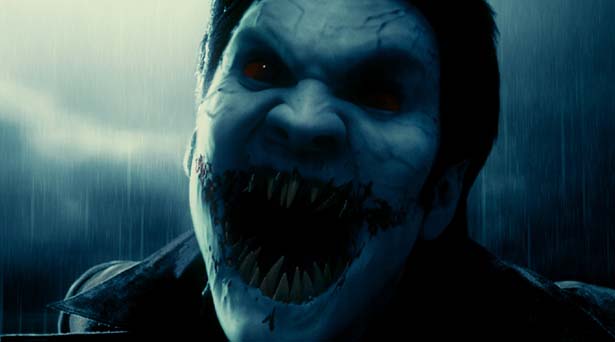 2007’s Ghost Rider was one of the poorest comic book movies of recent times – and that’s thanks in no small part to the fact that it had one of the least convincing villains in movie history.

The usually decent Wes Bentley played that villain – none other than the demonic son of the devil himself, Blackheart – but he was truly awful. Rather than the reality-warping evil monster from the comic books, he came across as a wimpy and emotional teenager full of angst!

One of the worst things about him was his dialogue. It wasn’t inherently awful, but it tried to portray the character as sinister when he simply wasn’t at all frightening. Here are some examples of that:

Blackheart: “There’s an old saying, don’t raise more demons than you can lay down. My father raised one too many.”

Blackheart: “My name is Legion. For we are many!”

Blackheart: “Your Penance stare won’t work on me. I’ve no soul to burn!” 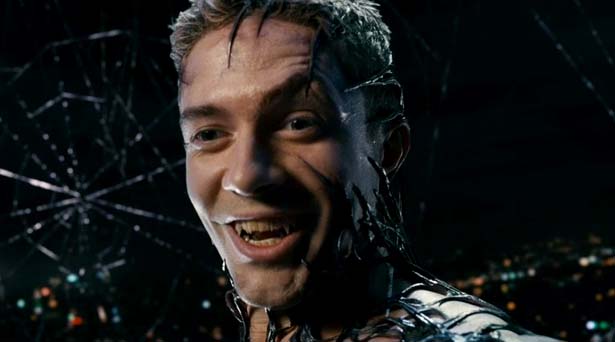 By far the worst offering in Sam Raimi’s original Spider-Man trilogy, 2007’s Spider-Man 3 also had the poorest villain in the franchise.

Topher Grace just wasn’t right for Eddie Brock AKA Venom. He came across as a wimpy, sleazy loser who was incredibly annoying – and that’s a massive shame for such an iconic comic book character.

The worst thing about him was undoubtedly his dialogue, however. Here are some of his worst quotes:

Eddie Brock: “Oh! My Spider-Sense is tingling… If you know what I’m talking about!”

Peter Parker: “I know what it feels like. It feels good. The power. Everything. But you’ll lose yourself. It’ll destroy you. Let it go.”
Eddie Brock: “I like being bad. It makes me happy.” 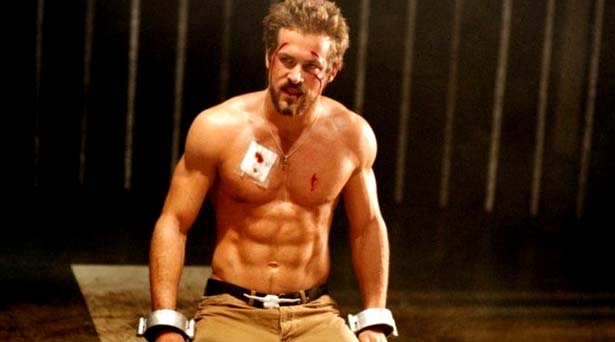 Hannibal King was played by Ryan Reynolds in 2004’s Blade: Trinity. The worst of the Blade films, King was also one of the worst characters in the franchise – thanks largely to his incredibly annoying dialogue.

It wasn’t that what King said wasn’t often funny, it’s just that it was out of place in the movie and a far cry from the more sophisticated Hannibal King known from the comic books.

He swore a lot, he talked too much in general, he was crude, he made light of dire situations that no man could possibly make light of, and he generally went over the top to the point that it got too much by the end of the movie – and here are some examples:

Hannibal King: “We call ourselves the Nightstalkers.”
Blade: “Hmm. Sounds like rejects from a Saturday morning cartoon.”
Hannibal King: “Well, we were gonna go with the Care Bears, but, uh, that was taken.”

Hannibal King: “All right, f**k! I’ll tell you about the weapon! It’s a new flavour-crystal formula. Twice the chocolaty goodness, half the calories. Plus it helps prevent tooth decay. There.” 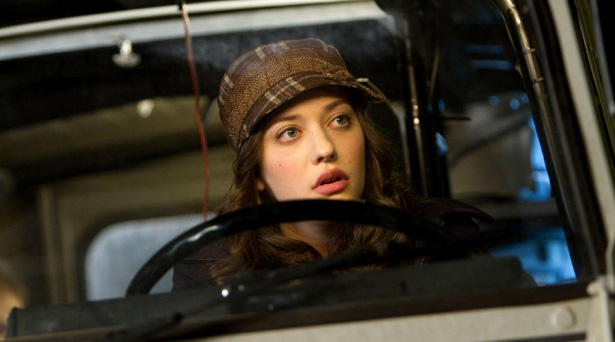 Darcy Lewis – played by Kat Dennings – first appeared in 2011’s Thor and has since appeared in 2013’s Thor: The Dark World. Simply put, she is one of the worst things about the whole Marvel Cinematic Universe.

She’s a political science student who is the intern to astrophysicist Jane Foster – played by Natalie Portman – and she has essentially served as nothing more than misplaced comic relief since her arrival in the MCU.

Her dialogue is, more than anything else, extremely annoying and these are some of the worst examples of it:

Darcy: “Whoa, does he need CPR? ‘Cause I totally know CPR!”

Darcy Lewis: “Look at you. Still all muscly and everything!” 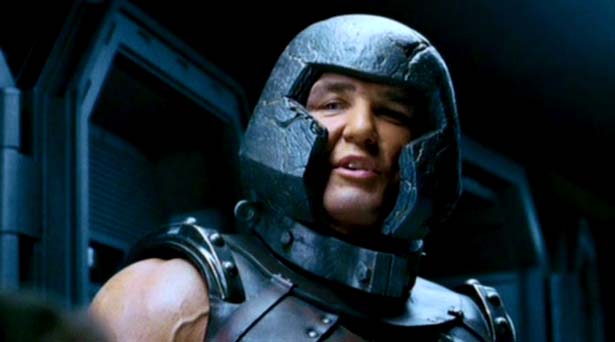 2006’s X-Men: The Last Stand was an underwhelming and, frankly, quite poor climax to what could have been a brilliant original X-Men trilogy. The first two movies were fantastic, but Last Stand soured the franchise and that was in no small part thanks to terrible characters like the Juggernaut.

Vinnie Jones played the character – real name Cain Marko – and he was awful. For starters, he was nothing like the comic book version of the character – who ISN’T a mutant, for starters – but he also looked ridiculous had some absolutely terrible lines.

His dialogue was simply hammy and unfunny and these are some of the worst examples:

Cain Marko: “Don’t you know who I am? I’m the Juggernaut, bitch!”

Cain Marko: “You gonna let me outta here? I need to pee.”

The poor Fantastic Four. Marvel’s First Family have been given a tough time on the big screen, with the first attempt at a franchise being critically panned after two movies and the 2015 reboot canned after one (with many people calling it the worst comic book movie ever).

Ben Grimm hasn’t been a particularly good character in either attempt, but in the first franchise (2005’s Fantastic Four and 2007’s Fantastic Four: Rise of the Silver Surfer), Michael Chiklis’ version was terrible.

What made him particularly terrible was his dialogue. It was corny as hell and here are some of the worst examples of it: 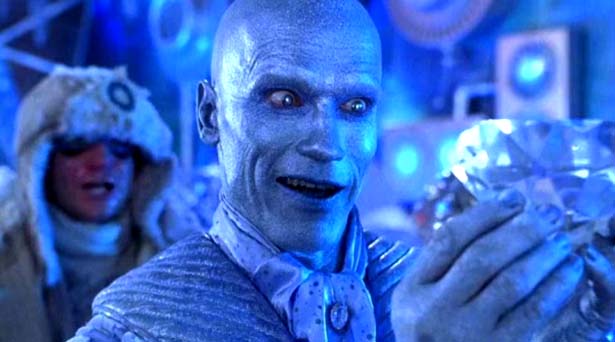 Without any shadow of a doubt, the comic book movie character with the worst dialogue in the history of the genre is Arnold Schwarzenegger’s Mr. Freeze AKA Dr. Victor Fries.

He appeared in 1997’s Batman and Robin – which really wasn’t very good at all – as one of a trio of major villains (the others being Uma Thurman’s Poison Ivy and the late Robert “Jeep” Swenson’s Bane, of course) and, unlike a lot of Arnie’s movie characters, his one-liners just didn’t come off.

His dialogue was too cheesy to make you do anything other than cringe and these are some of the worst examples (though there are literally dozens that we could have used!):

Mr. Freeze: “What killed the dinosaurs? The Ice Age!”

What do you think? Were all of these characters given awful dialogue? Can you think of any other characters who deserve to be on this list? Have your say below.