The new animated series, Justice League Action, has an official premiere date on Cartoon Network. The show will debut on December 16 with a four-part special called Shazam Slam. The show will then continue airing on Saturdays, starting December 24. If you live in the UK, however, you can start watching Justice League Action much sooner. It debuts there on November 26.

The four-part special will feature Batman, Shazam, The Wizard, and Superman, who will team up against Djinn and Black Adam. You can check out a sneak peek of the premiere below.

In future episodes, we can expect to see several DC Comics heroes and villains, including The Joker (voiced by Mark Hamill), Wonder Woman, Mr. Terrific, Martian Manhunter, and Firestorm.

Are you looking forward to the new Cartoon Network show? 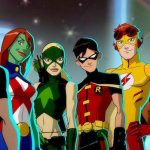