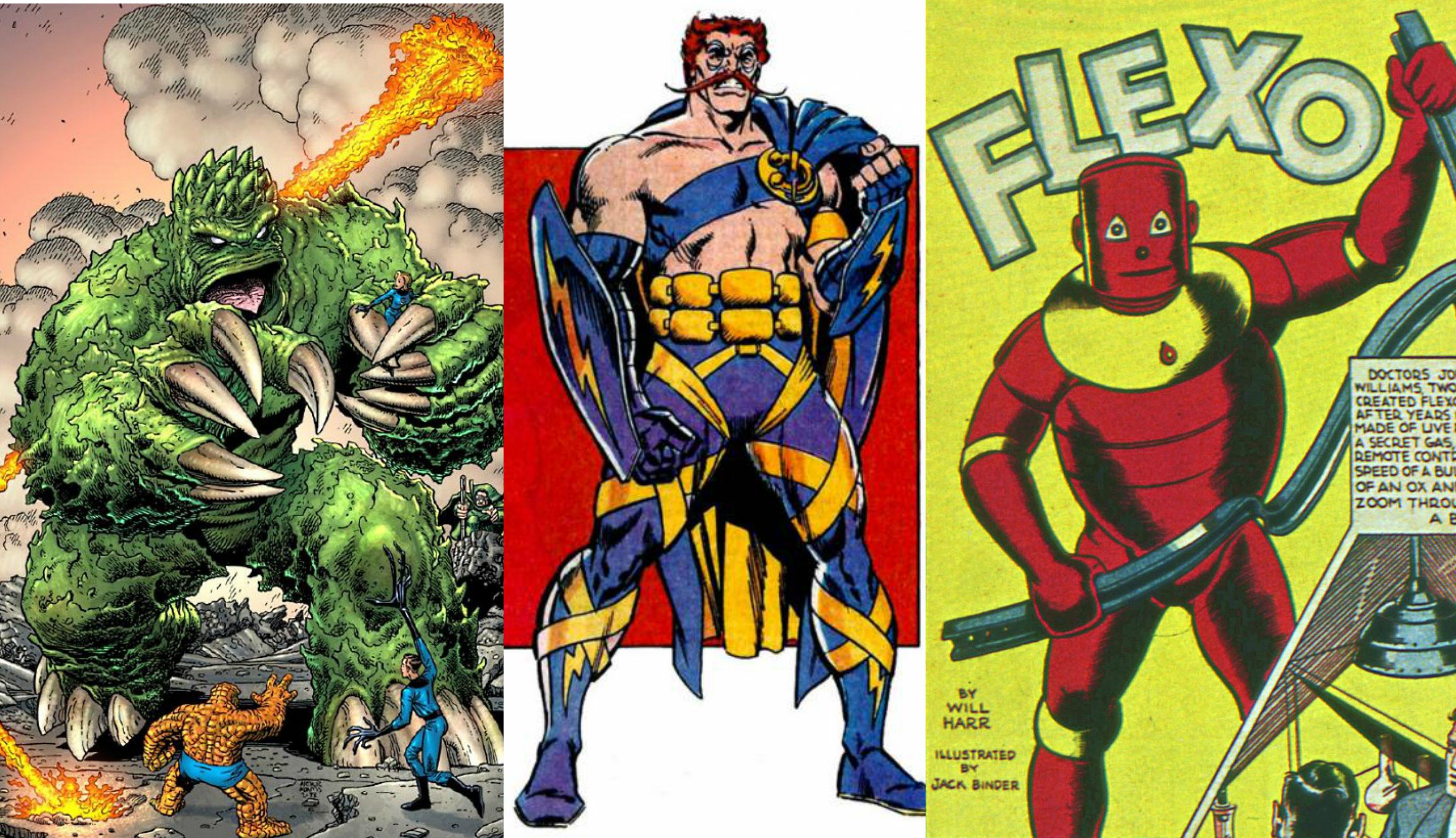 Well, people really seem to like these articles where I dig through old marvel handbooks and come up with lists of forgotten treasures of the Marvel Universe. If you want, you can find my previous lists HERE and HERE. This time, the only Handbook I could get my hands on on short notice was the 2010 Update, which pulls from the entire alphabet, but only includes a handful of characters who had appearances around that time. So I read through the whole thing, eliminated Rama-Tut and Master Pandemonium since I've already talked about them, and narrowed down this list. So here goes, more of the weirdest Marvel characters! Have fun! 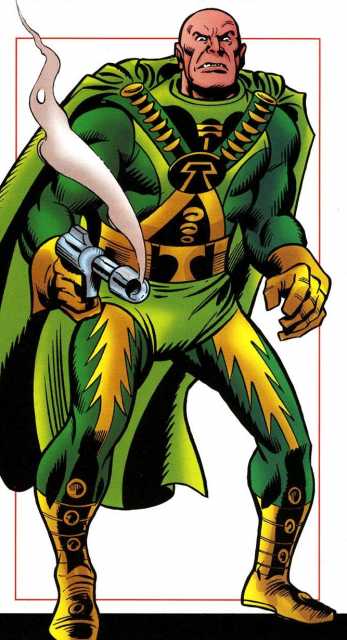 I don't feel this plan was especially well thought out. Even with all the machine guns and assault rifles in the world, you're still only one dude, Zarrko. One dude, who probably doesn't know how to aim. Eventually you're gonna run out of bullets, or get overwhelmed by the masses.

But Zarrko builds a time machine (that also crosses dimensions, because comic books) and travels to the past of earth 616 where he encounters Thor, who kicks his butt handily. Zarrko spends a bunch of time building various time machines to retry the plan, not realizing that maybe growing up in a utopian society doesn't make you the BEST at fighting people. He does have a sweet name, though. 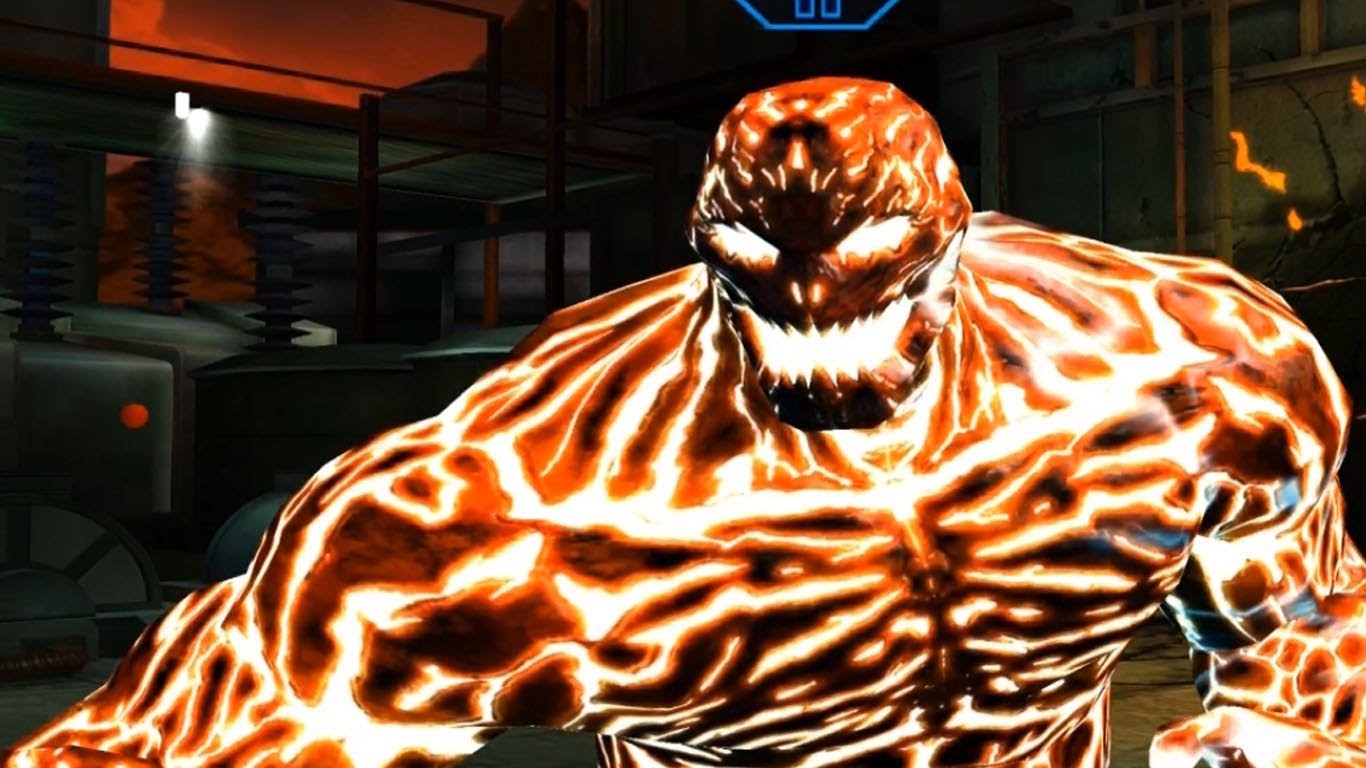 Aside from being the last entry in every Comic Book Character Encyclopedia that will ever be published, Zzzax is also a lightning monster who likes to fight the Hulk.

After terrorists bombed a nuclear power plant, the electrical energy turned into a monster, which, as far as "bombing a nuclear power plant" goes, is actually one of the LEAST horrible things that could have happened. Zzzax stormed through the New York streets and threw Hawkeye into the East River before the Hulk caught up to him. Hulk was fairly useless (ya can't punch lightning), so Hawkeye took Zzzax down.

Eventually, Zzzax was merged with General Ross, and the lightning general went after the Hulk again. He did this over and over, only to be repeatedly defeated by wires and water like a Scooby-Doo ghost.

I know everyone seems to want General Ross to turn into Red Hulk in the MCU, but I say give me Zzzax any day. 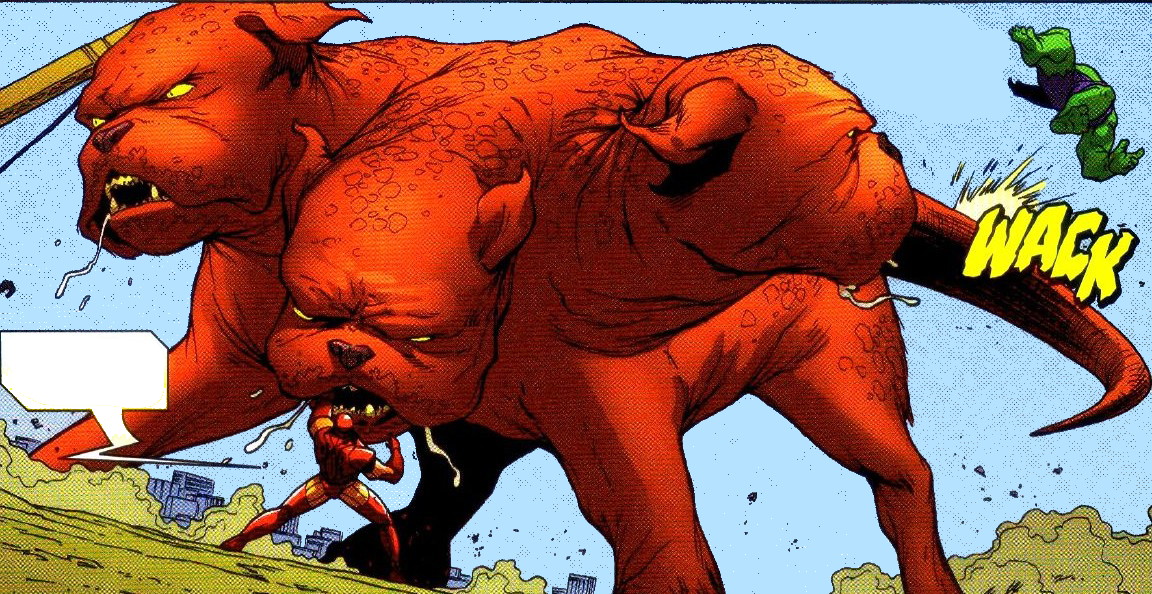 Cerberus was the standard three-headed dog monster we all know and love, until Marvel went and Marvel-ed him up. Cerberus had his soul bonded to an arrow called the Havoc-Bringer, which was used to cut a dude, allowing Cerberus to possess him. Hercules beat him down and stuffed the tri-headed dog's soul back into the arrow. 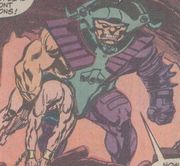 And answer 2 you should be able to figure it out on your own. If you can't, the answer is no. No it is not. It looks like a child took three play-doh colors and smashed them together real hard. But it is hilarious nonetheless.

Cosmo was, yes, in a Marvel movie, but I still think he deserves a space (PUN) on this list.

Because, you see, while the Cosmo that popped up in Guardians of the Galaxy was just a cosmonaut dog, comic book Cosmo is a TELEPATHIC Cosmonaut Space Dog.

Cosmo was a test animal for the Soviet Space Program who found his way to the the giant space head known as Knowhere, somehow became telepathic, and became security chief. The most adorable security chief in the whole darn station; yes, he is! Now he tends to bounce around space helping people and being grumpy about things. All while being the bestest dog that thinks with a vague Russian accent.

Cosmo's brief appearance in Guardians of the Galaxy made me squeal with joy in the theatre. I only wish he would have been his telepathic comic book self, but hey, you can't have everything. And the fact that we got a cosmonaut space dog in a major studio film is an incredibly amazing feat. 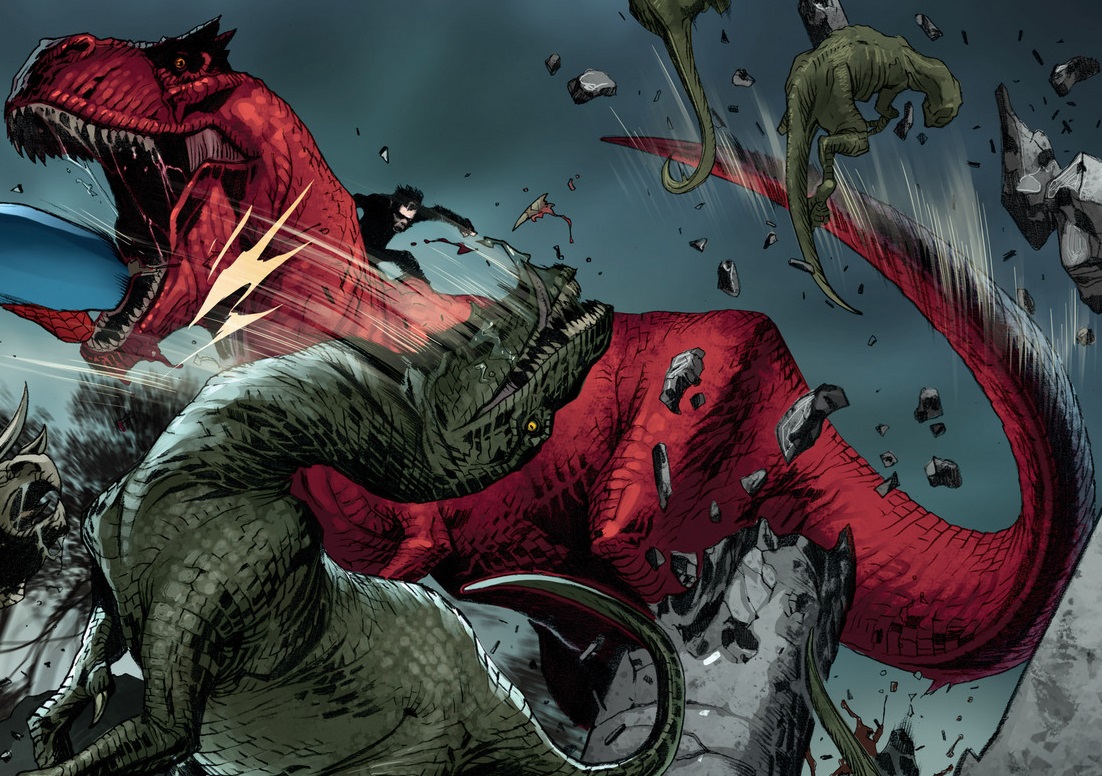 At a certain point, Jack Kirby stopped giving a crap about keeping his work grounded. We all thank god for that point. Because that point gave us Devil Dinosaur, and Devil Dinosaur is so goshdarn rad.

Devil Dinosaur comes from Dinosaur World, in case you somehow thought this entry wasn't going to get IMMEDIATELY better. Dinosaur World is an alternate prehistoric dimension where dinosaurs and pre-humans coexisted. Devil befriended a proto-human named Moon Boy and the duo went out and kicked butt across their world. They also teamed up with Godzilla once, because of course they did.

Devil Dinosaur has fought aliens, superheroes, and Godzilla, making him the best Marvel monster. He's currently co-starring in Devil Dinosaur and Moon Girl, a modern reinterpretation of the character that I haven't actually been reading, but it has Devil Dinosaur in it, so it's probably pretty great.

Plus, Devil Dinosaur sounds like the name of the metal band whose album cover he's clearly been stolen from. 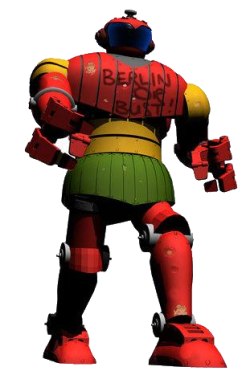 No, not THAT Electro.

Not the Spider-man villain one who was in that francize-ruiningly bad movie. No, as much as I'd like to talk about ol' starfish-face, he's sadly too well-known for this list. But Marvel's OTHER Electro? He's a prime candidate.

Because of the release of The Twelve, a decent miniseries that I'd recommend reading, a bunch of "˜40s Marvel characters are included in the 2010 Handbook, and Electro is my favorite because he's a big dumb robot.

Also known as Iron-Man (if you don't think Marvel loves reusing names, just ask Jim Hammond) Electro was invented and piloted by scientist Philo Zog, which is a name, I guess. The robot was at first used only to stop street crime via remote control, but it was eventually dispatched to help the war effort because it was the "˜40s and they needed all the help they could get. At some point during this time, the robot murdered a pirate at the request of President FDR.

And just when I thought I couldn't love comic books any harder.

That's it, I'm done, nothing I can say will be as funny as that image. That image is funnier than most things I've ever seen or heard.

Giganto isn't actually a single character, but a race of underwater creatures, called Gigantos. Giganto debuted in Fantastic Four #4, in which a newly recovered Namor bothered one into attacking New York by waking it up from a nice nap. The Giganto lumbered sleepily through NYC wrecking stuff, until it fell asleep in the middle of Midtown. At which point The Thing carried a nuclear bomb into the thing's stomach and blew it apart. Yeah, I know, that last sentence took a left turn for me too.

Gigantos continued to plague the Marvel Universe every now and again, but mostly they stuck to swimming around the open water like giant, stupid-looking sea beasts. Also, it is in Marvel continuity that Herman Melville wrote Moby Dick because he was inspired by seeing a Giganto. That is amazing.

And you know what else is amazing? 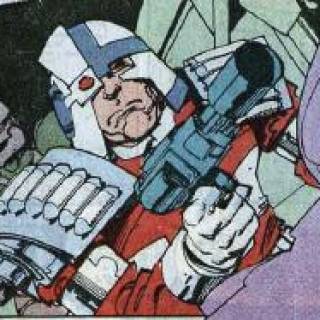 Justice Peace is another character who's on this list purely for his visual design. So, as anyone who's looked at him or his name for more than 30 seconds has probably figured out, Justice Peace is intended as a Marvel analogue for Judge Dredd.

I once had Judge Dredd described to me as "English people making a super cop based on their interpretation of America." Which is kinda really accurate. Dredd is, after all, a big grumpy burly dude who wears American flag iconography and giant eagle heads on his shoulders and loves big guns. So Justice Peace is that concept turned up to eleven.

He's decked head to toe in red white and blue, and hails from an alternate earth in which the city of Brooklynopolis stretches as far as the eye can see. His job is essentially to be a time/dimension cop, which HAS to suck in the Marvel Multiverse. People hop time and dimensions every other day; at least three entries on this list already did one or both of those.

Peace's whole day must just be writing tickets. Marvel, if you're reading I would TOTALLY be willing to write "Justice Peace: Interdimensional Traffic Cop" for literally NO money. 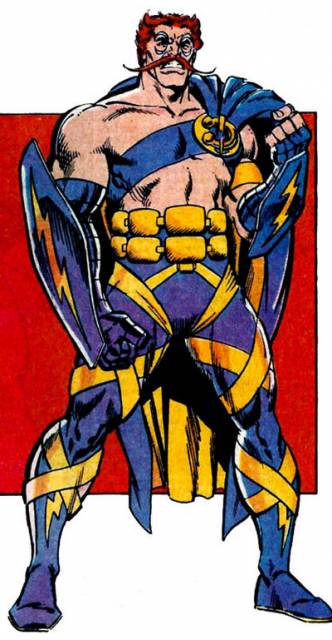 Let me give you an insight into how I come up with these lists. I'll take one of these handbooks, grab a pipe and a classy bathrobe, and sit in front of the fire thumbing through it. Usually I fill 80% of the list with characters I already know who I can definitely write about. And then I'll see a character like Leir and go "That's a sweet mustache and a ridiculous outfit, he needs to be in this list."

Leir is a Celtic god who teamed up with Thor once or twice after fighting him. He is also attired too ridiculously for me to not break it down specifically. Let's start at the bottom, with those super tight pants wrapped up in gold ribbons of silk or whatever.  Then we have his two belts. TWO"¦BELTS. I don't THINK Rob Liefeld was involved in his character design, but two belts nonetheless.

Continuing on, we have his tiny shields, which will protect literally just his forearms and nothing else. So I guess his forearms should feel pretty darn safe right about now. Then we have his cape, which appears to be compensating for a shirt, because he doesn't have one.

And then, the crown jewel, the piece de resistance, that beautiful mustache. I"¦ I've never seen anything so beautiful. 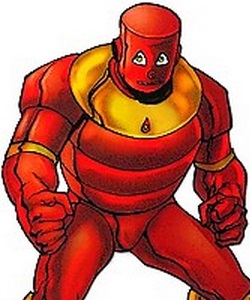 Why? Why must my eyes be subjected to this horror? What did I do?

Flexo is a "˜40s Marvel character, a rubber robot built by two brothers who fought crime and"”WHY IS IT SO SCARY LOOKING????? Its eyes look straight into my soul and see my sins!!!

It's just so unsettling. And it's a robot made of rubber. Which means you KNOW touching it would feel so not ok. Why did they give it that face? Who's decision was it to make the rubber robot look like a possessed toy from a horror movie? Really look deep into that things eyes and tell me it isn't really, really, creepy. Actually, DON'T look deep into that thing's eyes because it might actually steal your soul. I don't know why that visual design is so so terrifying, but it makes me wanna never open this book again.

So yeah, maybe Flexo is obscure for a reason. A terrifying, unsettling, reason.

That's it for this time. I think next I wanna go grab my Who's Who's out of storage and do some weird and insane DC Characters. Sounds like a fun time. Ugh, Flexo. 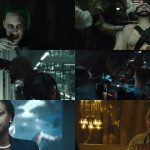 Suicide Squad - What We Know after 3 Trailers
Next Post 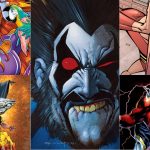 Fun Characters to Lighten the DCEU