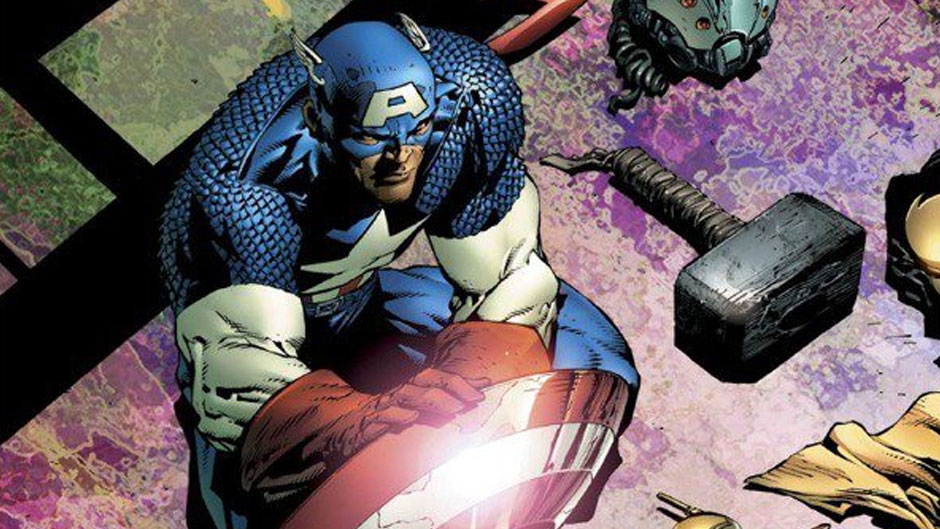 Infinity War is set to be the most ambitious crossover event in blah blah, clever Internet meme. But what could possibly follow such a filmmaking feat? Which Marvel story is major enough to follow Thanos’ arrival on and subsequent destruction of Earth? Well, here are some options for what they could mess around with. Maybe the next big Avengers movie will be about"¦ 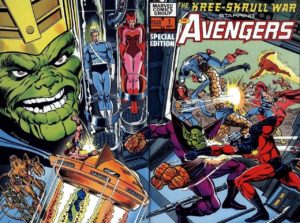 The Kree/Skrull War is THE Avengers event. It's a classic.

And the MCU is all ready to go with it. Captain Marvel will introduce the Skrulls and give us more of the Kree, but that flick is set in the 1990s. Here in 2018, we still don't know what these two feuding alien races are up to.

Fighting Thanos will inevitably lead to a better position within the cosmic scene for Earth, and that’s sure to set off additional conflict. The Kree and the Skrulls have been mortal enemies since they were introduced to each other, and I desperately want more of them in the MCU.

I only made it through about a season-and-a half of Agents of SHIELD, but I know they got into some Kree stuff there, so I assume some of it was good development? I wouldn't know. But having the Kree and the Skrulls face off with the Avengers trapped in the middle would make for one hell of a movie. 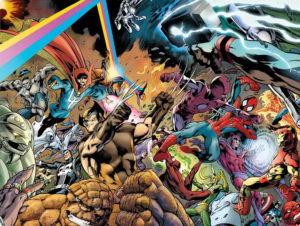 I love Acts of Vengeance.

It may be the most fun of the Marvel Crossovers. I wish they'd do a sequel.

The crossover premise is fairly simple. The Marvel Universe villains are sick and tired of being beaten up by their respective heroes, so they come up with a plan to fix things. They’ll swap opponents! For example, Ultron might try to beat up Daredevil, and Doctor Doom could take a crack at Iron Man. We haven't seen a lot of villain comebacks in the MCU (because a lot of them are dead), but it would be super enjoyable to see all the Avengers split up and then have to fight each others' past foes.

Maybe Justin Hammer could come after Spider-Man with his army of drones. Or Vulture might attempt to take out Iron Man. Or they could do Captain America vs. The Abomination. Sounds fun as hell, if you ask me. 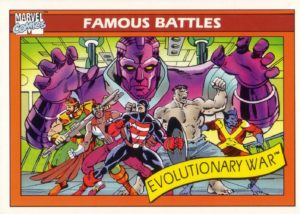 That purple glove is probably a clue about a certain time-hopping villain we'll talk about later, but it could possibly also be a tip of the hand toward the High Evolutionary, a super genius geneticist who wanted to hyper-evolve all of humanity into the future.

He decided to do this by dispatching teams to find the Marvel Universe’s power sources, and then steal or eliminate them. The goal was to steal the Terrigen Mists and master the Savage Land.

His other aim was to sterilize the Mole People, which seems horrific. Also, the Marvel Universe has Mole People. And they’re a little weird.

High Evolutionary could be a fun villain for the MCU to play with if they want a new big bad once Thanos becomes space dust. Plus, if they suddenly decide to introduce mutants, they could use High Evolutionary's experiments to easily sneak that through.

They almost definitely won't do this, but it would be interesting to see them try.

Spinning out of Secret Invasion, the keys to SHIELD were handed over to the man who came out of nowhere to save the day: Norman Osborn, aka the Green Goblin. We haven't seen the MCU’s Norman Osborn yet, but I think introducing him as SHIELD's new director would be a dramatic change of pace.

In Winter Soldier, HYDRA secretly perverted and weaponized SHIELD. But in this case, someone would very publicly take a governmental body down some extremely dark paths. This would give us an excuse to make Spider-Man a main Avenger, and that would set him up to take down Norman Osborn's Green Goblin in his own movie.

An evil businessman who corrupts a government force to make an illicit profit? I can see that resonating with some people. 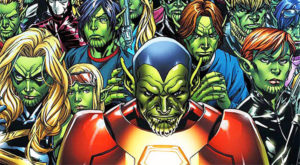 We already know that 2018's Captain Marvel will introduce the Skrulls to the MCU, and that gives us a nice window into the 2008 blockbuster storyline Secret Invasion.

That comic reveals that certain Marvel heroes and villains were abducted and replaced with Skrull sleeper agents. Then, when that programming broke down and they revealed themselves, the full-on Skrull battalion visited Earth. They were accompanied by a platoon of Super Skrulls, who’d each been gifted with the superpowers of three Marvel heroes.

Revealing that there are Skrull sleeper agents in the Avengers' midst would sure create a shake-up. In Winter Soldier, we had a taste of something similar with HYDRA (Sitwell, you bastard), but this would be on a whole "˜nother level. The Skrulls are scary villains with a unique ability to disappear and blend into the background. Their introduction would truly constitute an Avengers-level threat. 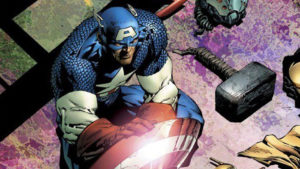 I mean, there's always this one.

If you want to reboot your Avengers team for a new generation, you could always adapt the comic that did that exact thing.

In Avengers: Disassembled, Scarlet Witch lost control of her powers. That set off a chain of horrific events that killed half of the Avengers lineup and disillusioned many who survived. In the aftermath, a group of heroes who responded to a prison break at the Raft banded together to form a new team of Avengers. They kept Cap and Iron Man (the MCU probably wouldn't have), and added Spider-Man (likely), Spider-Woman (maybe), Luke Cage (never gonna happen, sadly), and Wolverine. And if you wanted to bring X-Men characters into the MCU, it would be smart to begin by adding just one or two. And the obvious starting point is obvious.

This would be a good way to kick off a new MCU era, but it would waste Scarlet Witch as a character, and that would kinda suck. Also, if they follow the storyline from the comics and kill off Scott Lang, I'll be endlessly pissed off. 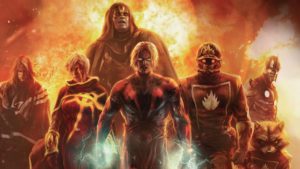 Cosmic Marvel is quite fun.

I mean, we saw how awesome it could be in the Guardians films and Thor: Ragnarok, but it appears that the time has come to make a big space epic. And for that, I'd suggest combining the first and second Marvel Annihilation events.

In Thanos’ wake, the Annihilation Wave heads for Earth, and our already beaten-down heroes have to pull it together to fight against it. They'd be way out-powered, so they'd have to bring in additional cosmic-powered heroes, such as Captain Marvel, Adam Warlock, and Nova. And once they fought their way through the first groups of aliens, they'd come face-to-face with the true threat: Ultron, who survived his incredibly brief Age by beaming his last refuges of consciousness into outer space, where they all found a home with the alien machine-people known as the Phalanx.

An old enemy returning in a new way is pretty much the only "pure Marvel comics" thing that we haven't yet seen in the movies. It would be fun! 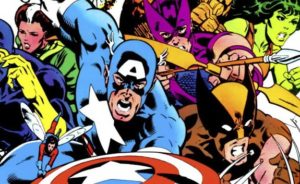 A cosmic entity known as the Beyonder gathers a bunch of heroes and villains for the purpose of smashing them together like a toddler playing with his Marvel Legends"¦or me at my desk, playing with my Marvel Legends when I should be trying to brainstorm column ideas.

In this story, She-Hulk joins the Fantastic Four and Spider-Man gets his black costume. Obviously, most of theMarvel Cinematic Universe villains are dead, but the Beyonder has nearly unlimited god-like powers, so he can bring them back.

A big heroes-versus-villains brawl would be crazy fun, with the Avengers who survive Infinity War engaging in big punch-em-ups with Hela, Abomination, Whiplash, and The Red Skull. A big, all-out brawl is the kind of comic book storytelling that hasn’t happened in the movies.

It would be fun to see. 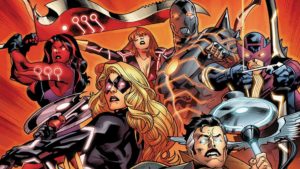 Fear Itself is one of those comic book stories that aren’t great, but could become awesome movies. Like Civil War. Or Iron Man: Extremis.

In Fear Itself, Odin's evil brother returns from exile and attempts to conquer Asgard by releasing a bunch of evil hammers that possess whoever picks them up. In response, the Avengers, the Asgardians, and the other nine realms team up to save the world from destruction.

You might be thinking, "How could the MCU do this story when there's no Asgard left to conquer? It was all destroyed!"

I'd say, “Exactly. Asgard's destruction awakens the long-dormant Cul, who weaponizes the secret reserve of evil hammers to conquer Earth and make it the New Asgard.”

This would continue Ragnarok's commentary on imperialism, and would feature an Asgardian-Iron-Man-Armor-clad Tony Stark fighting Hulk with a Thor hammer. How is that not incredible?

Honestly, Kang may have the best chance of actually showing up in Avengers 4. The Russos teased a purple glove and some set photos that made it look as though they were going to include time travel or extended flashbacks in the movie. Both of those point toward Kang.

Kang travels time in an attempt to defeat the Avengers and Fantastic Four, with the goal of ruling the future unchallenged. He’s used several names in his quest, including Rama-Tut, the Crimson Centurion, Iron Lad, Immortus, and too many more to list here.

But for Avengers 4, he'd just have to show up as the Lord of Time and mess around with key moments in Avengers history. That way, you'd still have scenes with Avengers who'd died in Infinity War, but you wouldn’t have to bring them back to life!

The MCU is so expansive that there are all sorts of time periods to visit. 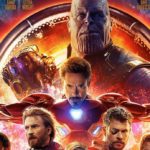 10 Important Moments from the New Infinity War Trailer
Next Post 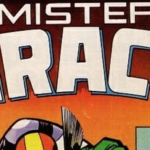