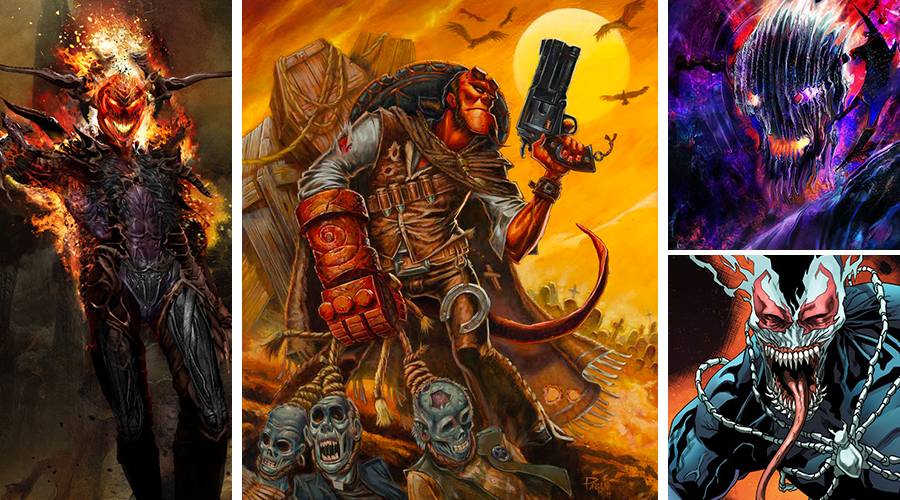 Bottoms up and the devil laughs, folks, because it's time to raise a little hell. I swear to God, I will give a shiny new dime to the first person to tell me what that's a reference to. I won't actually give you money; I was lying because promising a deal I won't deliver on is the best possible way to start off a list of comics' greatest demons. The best of the worst, folks. So let's rock some weird friggin' demon monsters. 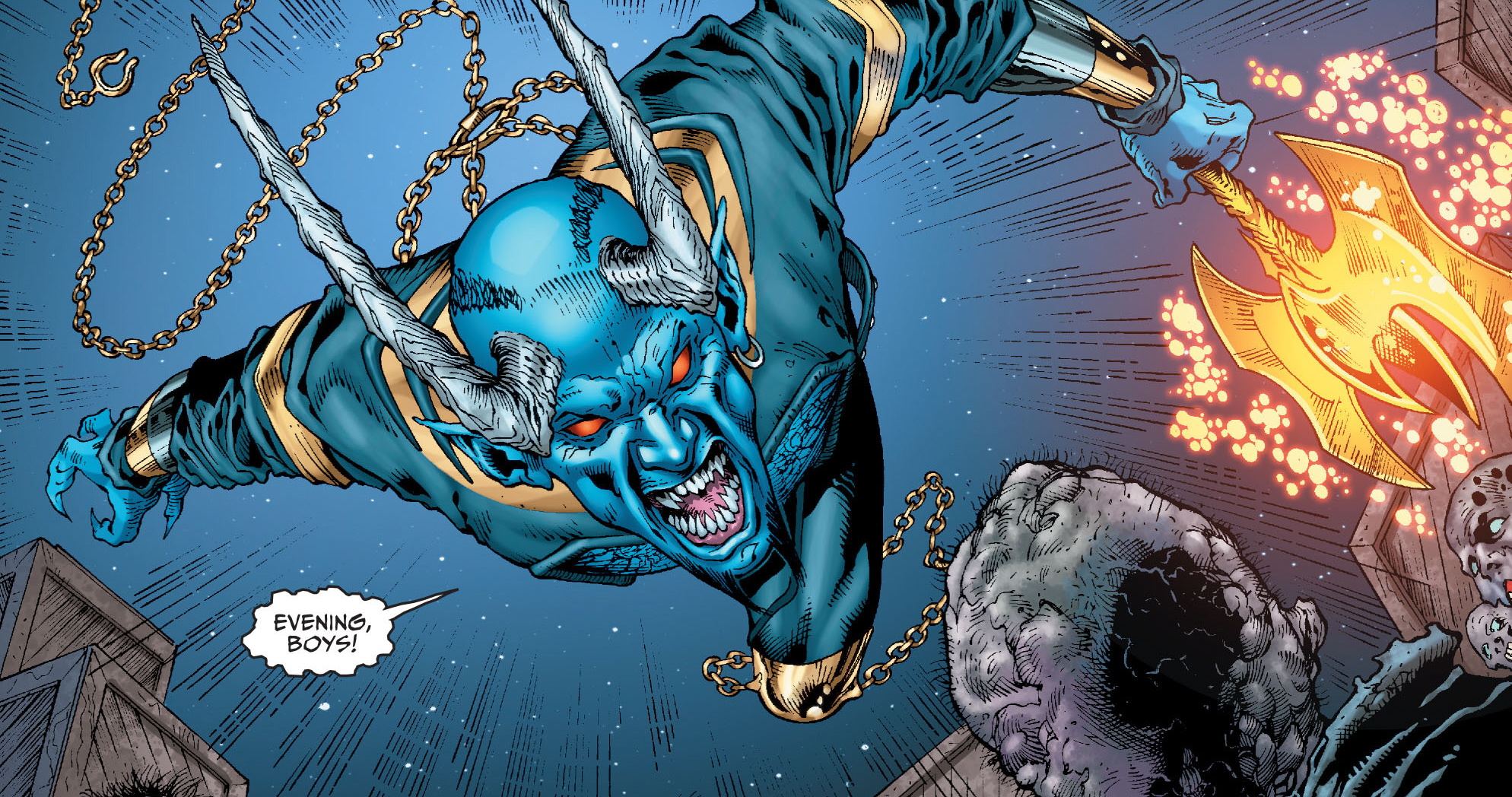 Dan Cassidy was a pro Hollywood stuntman for a long time, albeit always in dumb schlocky trash. But his last project was the horror flick The Blue Devil, for which he had to wear a mechanical monster suit equipped with all sorts of gadgets and gizmos.

After the crew accidentally freed a vicious demon named Nebiros, Dan was fused to the costume. This gave him superpowers, but trapped him in the suit forever.

I know what you're saying: That doesn't make him a real demon, so why is he on this list, you wonderfully charming internet writer man? Well, you would've been right, if not for Underworld Unleashed.

In that story, Dan made a deal for stardom with Neron, but it cost him his loved ones. In his grief, he fought against Neron and came away imbued with demonic powers as a real Blue Devil. And he's never been better. 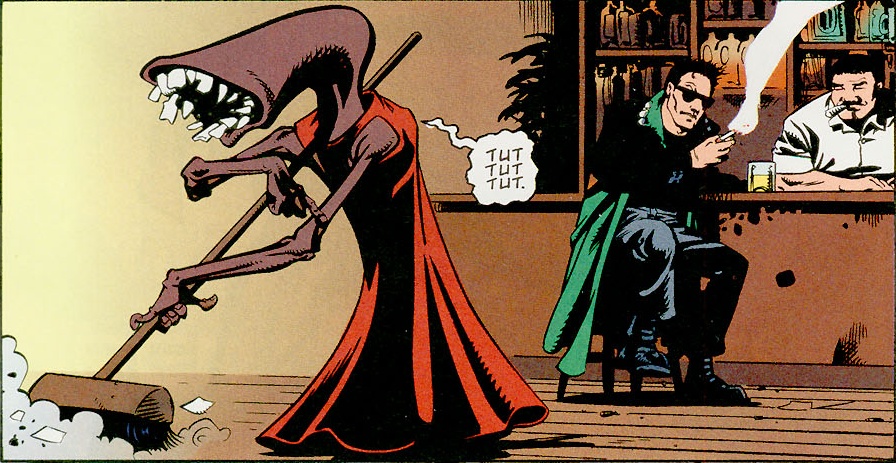 God I love Hitman. Hitman is the single most underrated comic book DC's ever published. Seriously, it's friggin' amazing.

And a good example of why is Baytor. Baytor was the patron demon of the criminally insane, and all he does is shout his true identity to all who will hear it. He became a bartender at Noonan's and a buddy of Tommy Monaghan during his time on earth. He also worked with Etrigan the Demon from time to time. But he would outlive Tommy (in one of the saddest scenes to feature a giant-mouthed demon that I can think of), and go on to be a part of Six Pack's reformed Section 8.

He was King of Hell for a time too. The other Kings of Hell don't like to talk about that. Baytor was so feared and sought after that he even earned the ire of the Spectre. Who immediately gave up looking rather than deal with the Section 8 crew. Wise choice. 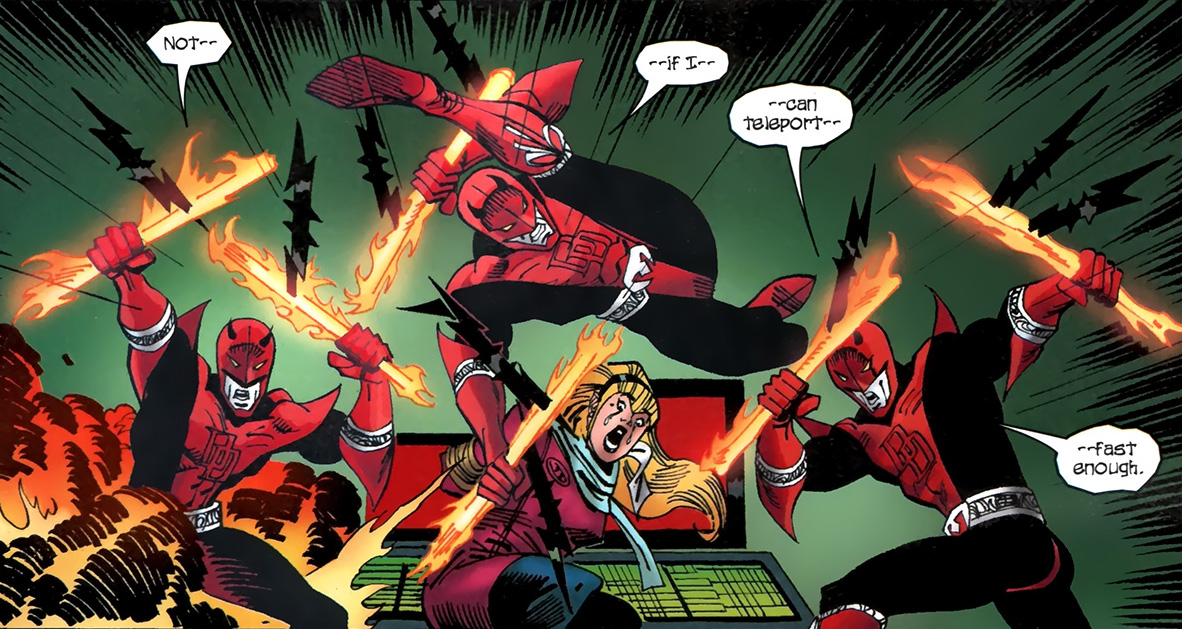 What If was my favorite Marvel comic book for a long time, and it’s still my most complete collection of a long run. But it only created one enduring character, that being May "Mayday" Parker. Also known as Peter Parker and Mary Jane Watson's daughter Spider-Girl.

May was so successful that Marvel created the MC2 line of books to follow up on her potential future. And one of the characters in that run was Reilly Tyne, alias Darkdevil.

Reilly was the son of Spider-Man clone Ben Reilly, the Scarlet Spider. But he suffered when an attempt to fuse Zarathos (the demon that powers the Ghost Riders) to Daredevil's body went wrong and both wound up fused to Reilly, creating Darkdevil.

Reilly used Zarathos' Ghost Rider powers in conjunction with Daredevil's skills to be a hero, although his demonic clone nature left him kind of anti-social. But hey, he looks really cool, so it’s all okay. 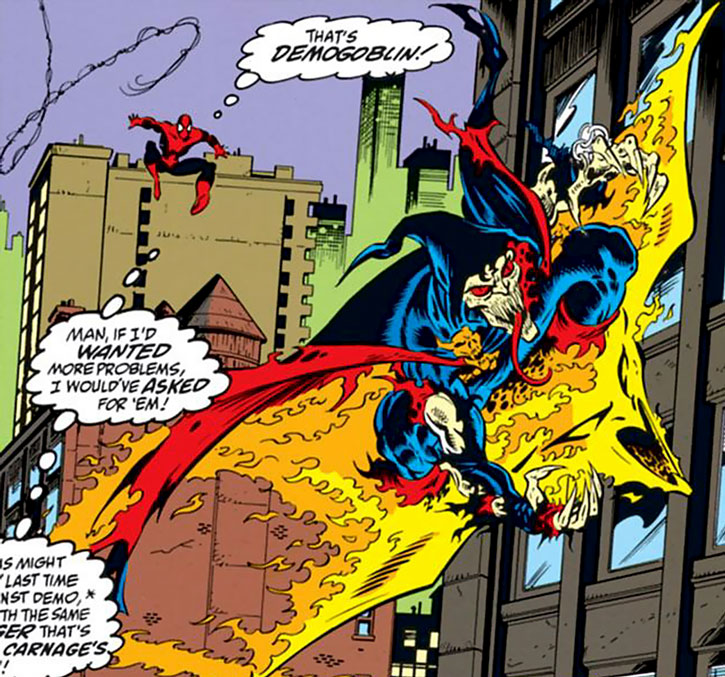 And Jason Macendale, the second Hobgoblin (depending on who you ask and how you count it), did find himself fused to a demon for a time. So we're gonna talk about it. Macendale saw the benefits of the X-Men's battle with Hell during Inferno when he pursued ultimate power. But he got possessed and became"¦still the Hobgoblin. But the demon split away and formed his own identity as Demogoblin.

Demogoblin was a Puritan fanatic who wanted to remove all of earth's sinners. So he was kinda like the Punisher, only with a glider and also a literal demon. He was actually kind of an anti-hero some of the time. The dude even saved all of San Francisco once. Eventually, he faced off with his former host, the Hobgoblin, and died saving a child.

Poor Demo, he died as he lived: being a hideous goblin demon monster. 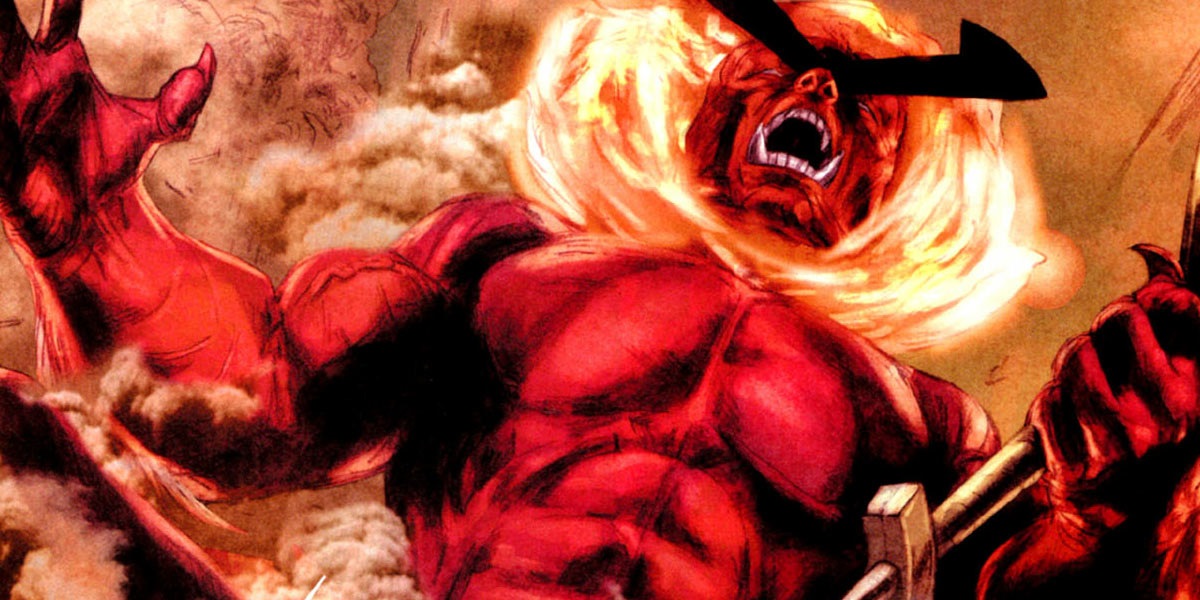 Well, look who it is.

The terror of Muspelheim, the big fire demon, the wielder of the twilight sword, Surtur. Surtur was destined to bring about RagnarÃ¶k, and he tried numerous times. The best of which was his siege of Asgard during Walt Simonson's epic legendary run on the book (a run I am still reading, mind you).

I've never really been a Thor guy, and I’ve had difficulty getting into his stuff, but that arc sold me. The high drama, the epic showdown, those desperate third act moves that pulled the rug out from under the characters, all in service of the greater plot? All absolutely sublime. The dude also fought Ymir the Ice Giant to a standstill, which is pretty impressive. He has popped up here and there numerous times, but never as great as that Simonson story, aka my favorite Thor story of everything I've read.

But then, I love Surtur. 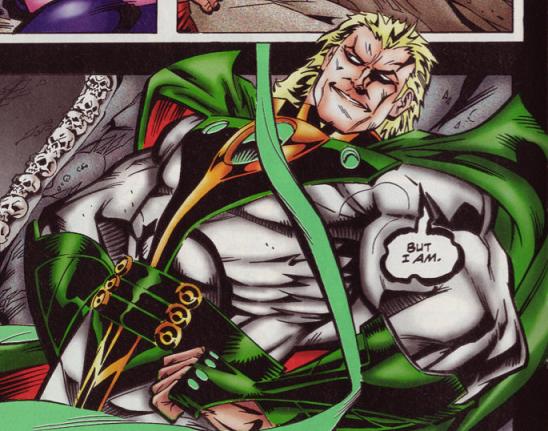 Neron is the DC Universe's resident trickster demon. He has a thing for fluorescent green, which looks so freakin' good when printed.

Neron had what was actually a pretty solid plan. He gathered up a bunch of d and e list supervillains and promised that he could give them upgrades for one cheap price: their souls.  And some of them took him up on that deal. But in the end, the combined might of Captain Marvel and The Trickster brought him down, and that was the end of Underworld Unleashed. He popped up again a bunch of times, most recently in the Midnighter and Apollo miniseries. But his costume was so flippin' great, and he's always been one of my favorites.

Dude was the nineties-ist devil you ever done saw. And hey, anyone who turned Killer Moth into a literal giant moth monster deserves some credibility. 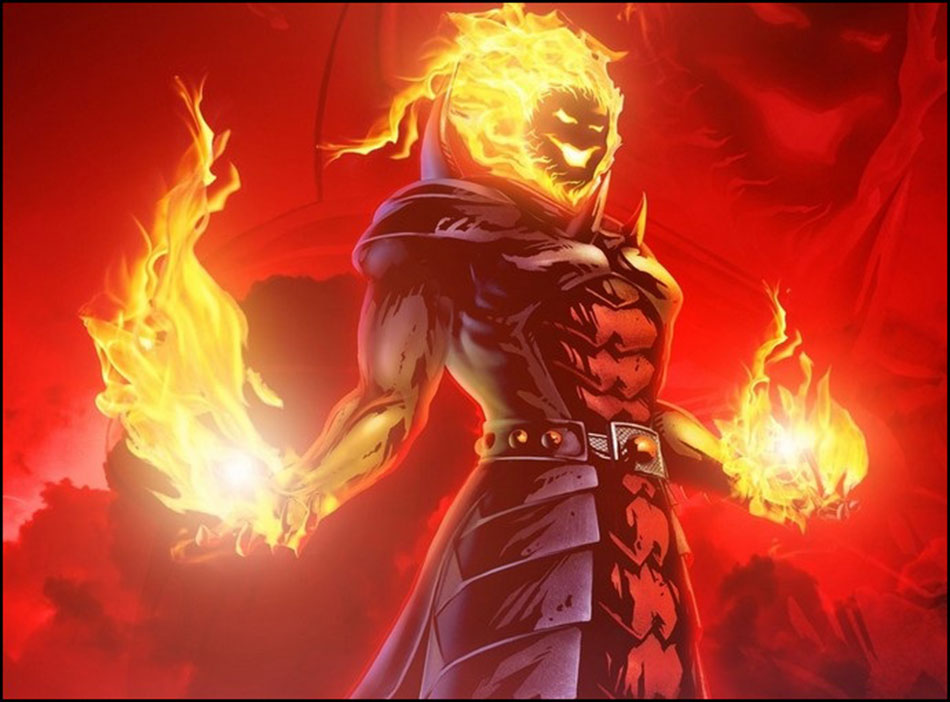 If you checked out Doctor Strange last November, you're already familiar with the dreaded Dormammu, the ultimate of Doctor Strange's foes.

Dormie lived in the Dark Dimension, a dimension as without light as it was without creative naming. There, he had a fleet of minions known as the Mindless Ones. They were not too bright. Really, whatsoever.

After briefly dealing with Captain America during World War II, Dormammu found a true foe in Doctor Stephen Strange, the newest Sorcerer Supreme. They battled numerous times, with Strange always coming out the victor. Later on, Loki and Dormie tried to pit the Avengers and Defenders against each other, but it failed. A later, smaller-scale attempt to make Ghost Rider and Doctor Strange fight failed in kind.

He possessed Strange for a bit, and then tried to lead a Mindless One invasion of New York City, but Spider-Man stopped it. Poor Dor-mumu. Never gonna succeed at taking over the earth. 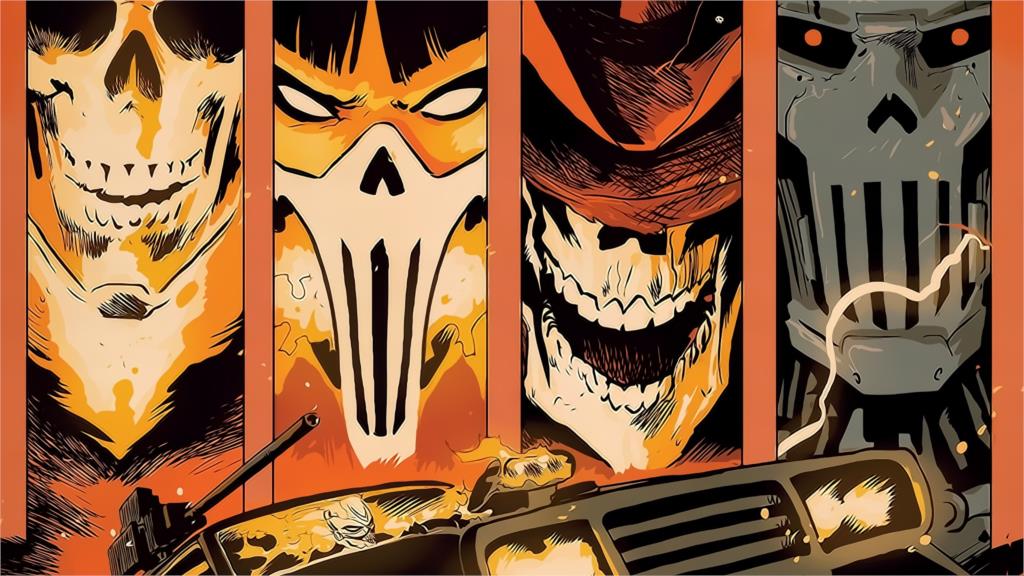 Zarathos was a demonic force bound from hell, but when it bound itself to a human soul, it created the unholy fusion known as the Ghost Rider.

So here’s a short list of prime Marvel universe dudes and ladies to get possessed by Zarathos. First, we have the most famous stunt biker Johnny Blaze. Blaze kicked and re-embraced the Rider numerous times, and is currently bound to the hell demon. Next, we have bike messenger Danny Ketch, my personal favorite and the nineties' resident Ghost Rider. Then there's the vicious, scythe-wielding Alejandra Jones. She was fun; I wish she'd lasted longer as the Rider.

(I know I'm excluding Robbie Reyes, but, while I love him, he isn't possessed by Zarathos. So I can't rightfully include him here.)

But what other Ghost Riders were there? Well there's the flaming nunchuk-wielding Bai Gu Jing, the African Baron Skullfire, the former slave Caleb, Ghost Flyer, Devil Rig, and Hell-Driver, among many, many others. If there's a vehicle, odds are a flaming skull-faced Marvel character has driven it. 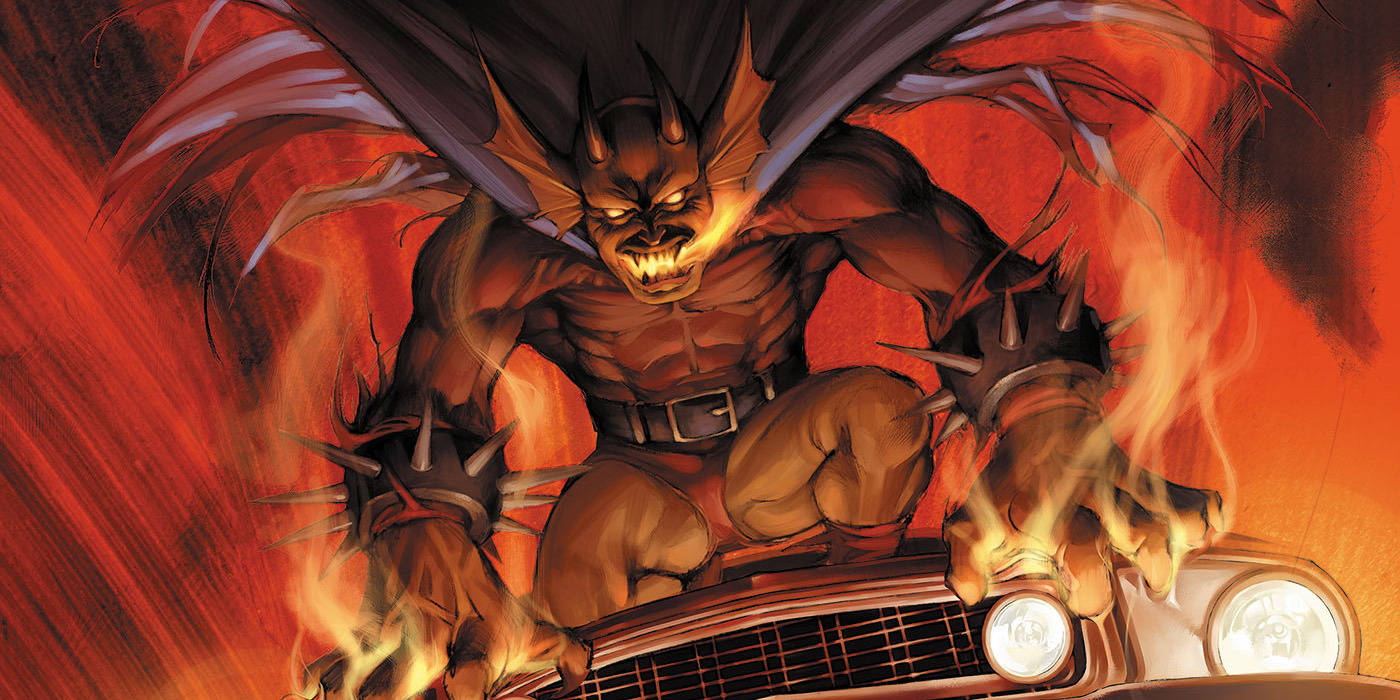 Oh what, pray tell, could this entry be?
Could it be Hell's only poet, a sight to see?

The hideous beast, who was tied to a man?
The vicious, the evil, the Demon, Etrigan!

Oh Eti, a character for all of time.
The dude who spoke clearly, but always in rhyme.

Created by Jack Kirby, that fact is true.
He fought sometimes for evil, others for me and for you.

He was immortal but bound, to a man named Jason Blood.
And when he hit you hard, you landed with a thud.

As for great stories, he's been in a few.
Like Day of Judgment, and Cosmic Odyssey, too.

He worked with Batman and fought him as well.
And occasionally found himself damned straight to Hell.

He's been on TV too, all animated.
Although in most he didn't rhyme, which left him quite hated.

Because what's fun about this dude if he ain't spitting verse?
I can't tell you at all, I'd just have to curse.

And though this entry was fun to write, it was all in the timing.
Now if you'll excuse me, I'd love to quit f***ing rhyming. 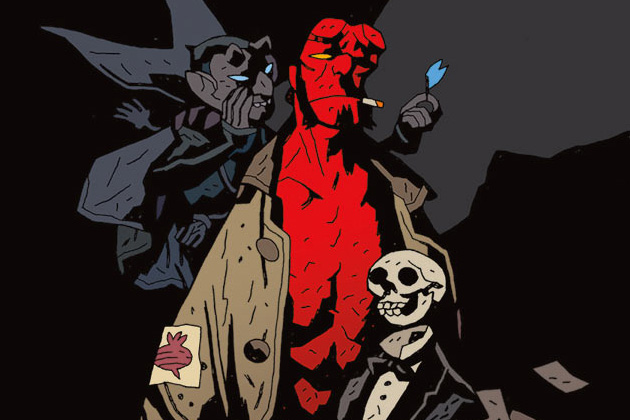 I love me some Hellboy.

Mike Mignola's big handed de-horned monster puncher is one of comics’ most enduring characters, and was even the source for two good movies, even if the first was a bit better than the second. I've written about Hellboy a couple times before, most recently when I talked about his frequent Nazi enemies. And nothing is more fun than watching a demon fight Nazis. Plus, Hellboy was the source of many incredible short stories and one-offs.

The Corpse was pitch perfect storytelling, and Pancakes was the best one-page story I have ever seen in my entire life in terms of comics. It was a master class in humor and economy of storytelling. But anyway, good old Anung Un Rama was a hero in his own right, working with the fine folks of the Bureau for Paranormal Research and Defense, or B.P.R.D. for shortsies.

The hero fought numerous horrifying creatures and mythical monstrosities, and continues to do so in various stories to this current day.

And there we go folks, have yourself a delightful little satanic panic and pick up some stories featuring these hellfire and brimstone characters. Maybe I'll do angels next. 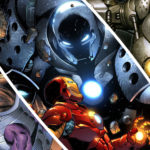 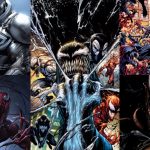 10 Things We Can Expect from Venom