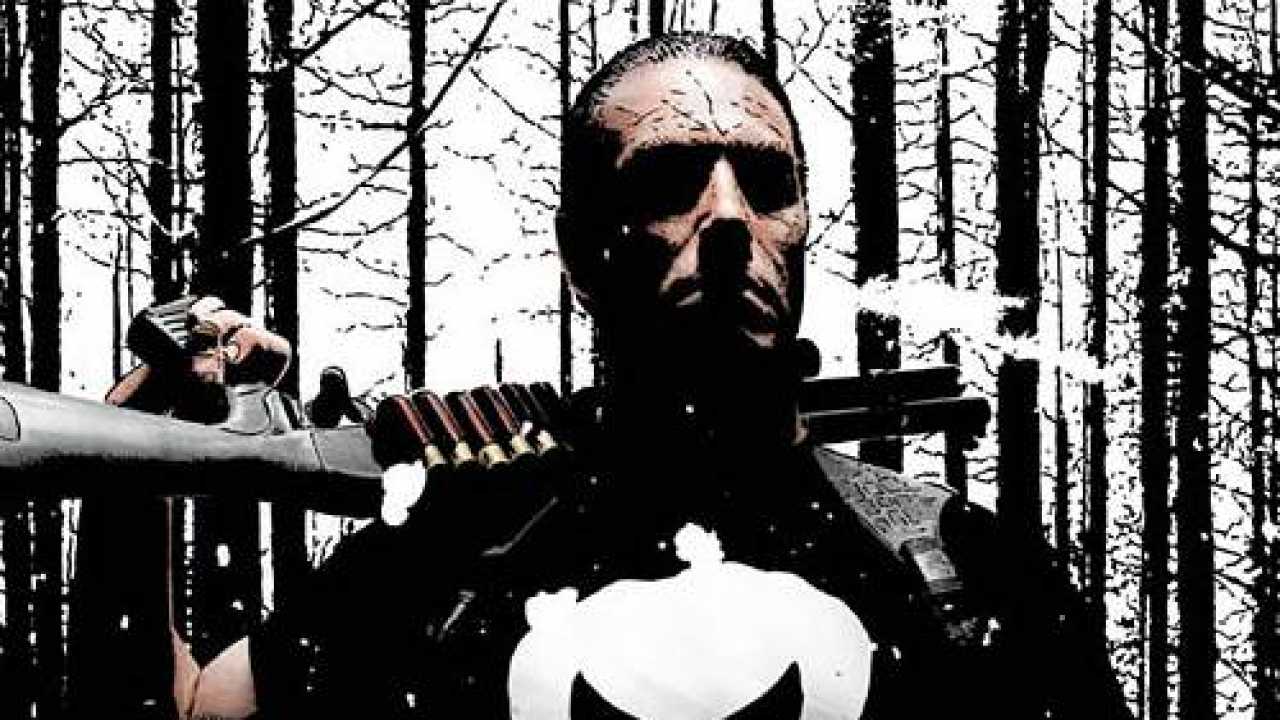 Pound for pound, Garth Ennis is in the running for the title of Best Comic Book Writer Still Working. And I only say "in the running for" because Grant Morrison is still making weird trippy books every few years. Ennis is responsible for some of the best comics of all time, and he did several of them ALL AT THE SAME TIME. I mean, holy hell, that's talent. So let's delve into the purveyor of the most foul-mouthed comic books to ever hit store shelves. 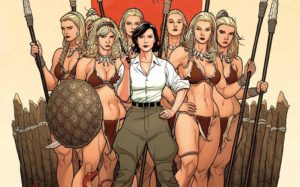 We’ll talk more about the Phantom Eagle later, but this Secret Wars (2015) miniseries is his return, and I love every page of it.

After knocking up his girlfriend, the Eagle takes off in his plane, heading for new adventures. He meets up with Clementine Franklin-Cox, and the duo appear to be transported far back in time, to an era when dinosaurs still roam.

The rest of the series is the buffoonish and selfish Phantom Eagle and the much more competent and much better equipped Clementine surviving dinosaurs, a harsh climate, and a tribe of warrior women. But this buddy comic is more about how much they hate each other.

It's a fun time that is made far more fun by having dinosaurs in it. 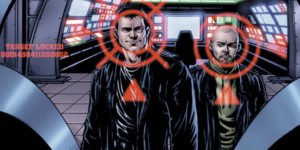 Look, this is my guilty pleasure, okay?

It's definitely one of Ennis' lesser works, but I can't help but like it. The story is centered around Wee Hughie, a Scottish gentleman whose girlfriend was horribly killed as collateral damage from a superhero fight. As a result, he winds up encountering The Boys, a crew of angry hero-murderers who are determined to expose and kill all of Earth's supposed superheroes for being corrupt, disgusting deviants.

It's a truly gross comic that really does trade off its shock value and obvious allegories about popular superheroes doing horrible things. It's tough, because it's one of the few Ennis things that I won't call good, but I can't help but enjoy its cynicism and filth. It's like rolling around in delicious slop. However, the series also has an interesting mythology about superheroes and supervillains around it.

As far as super-cynical "superheroes aren't real, all people suck" comics go, it's at least better than Wanted.

8. War is Hell: The First Flight of the Phantom Eagle

We all know that Ennis loves him some war comics. But he does tend to focus on more recent wars, including World War II, Vietnam, and sometimes the Gulf War. But War is Hell: The First Flight of the Phantom Eagle takes it all the way back to World War I for some early air combat.

Karl Kaufman was very excited when he entered World War I in 1917. He wanted to fight. And fight he did. Ennis is especially good at showing the grimy horrors and mundane awfulness of warfare, and here he gets the chance to apply that to World War I air combat. And it shines.  The story of a young hotshot being turned by the fires of conflict into a battle-hardened pilot is a good one, and it’s one that's deeply personal.

I've always loved stories about pilots, be they Air Force, RAF, or otherwise, and this is an excellent addition to that canon. 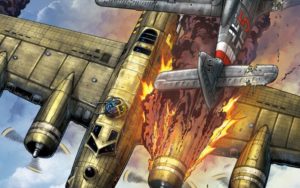 No one does war stories like Garth Ennis. The guy loves to write about the horrors of conflict.

Hell, half of this list contains the word Luftwaffe somewhere. And Ennis’ Vertigo series War Stories collection was simply that. One-off stories of warfare featuring various different artists. Each one is about horror and fear and misery and camaraderie.

Some of the tales stretch beyond the boundaries of World War II into supplemental conflicts like the Spanish Civil War. Like Ennis’ other war books, the series may be fictional, but it remains particularly educational. Ennis loves to spotlight the lesser-known oddities of war.

My favorite War Stories issue, Archangel, tells the story of the Hurricats, squads of British pilots whose planes were strapped into catapults for easier deployment. If that sounds terrifying, it's only because it very much is. From saturation bombing runs over Germany to SAS missions in the deserts, War Stories is what you want out of war comics. Violent, meaningful, powerful. 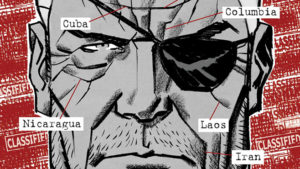 Nick Fury is a hard-fightin' son of a gun.

And Ennis is just the man to put that on display. In the Fury MAX mini, Fury continues to fight in United States conflicts throughout the Twentieth Century. "˜Nam, Cuba, Nicaragua, everywhere your history books forgot to teach you, America invaded.

It's a book about war, yes, but moreso about the types of people who go to war. And what their chosen profession says about them. The series also guest stars some notable MAX regulars, including Punisher and Barracuda. But their appearances never feel like cameos or fan service. They're in there to make points. We’re meant to compare these two men of war to our protagonist and ask what makes him different than they. Goran Parlov's art excels at drawing out the darkness and sadness in every panel, and in making the horrors of war more visceral.

It may be the best single treatise on war Ennis has produced. It’s certainly the most cohesive. 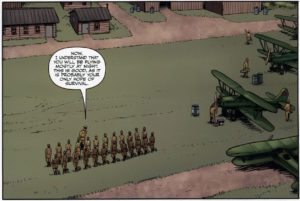 I talked about War Stories earlier, but of the Ennis war anthologies, I prefer this one.

Published through Dynamite, this book was done in three-issue mini-arcs, as opposed to War Stories' prestige one-shot format. Once again, Battlefields touches on hidden true stories of war, and drags them to the forefront. A million people have written stories about people, real and fictional, who storm the beaches on D-Day, but Ennis prefers to dig for more interesting untold tales.

The first three Battlefields miniseries exemplify this. Night Witches tells the tale of the eponymous Russian pilot squadron. These female pilots were given the worst planes in the fleet, planes that were so loud the Germans would gun them down from miles away. So what did they do? They shut their engines off and glided over encampments like badasses. Dear Billy talks about the horrible aftereffects of war and shows the Pacific Front, which most war stories shy away from.

And my favorite of the three, Tankies, discusses the British tank regiments. If you've never read about tanks, they are the scariest things of all time to fight, and almost as scary to be inside. 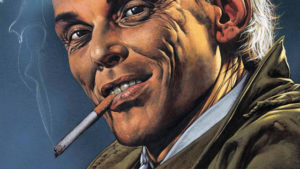 John Constantine has had numerous shots at big-screen success. But not one has been very good at all, which is depressing.

Especially so, because John has some amazing stories under his belt. I wrote about him recently, and I have to say if you like anything you've seen of either the film or television versions of Constantine, please go check out Garth Ennis' run. Dangerous Habits is my favorite Constantine story in a walk, with Royal Blood as a very close second.

And his work through Tainted Love added real depth and tragedy to the character. If you need a primer, in Dangerous Habits, John Constantine gets lung cancer from his constant cigarette smoking, and has to beat it by tricking the Lords of Hell.

It’s maybe the most rad comic of all time, and that includes the comic about a ninja who is also a doctor. 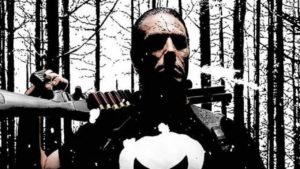 The best Punisher run of all time.

Garth Ennis has a very dark sense of humor, and Punisher is the place for him to let all that out. If you've never read Welcome Back Frank, the story that started their run, what are you actually doing with your time? No, seriously, The Punisher punches a Polar Bear right in the face in that comic. If that's not the platonic ideal for what you want out of comic books, I do not know what is. Ennis' Punisher run is a long one, so I'll make it easy for you right now. First is the Welcome Back Frank maxi-series, followed by the second Marvel Knights Punisher series (the first is the Angel Punisher book) then Punisher MAX, all of the specials, and Punisher Born.

All of those comics are excellent perfect majestic works of violence and humor and drama. 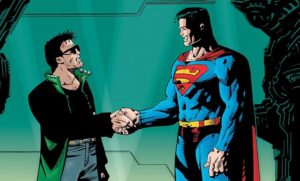 One of the best DC Comics of all time.

And it's literally in the DC Universe. Like, Superman, Batman, and Green Lantern all show up at one point or another. The story spun out of the forgettably bad DC crossover Bloodlines, which created tons of new characters. One of those characters – created by Ennis himself in an issue of The Demon – was Tommy Monaghan, a Gotham City Hitman who gained x-ray vision and limited telepathy.

In the series, he decided to not use his new powers. Instead, he just shot people in the face a lot. The series took place mostly in The Cauldron, a neighborhood in Gotham that was so bad, it's said that not even Batman goes in there. Tommy and his hired hitmen buddies dealt with tons of wacky shenanigans in the first half of the series, and went down a dark path of tragedy and blood in the second.

The series draws you in with laughs and then punches you in the gut once it's made you care. The end of Hitman #60 still makes me cry to this day. 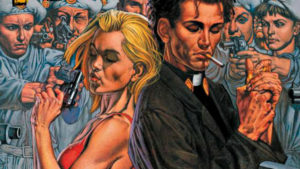 Preacher is always going to be listed as one of the best comics of all time, and putting anything else in the Number One slot would be a crime.

Ennis' writing and Steve Dillon – who’s sadly no longer with us – on art constitute the perfect matchup. Jesse Custer is a preacher. Genesis is the child of an angel and a demon. When they bond, and Jesse learns God's greatest secret, he decides to find the old man and hold him accountable. Alongside his badass girlfriend Tulip and his snarky vampire friend Cassidy, Jesse travels through the South, looking for God. This is a filthy comic book. It's gross and crude and venomous, and I couldn't love it any more. But under all that is a real story of friendship unlike any other.

Most of Ennis' comics have one central tenet: When everything goes to hell, just stick by your friends and ride it out. And there's no better example of this than Preacher. It’s sacrilegious and heartrending in equal measure. And it’s a near-perfect comic book.

And there you have it, ten wonderful and enjoyable Garth Ennis comics. Parental Advisory warnings abound, and you probably shouldn't read, uh, ANY of these unless you're at least 15. But hey, they're good, and you'll love "˜em. 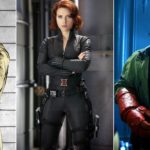 10 of the Best Comic Book Movie Costumes
Next Post 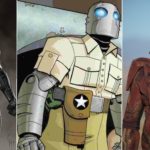