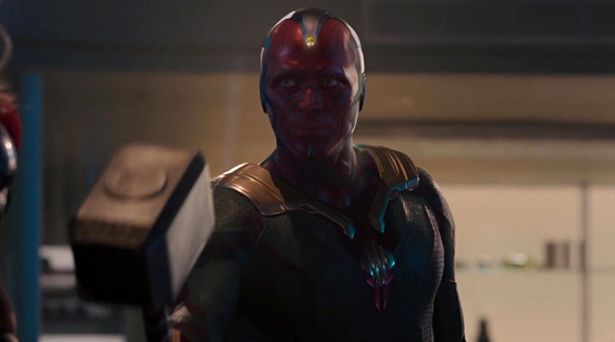 Mjolnir is one of the most powerful items in the Marvel Cinematic Universe.

Thor’s war-hammer – which can only be lifted by those who are deemed worthy of doing so – is not only a dangerous melee weapon, it can also summon lightning and wind, fire powerful energy blasts and be summoned to its wielder using thoughts alone.

Thor has appeared in many MCU movies to date, ensuring that Mjolnir has had a large number of moments in the spotlight. It has displayed awe-inspiring power and provided quite a lot of humour and this article will list examples of both. 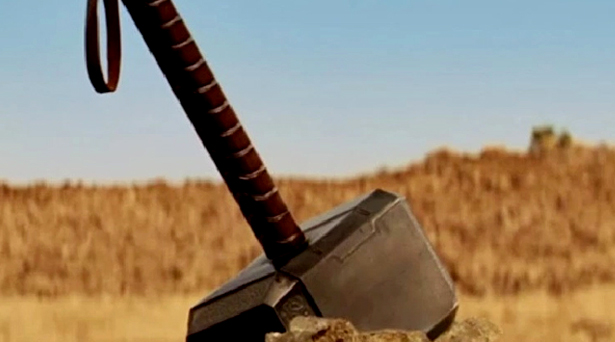 An article about “Mjolnir moments” wouldn’t be complete without the iconic unveiling of Mjolnir itself.

Even though nothing really happened involving the weapon in this scene, the post-credits sequence of Iron Man 2 saw S.H.I.E.L.D. agent Phil Coulson driving to New Mexico to the site of Mjolnir’s arrival on Earth (where it had created a huge crater in the desert).

He called Nicky Fury, told him “we’ve found it” and the first shot of the weapon was shown on screen. And now, onto the actual list…

The Attempts To Move It (Thor) 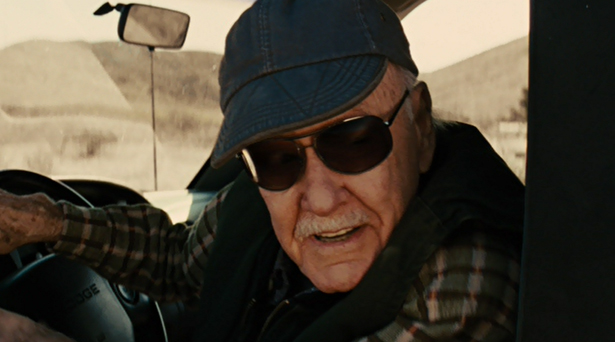 Stan Lee attempts to move Mjolnir in his truck

In the 2011 Thor movie, when it became public knowledge that a mysterious and immovable hammer had appeared in the New Mexico desert, obviously people came from near and far to test their mettle against that “immovable” theory.

Men had tried to lift it and failed, so the next step was to bring machines into the mix – trucks, to be exact – and the very best moment involved the Marvel Cinematic Universe movie tradition of a Stan Lee cameo.

Lee played a man who had a chain attached to his truck at one end and attached to Mjolnir at the other end. He drove his truck forward in the hope of budging the hammer, but all that happened was it tore the back of his truck off. Lee’s character then asked “did it work?” – which of course it hadn’t! 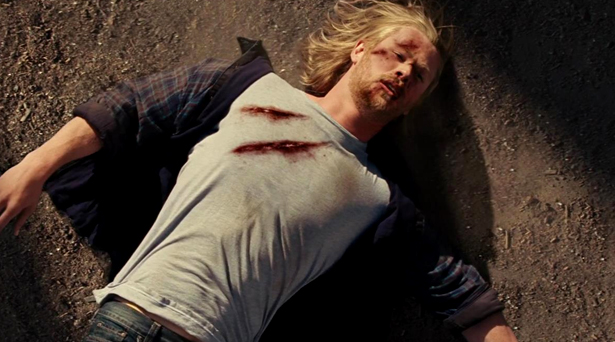 Thor after confronting the Destroyer

In 2011’s Thor, the titular hero is stripped of his powers by his father – the Allfather Odin – when he recklessly incites hostility between Asgard and the home of the Frost Giants, Jotunheim, by going there and starting a fight.

He is sent to Earth as a result, where his resentful adopted brother Loki sends the Destroyer armour to attack him. Without his powers, Thor is helpless against it and is killed. However, in standing up to it, he regained the worthiness to wield his powerful war-hammer.

As a result, Mjolnir flies towards him and brings him back to life in a blaze of glory, at which point he proceeds to easily fend off the Destroyer by using his weapon to summon a tornado that lifts it high into the sky. 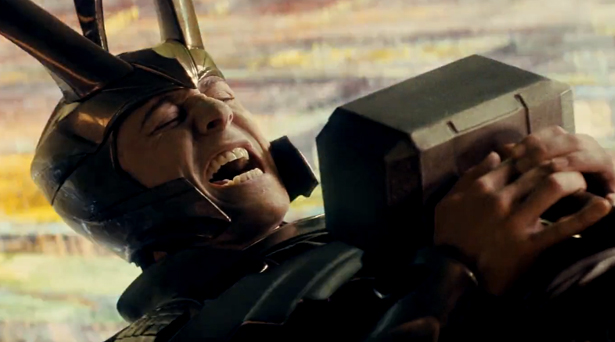 Loki with Mjolnir on his chest

Loki’s first appearance in the Marvel Cinematic Universe was in 2011’s Thor, in which he was the main villain – but he did have some weirdly warped good intentions.

He wanted to entice his biological father Laufey to attack Odin, and then use the attempt on the Allfather’s life as an excuse to destroy Jotunheim with the BifrÃ¶st Bridge, thus proving himself worthy to his adoptive father.

Thor stepped in, destroying the BifrÃ¶st to prevent Loki’s plan from coming to fruition – and trapping himself in Asgard, away from his new love Jane Foster – in the process. In the final battle between the adoptive siblings, Thor subdued Loki by knocking him to the ground and placing Mjolnir on his chest. Given that nobody other than Thor could budge the war-hammer, Loki was trapped there.

Thor Puts His Hammer Down (The Avengers) 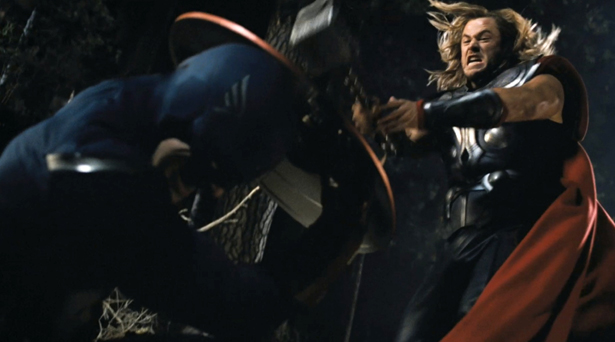 Thor “puts the hammer down” on Captain America

At the start of 2012’s The Avengers, the first real meeting between the heroic trio of Thor, Captain America and Iron Man was something of a hostile one.

After Captain America and Iron Man had apprehended Loki in Stuttgart, Germany, Thor felt that he was better placed to have his adoptive brother taken into custody back in Asgard. As a result, he forcefully took him from their custody, which prompted the duo to follow him.

Thor and Iron Man ended up fighting in some woods until Captain America arrived a couple of minutes later and asked them to stop. When he asked Thor to “put his hammer down”, he took the idea the wrong way and attacked Cap with it. Mjolnir striking Cap’s famous shield resulted in a massive shock wave that leveled the surrounding trees in emphatic fashion. 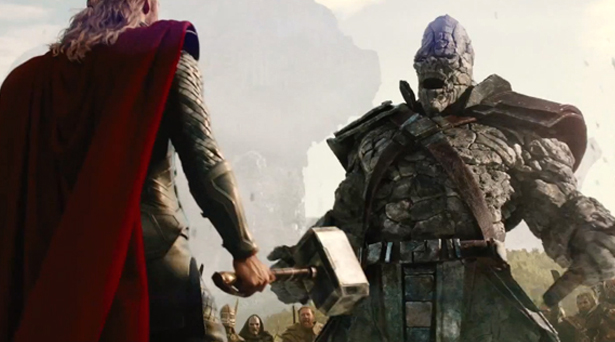 Thor versus the rock warrior

At the start of Thor: The Dark World, it is conveyed that the titular hero and his closest allies have been fighting numerous battles as part of a war to pacify the Nine Realms.

The final battle in that war takes place on Vanaheim, where Thor, Sif and the Warriors Three are part of a team of Asgardians repelling marauders from the realm.

All of a sudden, the battle comes to a halt, as a roar followed by gigantic footsteps can be heard. Through the smoke and dust created by the battle, a giant rock warrior – Korg – appears. He challenges Thor, who “accepts his surrender”, prompting laughs from the monster’s allies. Those laughs are soon silenced as the Asgardian spins Mjolnir before using it to break Korg into a thousand pieces with a single blow. He then says “anyone else?” as the entire opposing army kneels before him. 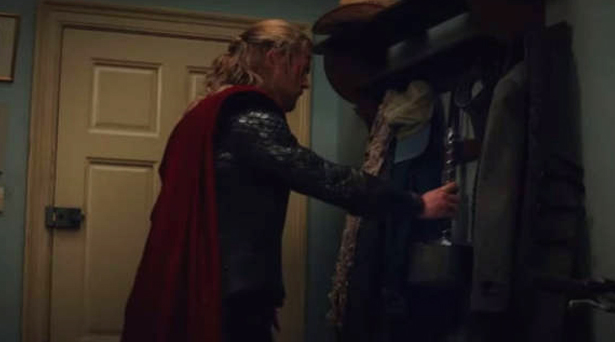 Undoubtedly one of the cutest and funniest Mjolnir moments takes place in Thor: The Dark World, when Thor and Jane Foster return to Earth through one of the Convergence portals.

They head to Jane Foster’s house where they find Erik Selvig (in his underpants, nonetheless), Darcy Lewis and Ian Boothby working on finding out exactly what Malekith’s plans are regarding the Aether and the Convergence, but Thor brings a touch of humour to proceedings.

As he enters the house, he hangs Mjolnir on the coat rack – which is perhaps a nod to an old Norse custom in which visitors hang their weapons up at the door, to emphasise that there will be no quarrel under that particular roof – and it prompted laughter in movie theatres around the world. He then goes on to summon it from the coat rack as the group leave to put a stop to Malekith’s scheme. 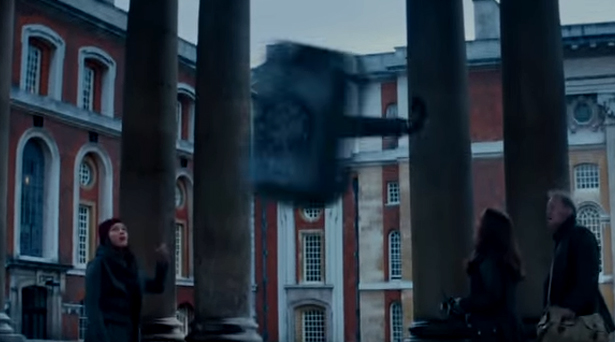 During the final battle in Thor: The Dark World, Thor is fighting Malekith across the Nine Realms while Jane Foster, Erik Selvig, Darcy Lewis and Ian Boothby work on teleporting Malekith to Svartalfheim using their equipment.

Thor and Malekith’s fight sees them crossing through portals which, at one point, results in Mjolnir and the titular hero getting separated from each other. As a result, Mjolnir does a sort of tour of the realms to get back to its wielder.

At that point, people are being teleported all over the place and Darcy and Ian, who are kissing, appear in front of Jane and Erik. This prompts Jane to say “Darcy”, Darcy to say “Jane”, Erik to say “Ian” and Ian to say “Selvig” just as Mjolnir flies past, prompting Darcy to say “Myeuh-myeuh!” – a funny throwback to her mispronunciation of the war-hammer in the first Thor movie.

“You’re All Not Worthy!” (Avengers: Age Of Ultron) 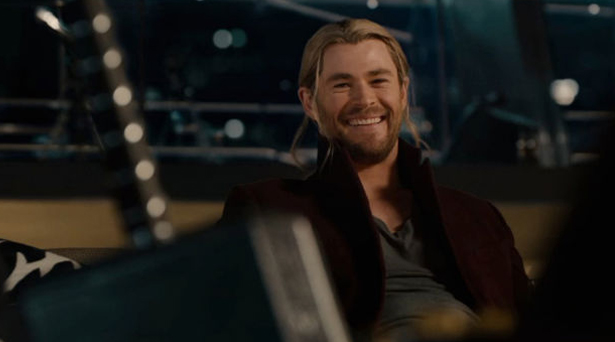 In 2015’s Avengers: Age of Ultron, after the Avengers had successfully raided Baron Wolfgang von Strucker’s HYDRA base and ceased possession of the Mind Stone sceptre used by Loki in the first Avengers movie, they decided to hold a party at their tower headquarters.

After their guests had departed, they all sat around having a few more drinks and chatting, when they decided to test their worthiness of wielding Thor’s hammer Mjolnir.

Tony Stark, James Rhodes, Clint Barton, Bruce Banner and Steve Rogers all took their turns – with only Rogers even slightly budging it and making Thor display a concerned look in the process – but none of them actually could. They had their own reasons for their inability to do so (“it’s a trick”, “whoever is carrying Thor’s fingerprints” etc), but Thor gave them the true reason by saying “you’re all not worthy!”

Vision hands Mjolnir over to Thor

When Ultron attempted to create the perfect body for himself using the Regeneration Cradle, he inadvertently ended up creating a powerful new hero.

A mixture of living tissue and the nigh-indestructible metal vibranium, Vision – who also possessed the Mind Gem and an artificial intelligence based on JARVIS – was brought to life with a massive bolt of lightning produced by Mjolnir.

When he awakened, he was disorientated and initially believed the surrounding Avengers to be hostile. He attacked Thor, before coming to his senses and explaining that he was pro-life, unlike Ultron, and insisted that he and the Avengers head to Sokovia to stop the evil robot. He was aware that the Avengers might not trust him, but he alleviated those fears without even knowing it by casually handing Mjolnir back to Thor, proving himself to be worthy of its power and a force of goodness. Cue lots of shock! 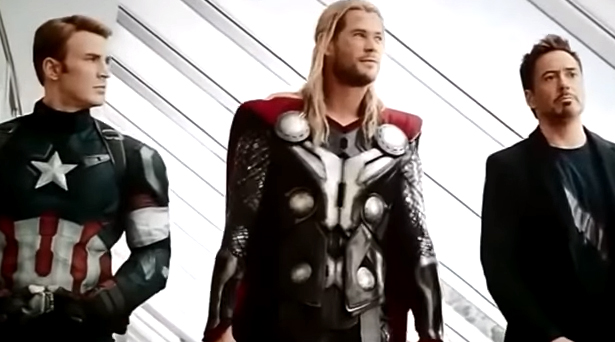 At the end of 2015’s Avengers: Age of Ultron, a humorous conversation takes place between Avengers members Captain America, Thor and Tony Stark, just prior to the heroic trio temporarily parting ways.

They’re discussing their new ally the Vision and his ability to lift Mjolnir, with neither Cap nor Stark convinced that he’s actually worthy of it, because of the fact that he’s an artificial intelligence. Thor is convinced, however, and says that he is fine with the fact that Vision possesses the Mind Stone, due to the fact he can wield his war-hammer.

Cap humorously compares him to an elevator, saying that if you put Mjolnir inside one, it would still go up, ending the point by saying “elevator’s not worthy!”

What do you think? Are these the best moments involving Mjolnir in the Marvel Cinematic Universe? Can you think of any better ones? Have your say below! 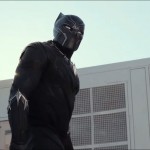 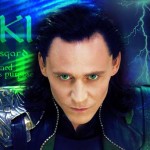