10 Items To Consider for the Perfect Joker Cosplay 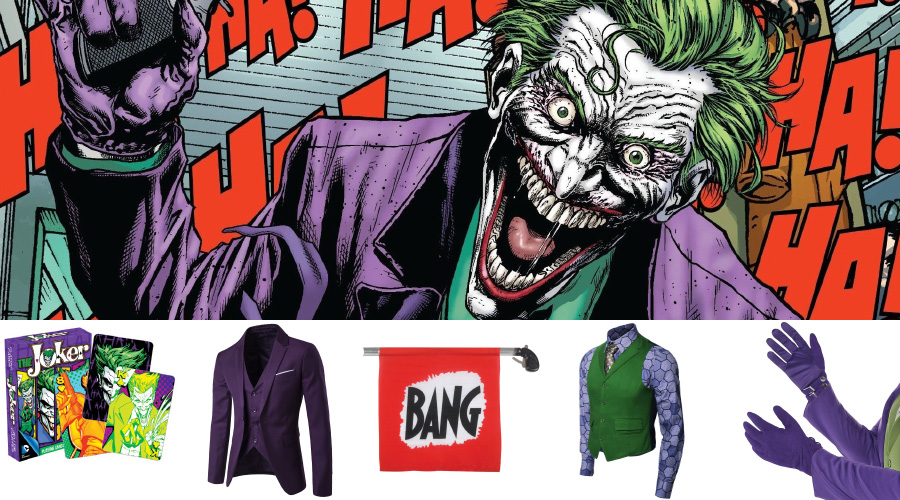 Halloween is fast approaching and, if it’s anything like recent Halloweens, a lot of people will be wanting to dress as the Joker – especially with the new Joker movie just around the corner.

If you’re one of those people, we want to help you out by suggesting some products to purchase to create the perfect Joker cosplay/fancy dress.

We’ll be taking influence mainly from the best live action Joker to date – that of Heath Ledger in 2008’s The Dark Knight – while mixing in some of the more popular accessories utilised by the character in the comic books.

In other words, there’ll be no teeth grills or temporary forehead tattoos here. We want to make you look GOOD, so there’ll be no expense spared here – don’t expect a list full of cheap, poor quality stuff!

Let’s get into it…

Okay, let’s start as we mean to go on with the Joker’s most prominent and striking item – his suit.

We don’t want this to look like cheap fancy dress – we’re helping you to cosplay properly here – so this is a bona fide, smart, slim fit purple suit that will really make you look the part as the Clown Prince of Gotham City.

It’s actually a three-piece set, as it comes with a waistcoat of the same colour – and while you’ll soon discover that you won’t be needing the purple waistcoat for your Joker cosplay, it’ll do you no harm to own it!

This right here is the reason you won’t be needing the purple waistcoat that came with the suit we just showed you – because it’s a green waistcoat like the one Heath Ledger’s Joker wore in The Dark Knight.

This item also comes with a patterned shirt and tie that are very reminiscent of the ones seen in that very same movie – and the ensemble, together with the suit, will make you look both dapper and psychotic in equal measure!

At this point, you’re already WELL on your way to looking like the Joker, so let’s continue with some of the more intricate details…

The finishing touches to your Joker clothing come in the form of these rather exquisite purple gloves.

They’re the perfect complement to your suit, waistcoat, shirt and tie and are designed to look exactly like the ones worn by Heath Ledger’s Joker in The Dark Knight.

They’re well-made and come with two buckled straps at the wrist, as well as topstitching details – and the one size they come in should fit pretty much all adults and older teenagers.

Just don’t take advantage of the fact they hide your fingerprints by going on a crime spree like the Joker himself would!

Now, obviously you can’t go around with your normal everyday face when you’re cosplaying as the Joker – you don’t look anywhere near crazy enough for that – so let’s fix the problem with this item.

It’s a Joker makeup kit – specifically, it’s a kit put together with transforming you into Heath Ledger’s Joker in mind – and it will certainly do the job you need it to do.

Everything in the pack is water washable and it should be enough to easily turn yourself into the Clown Prince of Crime.

If your hair isn’t long enough to resemble the Joker’s – or if you simply don’t want to apply a makeup product to your precious locks – then the next best thing you can do is purchase this wig for your cosplay.

It’s designed to look just like the Joker’s hair in The Dark Knight and is undoubtedly amongst the best examples on sale today (seriously, some of them are terrible – especially the ones made to look like Jared Leto’s Joker’s hair from Suicide Squad).

It might not look quite as good as if you styled your own hair like the Joker, but it’s certainly as near as dammit.

Okay, it’s time to start accessorising, because the Joker is known for carrying around certain things – one of which is, of course, his calling card.

But rather than just carry one single Joker card around with you, why not carry this whole deck of Joker-themed cards (which, of course, does contain a couple of Jokers anyway)?

You could maybe perform a few card tricks, use them as projectile weapons like the Joker has been known to do (we are NOT encouraging this), or smoothly hand one over to a lucky recipient with your phone number on it if you’re at a party (again, don’t blame us if that goes horribly wrong).

Now we’re getting to the good stuff! The fun stuff! The utterly silly stuff!

The Joker loves a prank – even if it is just in the form of a silly toy – and this product definitely falls into that category!

It’s a squirt prank kit containing a variety of joke items that will let you trick people whilst in-character as Batman’s arch-nemesis.

You could, for example, place the squirty flower on your suit jacket and soak your friends – just promise us you won’t fill it with a toxin or an acid like the Joker would, okay?! (We know you’re not that stupid really)

More silly tricks now – and this time it’s one of the Joker’s all time favourites. Yes, it’s the classic hand buzzer.

If you’re not familiar with the concept, the hand buzzer is held in your hand when you go to shake hands with somebody. Once it’s wound up (no need for batteries) and attached to your finger, it will deliver a shock to the person who’s shaking your hand, in the form of a vibration and a loud noise.

When the Joker does it, his buzzers have more of a kick and tend to hurt or incapacitate the person on the receiving end. Thankfully, yours should just startle them and make them laugh!

When you’re dressed as the Joker, you’re undoubtedly going to be posing for a lot of photographs – and this “BANG” gun with a flag is ideal for that scenario.

It should be noted that it doesn’t actually fire – it’s just a prop, specifically made for use in photographs – so don’t expect to pull the trigger and have the flag come out!

Yeah, we know that’s a little boring in comparison to a working model but, in this day and age, common sense dictates that you really don’t want to be carrying anything around that looks remotely like a real gun!

This high-grade resin clown mask would really take your Joker outfit to the next level.

It’s a replica from that scene at the start of The Dark Knight, when the Joker and his henchmen robbed a Gotham City bank in a school bus.

In said scene, the Joker took his clown mask off to reveal his makeup underneath – and if you were to do that, it would add a new layer (quite literally) to your cosplay.

Unlike most of the other masks like this on the market, this is great quality and looks exactly like the picture above – and its price reflects that, but it’s well worth it, assuming you actually want to do your costume justice!

Do you think these items make for the perfect Joker cosplay outfit? What else would you suggest? Let us know! 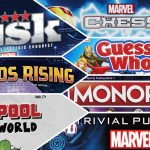