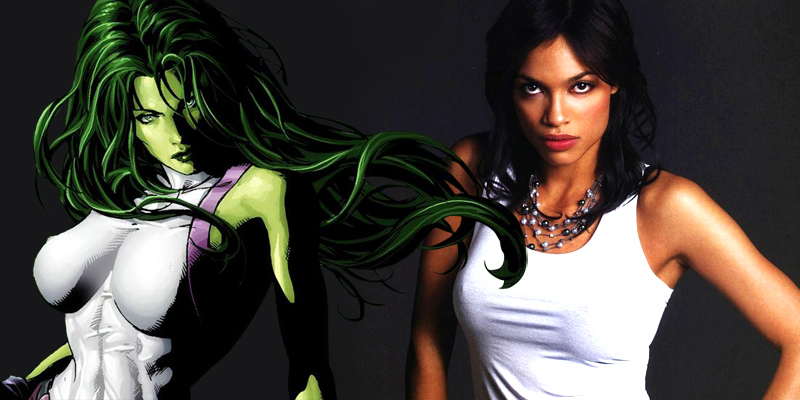 Rosario Dawson might be familiar to us as Claire Temple in the Netflix portion of the Marvel Cinematic Universe, but there is another Marvel Comics character that she would love to play. In response to a fan's comment on Twitter, the actress expressed her desire to play none other than Jennifer Walters, aka She-Hulk!

Would be honored to assume the responsibility…! https://t.co/9AWic66aPt

Walters was created by Stan Lee and John Buscema. She was introduced in the February 1980 issue Savage She-Hulk #1. When she was shot by the operatives of crime boss Nicholas Trask, she lost enough blood to be in need of an emergency transfusion. Since no other donors with Walters' blood type could be found, her cousin Bruce Banner, aka the Hulk, was forced to provide his own blood to save her life.

When the crooks attempted to kill her at the hospital, Banner's radioactive blood and her anger combined to set off her transformation into the green-skinned She-Hulk. Her powers were almost the same as her cousin’s, but at a reduced level.

She-Hulk has appeared in several animated ventures to date, but is yet to make her live-action debut. A few attempts were made back in the late 1980s and early 1990s to introduce She-Hulk in live-action media, but that never happened.

Whether the MCU launches the character remains to be seen, but to be honest, it seems unlikely to happen in the near future, as we haven't heard about any such plans until now. And even if they do introduce She-Hulk into the MCU, it doesn't seem like they would consider Rosario Dawson for the role.

Dawson has served as Claire Temple in Daredevil (both seasons), Jessica Jones, and Luke Cage. She’s also been confirmed for the next two Marvel/Netflix shows, Iron Fist and The Defenders. But we can’t forget that stars like Alfre Woodard and Kenneth Choi each landed roles as two separate characters in the MCU in the past.