If you like the Marvel Universe in any capacity, you really owe a debt of utmost gratitude to the Fantastic Four. Without Stan Lee's (at the time) naturalistic dialogue and (at the time) realistic character work, and Jack Kirby's jaw dropping, groundbreakingly perfect artwork, we would not have a Marvel Universe today. But don't let their name fool you, the FF have had a lot of members. Fantastic Four means "four at a time", not "four ever". So who are the best heroes to ever slap a four on their chests? 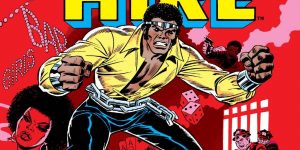 Yep, that's right, the star of the most recent Netflix series (THE MOST RECENT NETFLIX SERIES; THAT OTHER ONE NEVER HAPPENED) was a member of the good ol' Fantastic Four.

He was brought in for a very short stretch of time to replace the Thing, who had temporarily lost his powers. And he's a good pick for the new heavy of the group. Especially because his 70s yellow puffy shirt and tiara make up one of my favorite goofy old school comic book outfits. It's just so earnestly great.

Fun fact, though: This was not the first time the FF and Cage ran into each other. No, that happened when Dr. Doom hired Cage for a job and then refused to pay him. So Cage stole a fantasticar and flew to Latvaria, because he was gonna get his two hundred dollars, by God. You do not screw Luke Cage.

He will mess you up. 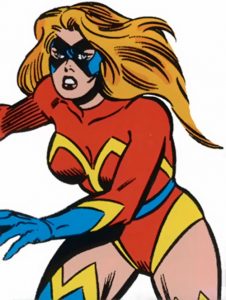 No, not the one you're thinking of. Yeah, the Carol Danvers one? The one going by Captain Marvel now, the one who has a movie coming out in which she's played by Brie Larson? Yeah. Not her.

Sharon Ventura was a military brat who eventually found work as a movie stunt person. She was a notable part of the Thunderiders motorcycle stunt squad, where she met Ben Grimm, aka The Thing, and the two shared unmistakable chemistry. Ventura wanted to get closer to Grimm, so she endured the process of being augmented with super powers so she could go into Unlimited Class Wrestling alongside Ben. However, things weren't permanently fixed for Sharon, as she and Ben were assaulted by cosmic rays after she got herself into the Fantastic Four.

This caused Ben to mutate even further, and he became a more horrendous version of The Thing, while Sharon became a female version of his first-ever form as The Thing. She decided to call herself She-Thing. After some time with the team, she was replaced with a Skrull impersonator, turned evil, and got thrown in prison. Complicated life for poor not-Carol Danvers. 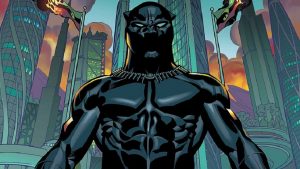 As far as "dudes who should have a place in the Fantastic Four" go, you can't do much better than "dude who first appeared in Fantastic Four."

T'Challa was ruler of Wakanda, a huge, hidden, super-technologically-advanced society mysteriously buried in the heart of Africa. His stewardship of the country also granted him ownership of the mantle of"¦Black Panther, a superheroic identity with super powers, great tech, and a badass costume. The Panther and his wife Storm were welcomed into the FF as replacements for Reed Richards and Susan Storm-Richards when the latter two had to leave the team to reconcile after facing personal and relationship difficulties during Civil War.

They may not have lasted super long on the team, but they served as a good patriarch and matriarch replacement for the super family.

Plus, with a Black Panther movie coming soon, it'd be good to remind everyone that the Avengers wasn’t the only superteam he was a part of. 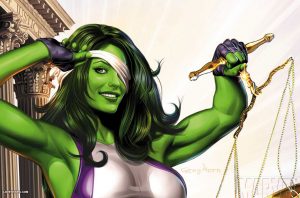 Oh, Secret Wars, you were a really fun, really great comic book event, and you left many changes in your wake.

And, while the most famous change was Spider-Man’s nifty new black costume, I'd personally argue that the second most famous one was having She-Hulk replace the Thing in the Fantastic Four. She's one of the longest lasting non-original Four members, and was even brought back for the second team when Marvel Now! split off Fantastic Four and FF into separate books.

While Ben Grimm tooled around on Battleworld after Secret Wars, the Fantastic Four needed a heavy hitter, and no one was a better call than Jennifer Walters. She was strong, she was smart (I mean, she is a lawyer, after all), and she was another woman on the FF team, which is cool. I've always been a big Shulkie fan, probably owing to Dan Slott's excellent run on the character from the mid 2000s and the Charles Soule run from Marvel Now!

All in all, an excellent addition to the team. 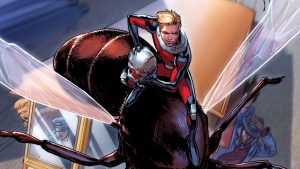 Oh, Scott Lang, how much I love you as a character.

Scott was drafted into the Fantastic Four to replace a temporarily-thought-dead Reed Richards. Scott bounced around a bunch over the years, eventually winding up with The Avengers. At that point, he died when former teammate and current zombie bomb (z-bomb-bie?) Jack of Hearts exploded him.

Scott's daughter, Cassie Lang, eventually went back in time and saved Scott from being killed. Dr. Doom then killed her, but eventually she came back, too. Scott, now newly no longer a corpse, was asked to be a part of the Fantastic Four's Four-Minute Squad when the original FF went on a trip.

Obviously, the trip lasted a lot longer than four minutes, and Scott's FF team (including himself, She-Hulk, Medusa, and Darla Deering, aka Ms. Thing) watched over the Future Foundation kids and fought crime and cosmic monsters for the duration of the Marvel Now FF run. 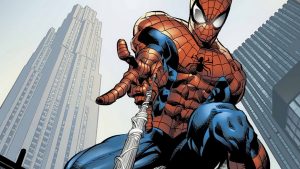 Look, there was never going to be anyone else in the fifth slot.

The most deserving member of the non-original Fantastic Four is Peter Parker, the amazing, spectacular…uh…web of(?) Spider-Man. In fact, it was in his second appearance ever that Spider-Man first tried to join the Fantastic Four.

In Amazing Spider-Man #1, Parker decided to prove he should be in the FF by"¦breaking into their house and attacking them, like an a-hole. Shockingly, this didn't work. Years later, when the original FF were unavailable, Parker was brought in as a member of the New Fantastic Four, alongside Hulk, Wolverine, and Ghost Rider.

This was pretty fun, but it didn't last long. He got his second chance when The Human Torch died and the Fantastic Four revamped themselves as the Future Foundation. Spider-Man was Johnny Storm's handpicked successor to replace him. And how much more cred can you get? 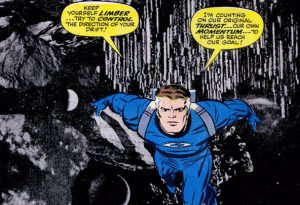 Here’s where I get controversial, maybe. Trying to rank the original Fantastic Four members is like trying to rank the Beatles, only harder, because Ringo's easy to place (Also, if you’re curious: Paul, George, John, Ringo).

But Reed Richards is a character I really and truly love. It's just that he's the least of that original team, mostly due to his tendency to act like a raging jerk-heel whenever he forgets to shave.

Reed is easily the most brilliant comic book character of all time, so being short with his teammates on occasion is understandable, if a little annoying. It's hard being the smartest guy in the room. Not that I'd know.

But, hey, Reed also has a moment in the first issue of Waid and Wieringo's Fantastic Four run that absolutely destroys me emotionally and makes me understand his character enough that placing him above every non-original FF member was an easy call. 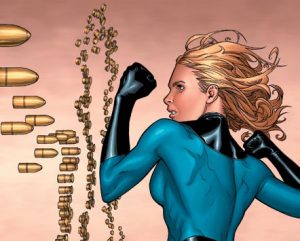 Sue Storm is easily the founding mother of the Marvel Universe.

I think she gets a lot less respect than she's due. She gets flack for being "boring" or "naggy". But in reality, she's the responsible one. Ben smashes things whenever he gets pissed, Johnny's a literal hothead, and Reed has accidentally almost ended all of space time and reality like five times. Sue has to be the mother figure, a role she filled especially well after she had her first kid. I always loved Sue as a character.

She has her wry moments, and is capable of being a crazy powerful badass, while still being a smart, capable family member. She's one of the most well-adjusted superheroes of all time, and also that one S.H.I.E.L.D. issue where she goes all black ops is really fantastic.

Not many heroes can successfully make the transition to wife, and then mother, without losing any of their agency, but Susan Storm-Richards does it easily. 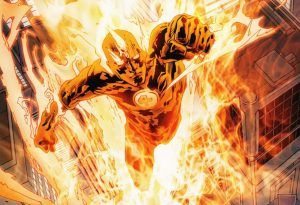 The group's youngest member is a dude I’ve always loved reading about, whether in Fantastic Four, his own multiple mini-series, or his numerous guest appearances. Hand me literally any Spider-Man/Human Torch crossover, and you can call me a happy camper.

To me, Torch has always seemed like the most independent of the Fantastic Four (a fact boosted by the fact that he's an Uncanny Avenger right now) and his habit of popping up in other books solidifies that. He's also a character we've watched grow up over the years, going from a literal teenager, to a slacker, to an adult, and to a superhero. Johnny is the kid of the Four, and his interactions with the others shows it. He's confused by Reed's technobabble. He's annoyed by Sue's older sisterly mothering impulses. He gets his amusement by playing teenage pranks on the Thing.

But he isn't the best member of the Four. No, that honor goes to"¦ 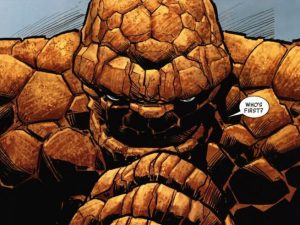 Who else was it gonna be, other than the ever-loving blue-eyed Thing?

Ben Grimm is one of the best comic book characters of all time. He's tragic and funny and inspiring and heroic.

He's never gonna give up. He's "just too stupid"¦and ugly"¦ta know when ta quit!" Like, This Man This Monster is one of the best comic books of all time, it has an all-time fantastic visual design…it would be easier for me to name things I DON'T like about The Thing. Okay, here goes. He has been in some terrible movies. That's it.

Dude was a Guardian of the Galaxy. And a New Avenger. He spent some time running around in space as a human. And then he was super-mutated and all sharp. And then sometimes he had a robot suit. He's been cured and un-cured and made worse and everything else, over and over again. He's easily the most mutable member of the Fantastic Four. And the best. It isn't even close.

And there you have it, the ten best members of the Fantastic Four. Told you there were more than you thought. 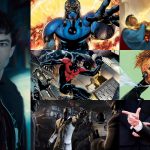 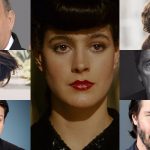