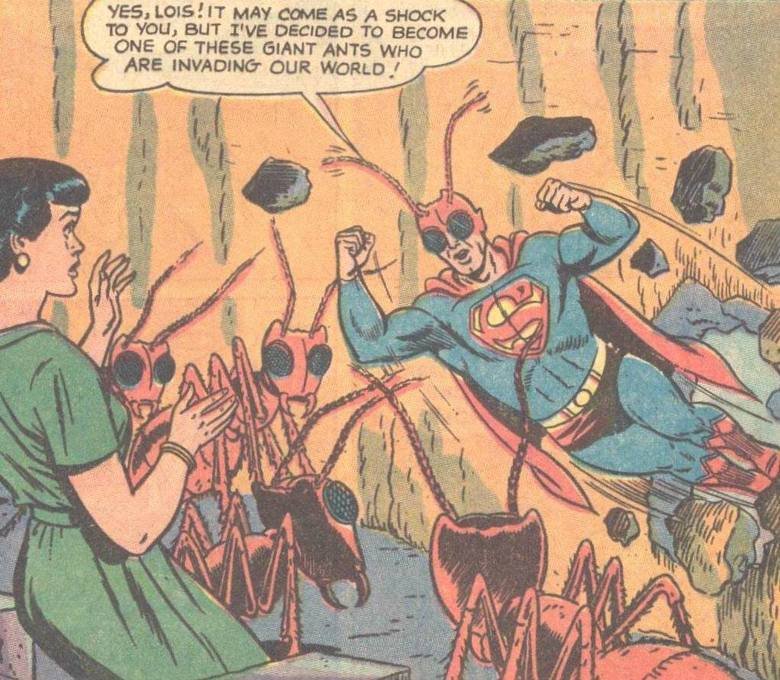 Ah, the Silver Age, a peak time in comic book history. DC Comics was at peak wackiness, and Marvel was literally revolutionizing superheroes as we knew them. But if I had to pick the most fun comic series of the Silver Age"¦okay, I'd pick The Flash. But if I had to pick the WEIRDEST comic series of the Silver Age, I'd have to pick the Superman trifecta of Superman, Superboy, and Action Comics. Those are some strange, strange, stories. From lions to rainbows to space-mad apes, Silver Age Superman comics sure knew how to have fun. Let's take a look at them, shall we? 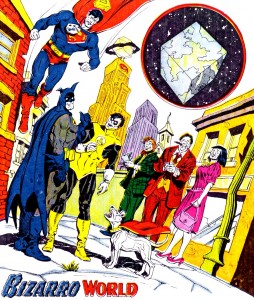 10. Bizarro World and any time it shows up

Bizarro is a polarizing character. Some people like him a whole bunch and have a soft spot for the character. Others absolutely hate the hell out of him in every context. I honestly fall somewhere in the middle. I like him by himself but whenever multiple Bizarros and their backwards-talking planet show up, I get a headache and have to put the comic down. So when Bizarro and Bizarro Lois Lane leave earth and find a new planet they name Htrae, it becomes the first Bizarro World.

Bizarro builds a duplication device, because building a cloning machine is apparently a lot easier than mastering simple sentence structure. The new bunch of Bizarros comes up with the Bizarro Code, proclaiming, "Us do opposite of all Earthly things! Us hate beauty! Us love ugliness! Is big crime to make anything perfect on Bizarro World!” To be fair, that's less a "code" and more "a bunch of ranting proclamations", but whatever floats your boat. 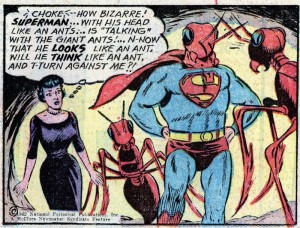 Let's talk Red Kryptonite!! Most everyone knows what green kryptonite does (Hint: It makes Superman super dead), but not many know about the various other kryptonite colors and what they do. Red Kryptonite is my favorite, being the weirdest one of all. Red K mutates Superman in inconsistent ways, all with different effects, based on whatever the writer wants them to be.

In the issue we're gonna talk about, giant evil space ants show up on earth (it is a Tuesday in the DC Universe, after all) and kidnap Lois Lane. Because Lois is just the most kidnappable human being in the entire history of kidnapping.

Superman flies through a Red K cloud and mutates, giving himself an ant head. Because this is a comic book. He then flies back and talks to the ants who, it turns out, are trying to warn earth about nuclear destruction, because they care, for some reason.

Superman listens to some giant ants PSA him a bunch and then goes to talk to the UN. The giant ants repair their spaceship and go home.

That is a sentence I just typed. 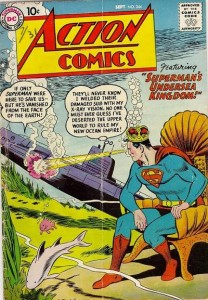 8. That time Superman went underwater and made himself a throne and a crown

Ok, fine, technically the throne and crown thing only happened on the cover, but I still love how completely and utterly bored he looks by having to save people. What, Superman, do you and your jaunty crown have better things to do underwater? Anyway, the actual content of the issue revolves around Superman finding two alien merpeople and leaving the surface to live with them at the bottom of the sea, completely and utterly ignoring/hiding from the surface dwellers panicking about his absence.

Superman then poisons the sea with oversalting to trick the aliens into leaving, because if there was one thing Silver Age Superman was just all about, it was tricking people all the gosh-darn time. Silver Age Superman only knew two ways to solve problems: either A: trust-shattering levels of lying and deceit, or B: Punching people and animals right in their stupid faces. It was a good time to be Superman. 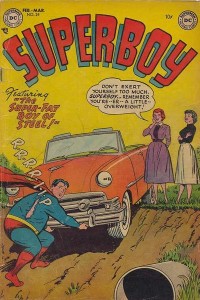 7. That time Superboy got all fat and stuff

So, in the Silver Age, DC had a thing for producing issues in which all their characters got super fat. There's that issue of the Flash where he gets fat, there's an issue of Superman where the same happens, and then there's this issue of Superboy.

In the issue, Superboy, who has been away for two weeks, returns to Smallville, only to discover something shocking! All the students have become super fat for no reason, including Clark's sweetheart Lana Lang. The next day, Superboy swells up like a balloon, causing Lana to get suspicious, because if Clark is fat and Superboy is fat, then CLARK MUST BE SUPERBOY! Superboy eventually discovers that the entire town has been drinking milk tainted with growth formula, thanks to some stupid cows who ate tainted crops. Superboy fixes the problem and (say it with me now) tricks Lana into doubting that he and Clark are the same person.

OH! Totally forgot, there's also an issue of Brave & the Bold in which Batman gets real fat. ADD IT TO THE LIST!!! 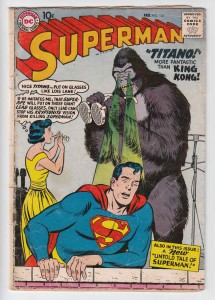 6. Titano, or Superman punches an ape right in the face

People have a hard time coming up with villains to fight Superman. All of his enemies have to be the smartest person ever or the strongest thing in the entire galaxy to even pose a threat. Also, most of them have something to do with kryptonite. So every once in a while, a weird-as-hell villain is generated. This was the case with Titano, the giant ape-monster who shoots kryptonite lasers from his eyes.

Now, Titano is not an evil, super-intelligent ape like Grodd, nor is he an ape with an evil man's brain like the Ultra-Humanite. No, he's just a normal ape, who in his debut was actually dubbed one of the world's most intelligent apes, driven mad by space radiation. And Superman decides on multiple occasions that the best way to deal with this giant, space-mad creature is just to punch it right in the face. I mean, I know Superman can be a jerk sometimes, but geez. 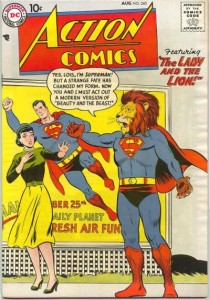 Yes, this is a comic book where Superman has been turned into a lion man. It's probably the defining image of the silver age, and it goes a long way toward explaining why old-school Superman comics are so gosh-darn fun to read. Wackiness is GREAT FUN. So, a story in which a descendant of the mythological being Circe gives Superman mineral water that turns him into a lion man because he won't marry her is kind of my favorite thing.

He flies around helping people while hiding his lion-face, even though this is the DC Universe and stuff like this happens every other day or so. Superman eventually heads back to the Fortress of Solitude and checks the library, finding a book that explains to him how to create an antidote for his lion-head. Because Superman has a vast and extensive library of books about curing Lion-heads, apparently. 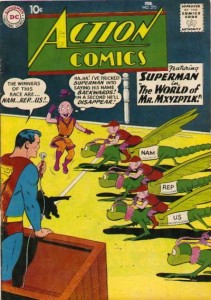 Mr. Mxyzptlk is one of those classic silver age Superman villains who struggles to exist outside that context. Mxyzptlk was an all-powerful imp who used his powers to annoy Superman a bunch, only leaving him alone if Superman could trick Mxyzptlk into saying his own name backwards.

In Action Comics #273, however, Superman decides to turn the tables on Mxyzptlk and be a massive jerkface right back at him. Superman travels to Mxyzptlk's home, the Fifth Dimension, and finds that the imp is running for mayor. Superman systematically ruins Mxyzptlk's mayoral campaign at every single turn until Mxyzptlk has had enough. He decides to make Superman have to go home by tricking him into saying "Namrepus" ("Superman" backwards), and actually tricks the Man of Steel into doing so.

Unfortunately, Superman's real name is not "Superman" so it doesn't work. Superman sticks around until Mxyzptlk has definitively lost the election, and then leaves of his own accord, satisfied he has ruined Mxyzptlk's life for the time being. Because Superman is Superman, and Superman is a jerk. 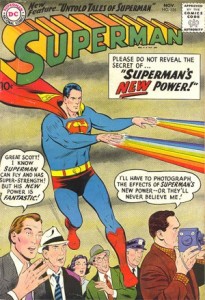 People mock the Silver Age of comics all the time for being "goofy" or "dumb", but it is home to some of the most fun and charming comics and images you're ever going to find.  I mean come on. Look at that. That is a picture of Superman. Shooting rainbows. From his HANDS. If you can look at that and not have a smile start to slowly spread across your face, then you are dead inside, sir or madam. That image isn't just the peak of DC Comics as a whole, it's the peak of human creativity. 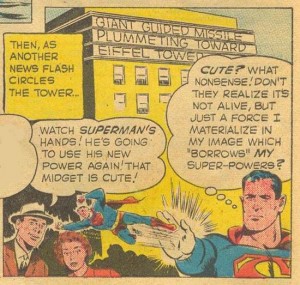 So what could be better than Rainbow Hands Superman? The content of that comic book, of course! In the actual story, Superman gains a new power: the ability to shoot a tiny Superman out of his hand.

Yes, you did read that right. The tiny Superman gets all of Superman's powers, leaving regular-sized Superman to just sort of hang out while tiny Superman saves people. Everyone starts praising tiny Superman for his heroism, so of course normal Supes gets super jealous. He then does the most Silver Age Superman thing in the world: He plots the death of his tiny duplicate, because Metropolis is only big enough for ONE Superman and that Superman doesn't need to clothes shop in the children's department.

Of course, Normal Supes never gets the chance since tiny Superman sacrifices himself to save Metropolis, giving normal Superman all of his regular powers back. Pro Tip: This story is much more fun to read if you imagine tiny Superman's voice sounding all high-pitched and squeaky. 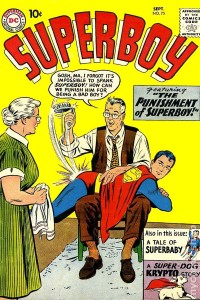 1. That time Superboy’s parents had to figure out how to punish him

This"¦ uh"¦ this is a weird one. I'm not quite sure how to write about it, but HERE GOES. And remember, this is a real comic book. In this issue of Superboy, Jonathan Kent wins a father of the year award and Clark reminisces about a time when Jonathan had to learn how to parent Clark and wacky hijinks ensue. We flashback to the past, where Clark is being a disobedient little Superboy. Jonathan tells him to chop a bunch of wood without using his superpowers because"¦ um"¦ not actually sure. Character building, maybe? Sure, let's go with that.

Clark absolutely refuses and Jonathan decides to punish him the old fashioned way. Unfortunetally, bending Clark over his knee and smacking him on the butt with a hairbrush does not work because he's Superboy. Although they do try hairbrush spankings at one point.

Hang on, I just need to go check and make sure I'm not writing about slash fiction by accident again.

Anyhoo, Jonathan and Martha decide to just leave Clark forever because he's a bad child and deserves to be abandoned, I guess? Clark is incredibly depressed until his parents return home, explaining that they didn't really leave forever, they were just punishing Clark. You know, emotionally!! That sounds super healthy. And explains a lot about Superman’s behavior in the rest of this list.

And with that, let's stop for now. I'm sure I could find ten MORE examples of Superman being a weird jerk in the fifties and sixties, but that'd make the ones I just listed less special. But if you get a chance, and you wanna read some incredibly strange but super-fun comics, pick up a Superman Showcase and have yourself a grand-old time.