Thor: Love And Thunder: Some Scenes Too Scary For A Family Movie

Actor Christian Bale explained that a lot of material in Thor: Love and Thunder were deemed too scary for family audiences.

With Thor: Love and Thunder’s July 8 release date around the corner, Christian Bale, who plays Gorr the God Butcher in the Marvel Cinematic Universe film, revealed in an interview that director Taika Waititi is “a funny bastard, and he did a lot funnier stuff than was allowed to be in the film, in my opinion.”

“But we must remember, we’re making a family-oriented film,” Bale added. “We did a lot of scarier stuff, and weirder, creepier stuff, as well.” He also mentioned that, while he got to enjoy working alongside MCU alums Peter Dinklage and Jeff Goldblum, neither actor made it into the final cut of the film. This information comes on the heels of news that Game of Thrones star Lena Headey was also cut from the film, and is being sued for $1.5 million by her U.K. agency, Troika, for allegedly withholding her earnings.

When it came to working with Waititi, Bale said that it was a dream come true and that he has high hopes for Love and Thunder. “[Waititi is] able to have this great sense of humor, but also wonderful sincerity, as well,” he said. “And it’s actually a really beautiful film, Love and Thunder, because it’s funny as hell, and it’s very moving.”

Thor: Love and Thunder is the ninth Marvel film to feature Thor and the fourth Thor standalone film. It takes place directly after Avengers: Endgame (2019), with Thor becoming increasingly disillusioned with the realities of being a superhero. He is forced to snap out of it, though, when the threat of Gorr the God Butcher spurs him into action along with allies Valkyrie, Korg, and Jane, who now wields the God of Thunder’s powers herself. 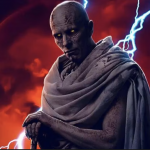 Upcoming Superhero Movies That Are Set To Blow Your Minds