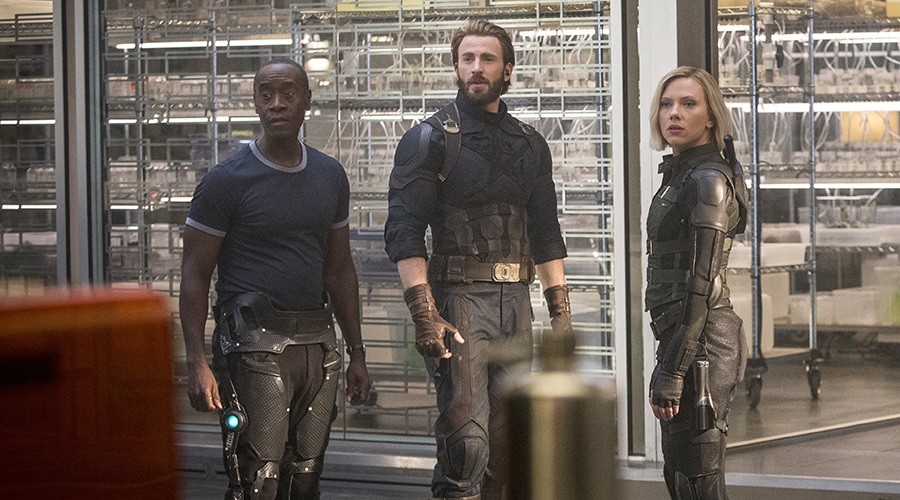 The first Avengers: Infinity War trailer revealed that a group of heroes will gather in Wakanda to fight Thanos and his army of alien invaders. A more recent scene description provides some details about how they all end up there.

During filming for the April 27, 2018 release, ComingSoon had the opportunity to visit the movie’s Atlanta set and watch a key scene. As it turned out, the scene was less than action-packed, but we think that fans will agree that it’s both interesting and entertaining.

The scene opens in Wakanda, as T'Challa (Chadwick Boseman), the Dora Milaje, and a number of citizens gather to greet some visitors who are disembarking from a Quinjet. This scene apparently fits into the movie’s timeline before the trailer scene in which the Wakandan king gives orders to evacuate the city, engage all defenses, and get a new shield for some guy with a beard.

That guy is Steve Rogers, aka Captain America (Chris Evans), and he happens to be the first person to exit the Quinjet. Black Widow, Falcon, Scarlet Witch, and Vision quickly follow. Paul Bettany's vibranium-made android clutches his mid-section as Elizabeth Olsen's Sokovian superhero helps him down the platform and across the landing pad. Based on a couple of quick flashes from the trailer, it's obvious that the Black Order caused Vision's injuries. The group continues on to Shuri's lab, bumping into Bucky Barnes, aka the Winter Soldier, on the way.

The group from the Quinjet also includes James Rhodes (Don Cheadle) and Bruce Banner (Mark Ruffalo). Rhodes has on a pair of leg braces from Stark Industries, and Banner has news of Thanos' arrival. According to Ruffalo:

Banner knows probably more about Thanos than anybody. And he's really trying to impress on everybody how dangerous he is. It's a little bit of a Chicken Little (scenario). He comes in screaming bloody murder"¦

In the next shot, Steve hugs his old pal Bucky for the first time in years, as Bucky quips, "So, little green men, huh?" Black Widow responds, "Not little, not green."

Banner is clearly uncertain how he should greet T'Challa. Just to be safe, he goes down on one knee. This is followed by this funny exchange between Falcon (Anthony Mackie) and Bucky:

Falcon: Are you gonna snap and kill someone if they say bologna sandwich?

The next exchange involves Captain America and T'Challa:

T'Challa: How big of an assault should we expect?

Cap: A pretty big one, sir.

T'Challa: Well, I have my King's Guard. The Dora Milaje"¦

The scene concludes as Falcon chimes in: "And a semi-stable, frozen, 100-year old man."

Share your thoughts on this Avengers: Infinity War scene, and stay tuned for the latest updates!