5 Comic Book Villains That YOU Could Easily Defeat 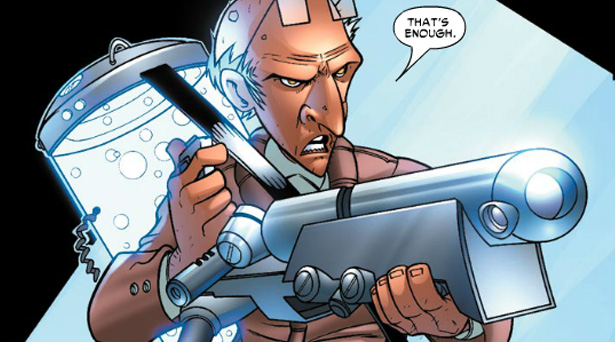 Some comic book villains truly are lame – and yes, we know they are often meant to be joke characters. However, they are still meant to be at least moderately threatening – at least to civilians, if not the heroes they go up against.

Worryingly, there are actually some villains in comic books that YOU – yes, YOU – could defeat!

In this article, we’ll take a look at some villains so inept, so weak, so clumsy and so useless that the average real-world human could defeat them with relative ease!

Here are five comic book villains that YOU could defeat (this is assuming they don’t have any assistance etc). 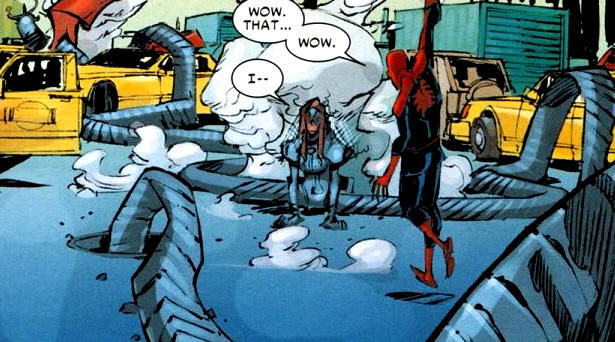 There have been a number of characters named Stilt-Man in Marvel Comics - Wilbur Day and two unnamed criminals – and none of them were exactly A-list. However, they were at least competent at the level they were operating.

And then came another unnamed individual – this time a female – going by the name Lady Stilt-Man.

Not only did she have a ridiculous name (surely it should just have been “Stilt-Lady”?), she was also considerably clumsier than her predecessors – to the extent that she often essentially defeated herself.

Through complete incompetence, during an encounter with Deadpool (who had removed said manhole cover) for example, she fell down a manhole cover and got stuck there.

So, essentially, all you need to do to defeat her is (easily) avoid her ridiculously clumsy attempts at attacking you, then run towards any kind of hole or uneven ground – she’ll defeat herself on your behalf. 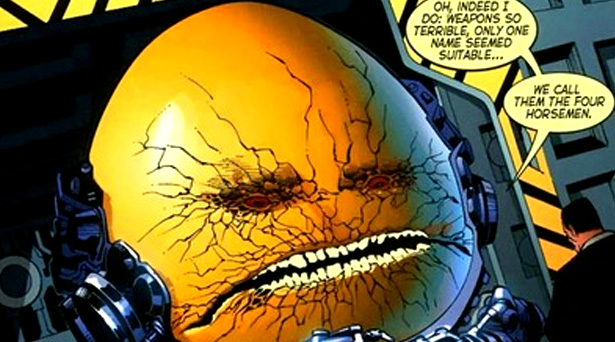 Chang Tzu AKA Egg-Fu is a DC Comics supervillain who is very good at making weapons – but that’s pretty much the extent of his worth.

There have been a number of characters called Egg-Fu in the DC universe, but it is the scientific master of Oolong Island, the one who has been employed as a weaponsmith by Intergang and the only one called Chang Tzu (as well as “nine thousand and nine” other supposedly “unmentionable” names) that we’re referring to here.

He does have some cybernetic enhancements – but they’re nothing to write home about and essentially amount to legs – and all you’d really have to do to defeat him is smash his already cracked egg-like exterior with a large spoon (you know, like you did with dippy eggs as a kid!)!

You might have to avoid his jagged teeth, as a bite might sting a little, but his vulnerable head would be easy to injure badly. 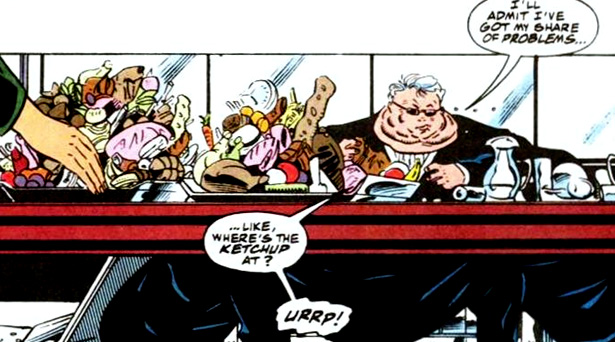 The Slug is a villain from the pages of Marvel Comics who has most often clashed with Spider-Man and Captain America. His real name is Ulysses X. Lugman and he’s a businessman, drug lord and leader of organised crime.

He came to the attention of the heroes of the Marvel universe when he was revealed to be Kingpin’s Miami connection. His power over his henchman comes from money – nothing more. He isn’t at all capable of dishing out any punishment to them, as he is completely physically incapable.

His gifted intellect and criminal genius would be no use against anyone reading this who is even remotely capable of defending themselves.

So fat is Slug, he can’t even stand up under his own weight and can only get around on high-tech hovercrafts and heavy-duty electric wheelchairs. If you can avoid getting stuck under his massive flabby rolls (which shouldn’t be difficult), you can defeat him by just hitting him over and over again! There’s no way he could retaliate. 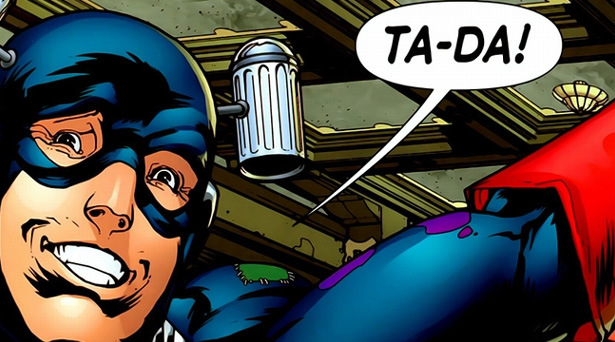 The concept of the Condiment King first appeared in Batman: The Animated Series, as a man named Buddy Standler, before appearing in DC Comics as Mitchell Mayo.

He is a Batman villain whose sole “power” is the ability to utilise condiments in various ways – such as mixing them to create combinations that can cause anaphylactic shock, which he fires from his condiment guns – but he is otherwise a fairly wimpy and feeble man.

His condiments of choice include ketchup, mustard, Tabasco sauce and vinegar and, assuming you can dodge his moderately dangerous mixtures – which shouldn’t be hard, as he’s fairly inept – you could probably beat him down with relative ease!

He did once have his condiment gun loaded with dangerous acidic vinegar by Professor Milo, but that’s not his standard supply.

He likes to use condiment-based puns during confrontations (“Yo WASSSAAAAAAAAAABI!”), but they won’t save him from being beaten up by anyone who is remotely physically able. 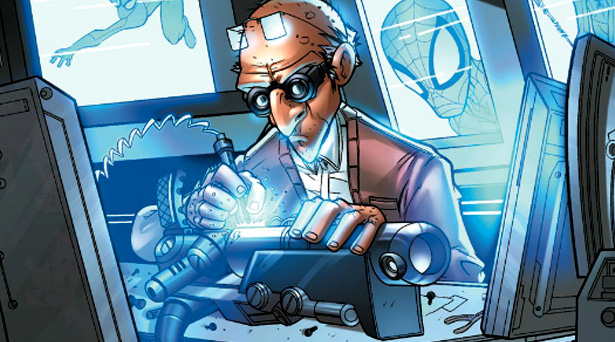 The Tinkerer AKA Phineas Mason is a Marvel Comics engineering genius whose intellect is such that it is bordering on superhuman.

He has worked for the likes of Kingpin, Mysterio, Scorpion, Rocket Racer, Hammerhead, Black Cat, Jack O’Lantern, Beetle and Vulture and has fallen foul of the likes of Spider-Man, Punisher and S.H.I.E.L.D. as a result.

However, when all is said and done, he’s nothing more than a feeble old man.

If you were to discover he had developed a disliking for you and knew where he was, you could literally just walk up to him and stop him. Although we don’t encourage hurting an old man (seriously, don’t!), you could easily restrain him while you called the police and told them to come and arrest him.

All you would have to worry about is the possibility of him having one of his completed dangerous inventions on his person but, even if he did, he’s frail and slow so you could probably take it off him before he managed to use it.

What do you think? Could you really beat these terrible villains? Which other villains could the average person defeat with ease? Have your say below.