Marvel Zombies is Back! 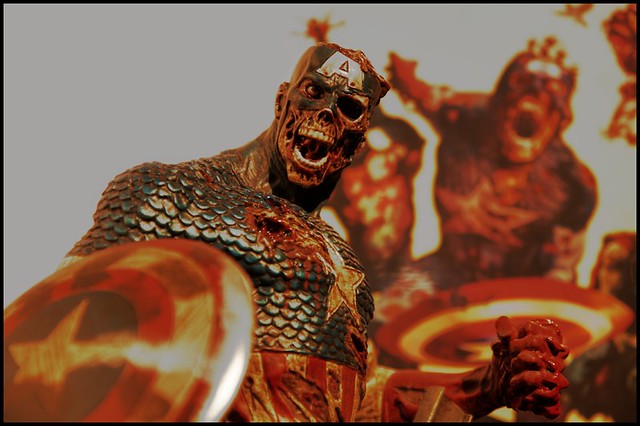 It's both a good and bad day to be a fan of zombies in comics. Just as Robert Kirkman dropped a bombshell on everyone and announced, very surprisingly, that The Walking Dead will end with this week's issue #193, Marvel Comics decided to drop their own bombshell, revealing that Marvel Zombies is making a comeback! The announcement was made by Marvel on social media but, for the time being, we're tragically short on information. Check out the tweet below.

As we can see, a cover for a new series is revealed, which features flesh-eating versions of Captain America, Deadpool and Wolverine. The cover art comes from Inhyuk Lee and, beyond that, there isn't much else to go on, save for the October 2019 tease tagline featured on the image.

"The dead will walk again"

Marvel Zombies takes place on Earth 2149 within the Marvel Multiverse, so the events depicted in the books don't affect the main continuity. In any event, the series first launched in 2005 from writer Robert Kirkman, not long after The Walking Dead started to take off. The five-issue series proved to be a huge hit. For those who may not be familiar, here's a synopsis.

"Enter a world overrun by the flesh-eating monsters known as the Marvel Zombies! Spider-Man, Captain America, Iron Man, Wolverine and all your favorite heroes have fallen prey to an unstoppable virus, and the world’s only savior may be none other than Magneto! Torn from the pages of Ultimate Fantastic Four! On an Earth shockingly similar to the Marvel Universe’s, an alien virus has mutated all of the world’s greatest super heroes into flesh-eating monsters! It took them only hours to destroy life as we know it – but what happens when they run out of humans to eat?!? Follow their search for more food-and witness the arrival of the Silver Surfer!"

Here's what we know for sure. Zombies, thanks to shows like The Walking Dead, Fear the Walking Dead and iZombie, are as present as ever in the pop culture landscape. We also know that Marvel Comics loves to bring back popular titles every few years, if at all possible, in order to capitalize on some easy buzz. That said, they typically deliver in the quality department with offerings such as these.

All we can do right now is speculate. Will Robert Kirkman make a return to Marvel Comics? What on Earth (or possibly not Earth) are the zombie versions of these beloved heroes going to be getting up to this time around? Are you planning on picking this up when it hits stands this fall? Sound off in the comments! Also, be sure to check out the full version of the cover below.