Hayley Atwell’s character died during the Civil War, but the Marvel Cinematic Universe may not be done with the actress yet. She just posted a new pic on Instagram that shows her with facial tracking dots that are used for motion capture. The photo could be a tease for a different project, but none of her future films require this kind of CGI work.

Atwell’s first MCU appearance was as Peggy Carter in Captain America: The First Avengers. The character was a big hit with the fans, so she reprised the role in her own TV show, Agent Carter. Check out the pic below:

Since Atwell did die in Captain America: Civil War, we can assume that her Avengers 4 role will put her in a flashback sequence. Alternatively, she may have some help from Doctor Strange (the last we heard, he still has the Time Stone). However, Thanos might also have something to do with Peggy Carter's return, especially if he does get his big hands on all of the Infinity Stones and gains god-like powers.

Then again, the pic could be from the Avengers: Infinity War set. A couple of days ago, we learned that the movie was seeking actors to play secretaries and engineers in a '60s set piece. That would also explain the tracking dots in the shot of Atwell.

Keep in mind that all of this is just speculation. If Avengers: Infinity War is to be released in May 2018, the still-untitled Avengers 4 will come out two years later. So we might have a bit of a wait before we hear anything official.

Marvel has used CGI to de-age or age a number of characters. Most recently, the technique was used with Tony Stark (Robert Downey, Jr.) in Captain America: Civil War. 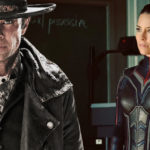 Ant-Man and the Wasp Pics: Evangeline Lilly Wears The Wasp’s Helmet; Walton Goggins Pops Up, Too!
Next Post 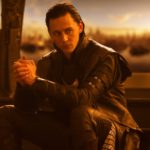 Ragnarok Rumor: A-Lister to Debut in the MCU?