10 Movies Based On Comics To Rival Infinity War In Scale 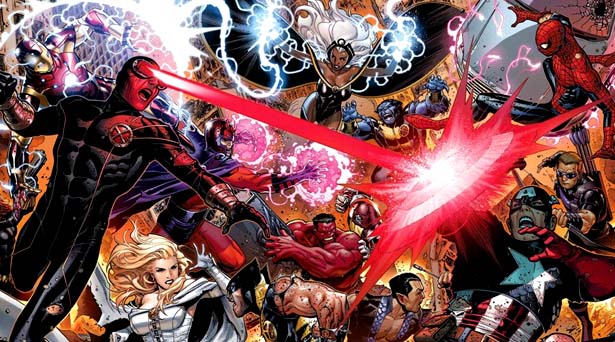 In terms of scale, there are some huge comic book movie events coming up in the next few years – Batman v Superman: Dawn of Justice, Captain America: Civil War and X-Men: Apocalypse, for example – but none of them are bigger than the double event that is Avengers: Infinity War.

The two-part movie will take place in 2018 and 2019, and will see the collective might of the Avengers, the Guardians of the Galaxy, and their allies put to the test against the cosmic power of Thanos and the Infinity Gauntlet (and whatever else the Mad Titan brings to the table).

The battle could destroy the universe – and it really doesn’t get much bigger than that – but there have been plenty of comic book stories that would make equally huge movie events if they were adapted onto the big screen.

In this article, we’ll take a look at ten stories that would make movies equally as epic as the Avengers: Infinity War offerings. 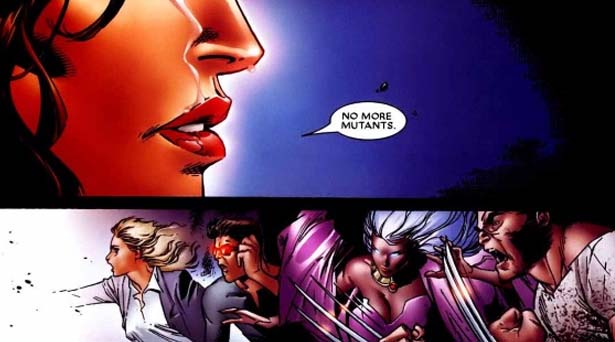 House of M would, perhaps, be a difficult movie to produce, given that one of its main characters – Scarlet Witch – is a Marvel Studios character at present, but given that both Marvel Studios and Fox have used Quicksilver, it’s surely not impossible.

The story deals with the aftermath of Scarlet Witch’s mental breakdown following the loss of her children. Subsequently, she used her massive power to remove the mutant abilities of nearly of all the other mutants in the world, simply by saying, “No more mutants.”

In the X-Men movie franchise, this would be a catastrophic event, as the likes of Hugh Jackman’s Wolverine, Patrick Stewart/James McAvoy’s Professor X and Ian McKellen/Michael Fassbender’s Magneto would potentially be reduced to being completely normal humans. 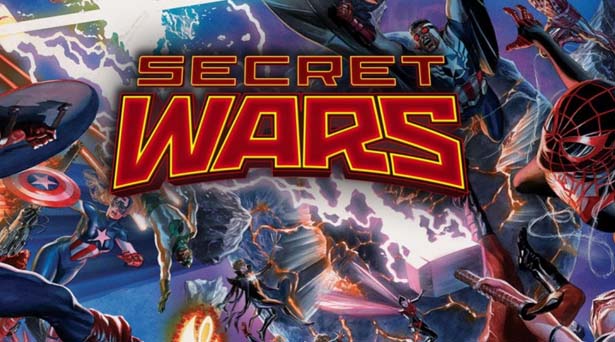 There are actually two Marvel comic book stories called Secret Wars – one from 1984-85 and one from 2015 – and they have similar themes, but for the purposes of clarification, we’ll be referring to the 2015 version here.

It’s an epic event in which various Marvel universes – including the classic 616 universe and the Ultimate universe – collide to form one big patchwork world called Battleworld, where various versions of the same Marvel character can exist at the same time.

The reason for this strange mish-mash of worlds is that every universe in Marvel’s multiverse is in danger of being destroyed, and the only way to save them is to combine them into one. It results in a totally unique story, in which Doctor Doom is revealed as the orchestrator and God Emperor of Battleworld. It would make one wicked (but, frankly, probably impossible) movie. 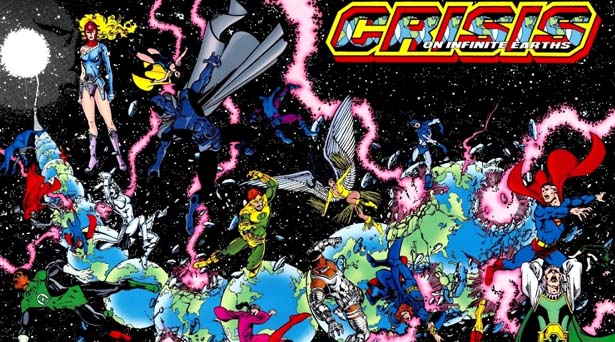 Crisis on Infinite Earths was an epic DC Comics event that took place in 1985 and 1986. It saw the death of the Monitor – the cosmic being who watched over the multiverse – and the subsequent attempts of his evil counterpart, the Anti-Monitor, to destroy it.

Such was the power of the Anti-Monitor that he was literally wading through multiple universes, consuming them and gaining more power as he did so.

It was then up to the heroes of the DC universe to band together in an attempt to stop the mighty being – it’s very similar to what the Avengers and their allies will be attempting in Avengers: Infinity War against the Mad Titan Thanos, but on an even larger scale. It would make for a truly superb movie. 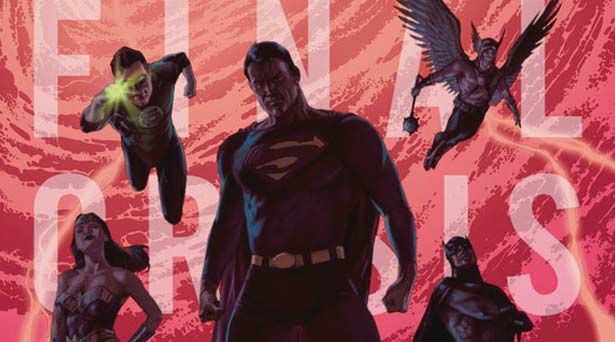 There were actually three potentially universe-ending “crisis” stories in the DC universe, but it would be very boring to include them all here. As a result, we’ve opted for what we believe to be the best two – the first being the aforementioned Crisis on Infinite Earths and the second being 2008’s Final Crisis.

Final Crisis was supposedly the final battle of Darkseid, which would ultimately result in his glorious death, and it pitted the heroes of the DC multiverse against the reincarnated denizens of Apokolips, as well as the evil Mandrakk.

It essentially involved Darkseid’s spirit ending up on Earth, where it manifested in a human body and assembled a supervillain army. It would be an absolutely awesome movie and, with Darkseid seemingly coming to the big screen, a version of it actually seems plausible.

The combined box office gross of the two franchises exceeds $12 billion, so imagine if the two could be combined into one super franchise! It seems impossible, but, if it were to happen, a movie based on the Avengers vs. X-Men comic book arc would be pretty damn awesome.

Seeing the live action Avengers going up against the live action X-Men would be incredible. Chris Evans’ Captain America versus Hugh Jackman’s Wolverine? Superb! Famke Janssen’s Jean Grey versus Elizabeth Olsen’s Scarlet Witch? Amazing! There would be so many awesome possibilities, and it would be epic, but it would take a remarkably unlikely deal for it to happen. 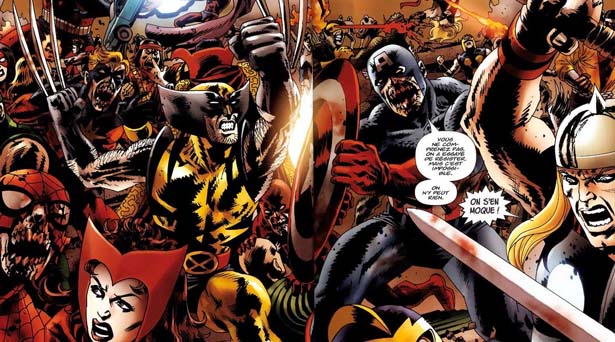 What’s popular in the world of pop culture right now? That’s right, comic book movies and zombies (the Marvel Cinematic Universe and The Walking Dead are arguably the two biggest things on the big and small screens, respectively) – so wouldn’t it be good to combine the two?!

That has essentially already been done in a comic book, with Marvel Zombies seeing the entire Marvel universe plagued with a zombie epidemic that turned some of the most powerful into mindless, flesh-eating, undead beasts. 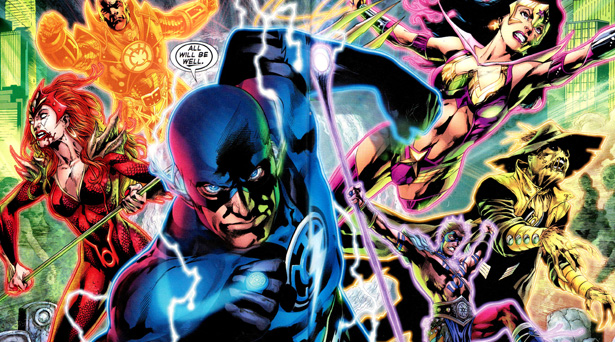 On a very similar note to the last entry about Marvel Zombies, Blackest Night combines the world of comic books – in this case, DC Comics – with zombies. And it would make an awesome movie for those exact reasons.

There’s a little more to Blackest Night than there is to Marvel Zombies, however, as the story sees the emergence of a new Corps – the Black Lantern Corps – that brings dead superheroes and villains back to life in order to become powerful, nigh-unkillable, undead members who fight for their cause.

Their emergence results in the other Corps – who usually fight each other – having to combine their forces to defeat them. And some new recruits to each Corps – Lex Luthor as an Orange Lantern, for instance – would make things very interesting. It would make an awesome DC movie. 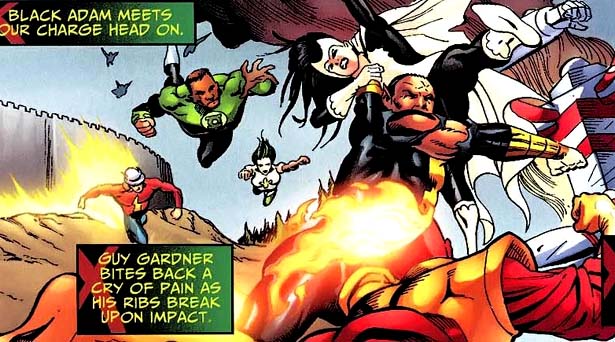 World War III is the title of two similar stories in DC Comics, but the one we’ll be referring to here is the 2007 story that occurred in the new 52 continuity. It tells the story of Black Adam’s rage-fueled war against humanity after his family is murdered – and that would make a hell of a movie.

Why? Well, for starters, Dwayne “The Rock” Johnson is playing Black Adam in the DC Extended Universe! The flagship action star of the modern era in the starring villainous role would be pretty damn awesome.

The heroes of the DC universe have to step in to take Black Adam down – it’s a bit like World War Hulk in the Marvel universe in that sense – and it would be fantastic to see the likes of Henry Cavill’s Superman, Ben Affleck’s Batman, Gal Gadot’s Wonder Woman, and countless other superheroes being torn apart by the angry Black Adam on the big screen. 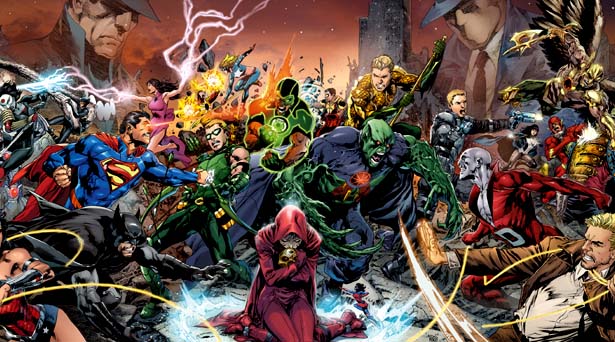 Everyone’s excited about Captain America: Civil War, as it will split the Avengers right down the middle and see two teams of superheroes doing battle against each other on the big screen . But what about if three teams of superheroes were to do the same thing? That’s what 2013’s Trinity War is all about! 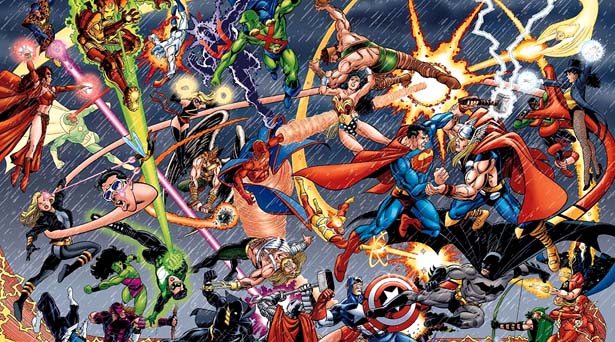 Of course, the ultimate comic book movie event would be a crossover between the live action characters from Marvel and DC movies. It wouldn’t matter what the nature of the crossover was – i.e., whether or not it was a team-up or a versus event – crowds would absolutely flock to see it, and it would be truly epic.

A great example story for such an event would be the JLA/Avengers crossover from the comic books, in which the two teams from each company are set against each other to collect twelve items of power (six from each universe).

Imagine Henry Cavill’s Superman versus Mark Ruffalo’s Hulk. Imagine Ben Affleck’s Batman versus Chris Evans’ Captain America. Imagine Robert Downey, Jr.’s Iron Man versus Ray Fisher’s Cyborg. Imagine Gal Gadot’s Wonder Woman versus Elizabeth Olsen’s Scarlet Witch. It would be incredible, but sadly, given that Marvel Studios doesn’t even have the rights to all of Marvel’s characters, it’s hard to see a deal between them and Warner Brothers that would allow both sets of characters to appear in one movie.

What do you think? Could these movies be as big as the Avengers: Infinity War movies, if they were ever made? Which of the others could? Have your say below! 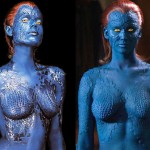 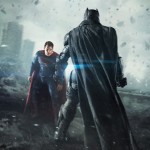